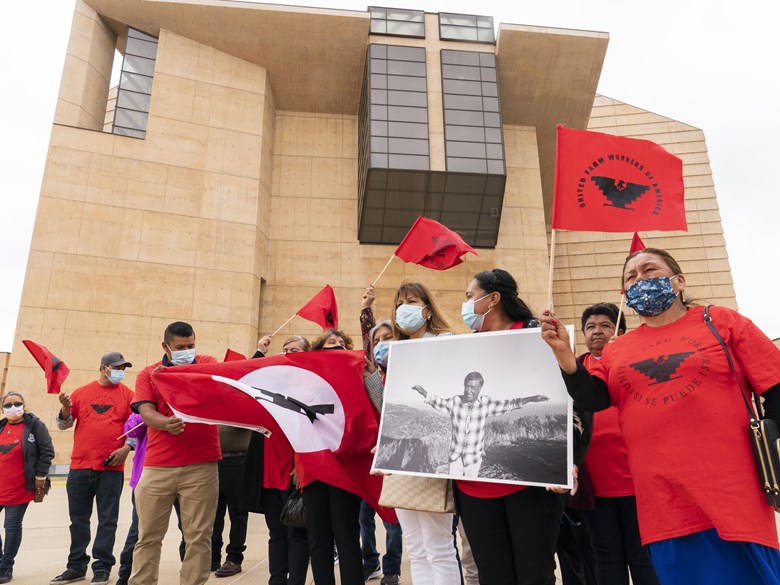 Members of the United Farm Workers (UFW) cheer outside the Cathedral of Our Lady of the Angels after a Mass honoring Cesar Chavez, Sunday, April 3, 2022, in Los Angeles.

CapRadio reporters share their latest reporting on California’s CARE Court proposal and how it could impact local governments. Members of the United Farm Workers union near the end of their march through the central valley to pay homage to its founders and highlight the rights they’re still fighting for today. A journalist and Sacramento State professor prepares to launch his third season of the “What is California?” Podcast.

A proposal promising to help mental health and substance abuse services to the most severely impaired Californians is making its way through the state legislature and soon faces a key vote. The “Community Assistance, Recovery and Empowerment Court,” more commonly known as CARE Court, was announced earlier this year by Governor Newsom as a new solution to the homelessness crisis through court-mandated treatment and intervention to help those unhoused get off the streets and away from jail. The Governor pitched this as the state taking more responsibility to change the “status quo” to reduce the growing number of people who are living and dying on the streets. But civil rights groups in California and across the country are pushing back. And California’s county governments, who would be responsible for implementing this plan, are also raising red flags. CapRadio Reporters Nicole Nixon and Chris Nichols joined Insight to share their reporting on where the proposal currently stands and its potential impacts.

UFW march to the Capitol

The United Farm Workers are making their way to the steps of California’s state capitol to demand Governor Gavin Newsom sign Assembly Bill 2183 after vetoing the “voting choice” bill last year. UFW says it would allow farm workers to vote free of intimidation in secret or wherever they feel safe. Leading the 335-mile march that began in Delano in Kern County just north of Bakersfield is current “United Farm Workers” president Teresa Romero. Our very own Insight assistant producer, Victor Corral Martinez, joined her on the pilgrimage earlier this week while they were in Galt marching through Hope Road in the farming backroads of Sacramento County and discussed why the march was necessary. Insight also invited Adem Echelman from the Modesto Bee and Dr. Edward Flores from the UC Merced Community and Labor Center onto the program to discuss the march.

"What is California" podcast

Our final on Insight shares our passion for deeper conversations with notable Californians to better understand our history, culture, environment, and politics. Stu VanAirsdale is a journalist and lecturer at Sacramento State and hosts the “What is California?” Podcast. VanAirsdale, whose previous work has been featured in the New York Times, Slate, Esquire, and Vanity Fair, launched the first episode of his podcast last September with the goal of better understanding the Golden State through conversations with noteworthy residents. Since then, he’s produced two seasons and a third is set to be released in September.