The Psychological Toll Of Living In The Shadows 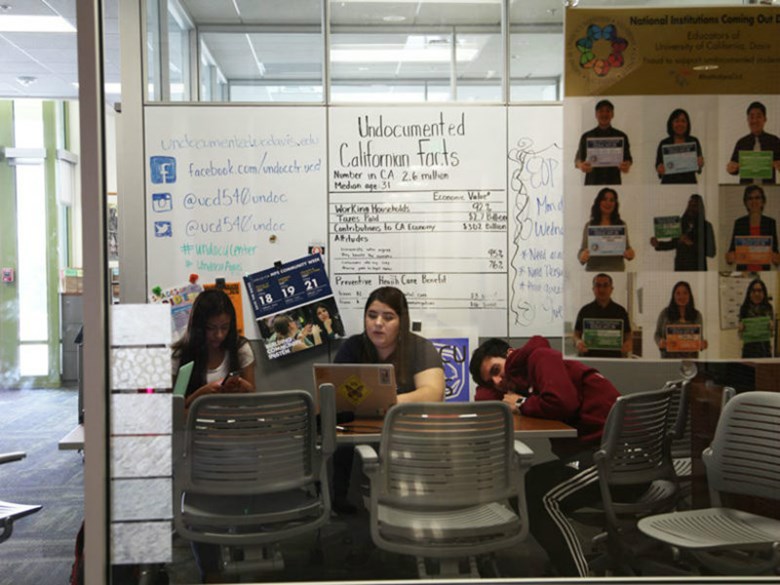 In the next installment of Capital Public Radio’s year-long initiative exploring the lives of undocumented immigrants in California, its documentary unit The View from Here looks at the hardships of navigating a relationship when one person isn’t legally allowed to be in the United States.

M. Esmeralda Zamudio is a doctoral intern at UC Davis who has been studying the emotional and psychological effect of living in the shadows as a college student in California.

In her interviews, Zamudio has found college is a difficult process for undocumented students. Mainly, because they have to disclose their status to different people during their college career to gain access to resources.

“A student going through the college application process once told me ‘I’ve never had to come out this much,’” Zamudio says.

Her research has found that the number one stressor for undocumented students is financial aid.

“Students without legal status have to disclose their status multiple times to different people to gain access to financial aid,” Zamudio says. “This creates a sense of fear and anxiety in students.”

It also creates mistrust. Some financial aid administrators don’t understand the DACA, Deferred Action for Childhood Arrivals, or Dream Act paperwork and deny a student. The student internalizes this rejection and feels mistreated and misunderstood. They think it’s because of their status.

“It garners mistrust, being undocumented,” Zamudio says. “Students feel judged and misunderstood during this process. They feel looked down upon because of their status.”

Many undocumented college students are also working twice as hard as students who were born in America.

A lot of undocumented students were brought to America during their early school years and couldn’t speak the language. They fell behind other students and are having to work harder to catch up.

Plus, many undocumented students are supporting themselves and their families back home, either in the U.S. or in their country of origin, according to Zamudio’s findings.

“Many of them are first generation college students. Their families may not know how to support the student or what is expected from the student. Parents don’t know how to advise their son or daughter,” Zamudio says.

In many of the Latino cultures, these students still have roles at home as well. Everyone contributes.

“Just because you’re in college doesn’t mean you don’t contribute,” Zamudio says. “They’re still expected to contribute as much as they did before they went to college.”

Many students return home every weekend while in college.

This ‘family time’ cuts into a student’s time for studying and socializing, giving them a different college experience from many of their peers.

A common thread for many undocumented students is feeling misunderstood by their peers and professors. This filters into social interactions. Social anxiety is common.

“If you’re already shy or low key, then social interactions can be anxiety provoking for an undocumented student,” Zamudio says.

There is a huge impact emotionally when you can’t connect with your peers. It tends to be more negative. But some undocumented students become empowered by the act of ‘coming out’ as who they are.

Zamudio is hoping her research will help demystify the stigma and anxiety of being undocumented.

“We always ask students to tell us about a time when they were let down and who they can trust,” Zamudio says. “Many students disclosed their status to a counselor in high school and were let down because the counselor didn’t know what to do with them. This shatters their ability to trust administrators and people who hold the key to important resources.”

Zamudio’s dissertation is still in process. It’s a qualitative study and she spoke with 12 students from different education systems, four from UC Berkeley, four from San Francisco State University, one from City College of San Francisco and three from American River College in Sacramento.

Next on her list of research is looking at the effects of people who are undocumented and queer.

Zamudio identifies as Mexican-American Queer Chicana from San Francisco with immigrant parents. Her parents immigrated in the 1980’s when they were able to get asylum, residency and eventually citizenship.