It’s still unclear how bad the much damage the earthquake in Napa caused, but it has definitely hit wineries in the region harder than many recent disasters. A flood and a root louse epidemic in the 1990’s killed grape vines but vintners were able to adapt because the damage came during the early phases of the wine making process. This week’s earthquake was so damaging to the Napa wine industry because it wiped out barrels and bottles of finished wine, ready for market. Joining us with an assessment of the damage is Paul Wagner, founder of Balzac Communications and Marketing, a wine industry PR firm, and Paul Leary, President of Blackbird Vineyards and a board member of the Napa Valley Vintners Association. 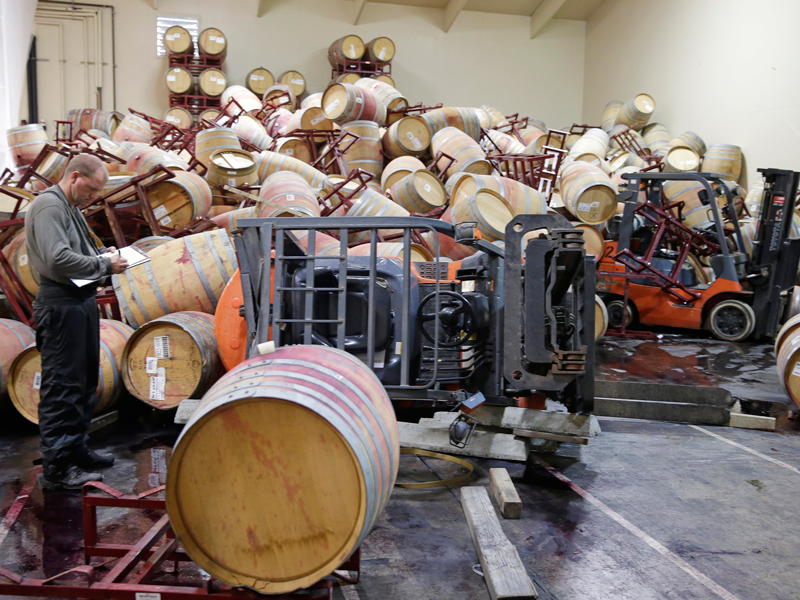 Cellar worker Adam Craig looks over some of the hundreds of earthquake damaged wine barrels that covered and toppled a pair of forklifts at the Kieu Hoang Winery Monday, Aug. 25, 2014, in Napa, Calif. A powerful earthquake that struck the heart of California's wine country caught many people sound asleep, sending dressers, mirrors and pictures crashing down around them and toppling wine bottles in vineyards around the region. The magnitude-6.0 quake struck at 3:20 a.m. PDT Sunday near the city of Napa. Eric Risberg / AP