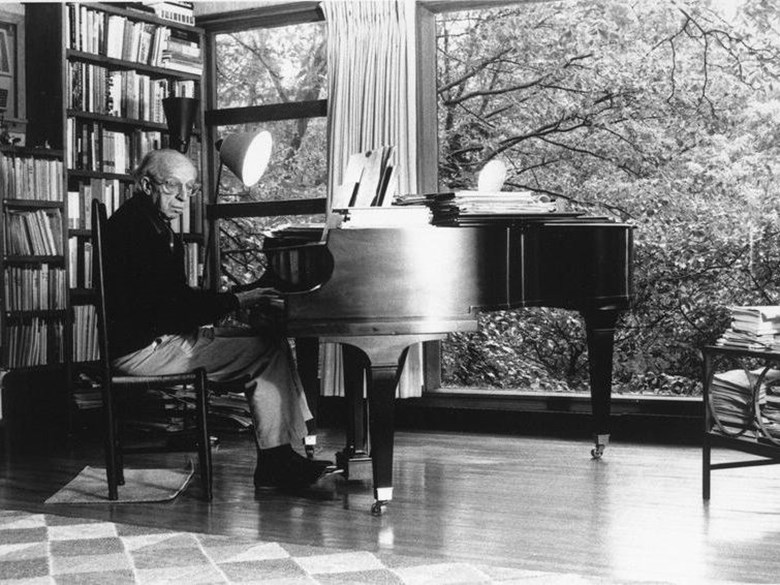 Aaron Copland at his piano.

Hi. I am Kevin Doherty and I am so excited to be here in Sacramento and to be a part of your public radio station, Capital Public Radio, as the new Morning Drive Classical Music Host.

When asked to do Insight, I thought it would be a great opportunity to share some of my favorite music with you as well as the perfect opportunity to share a little bit about myself. The pieces that I have chosen have three common threads. First, you’ll notice an evolution of American Music. Second, since I am from New York, I wanted each piece to have a New York flavor. And third, each piece holds a personal connection for me.

1) The first piece that I would like to share with you is the “Largo al Factotum” from Gioacchino Rossini’s The Barber of Seville. As an opera singing baritone, this is the piece that I have sung more than just about anything else. Rossini’s most famous opera was the first to ever be performed in Italian in New York in 1825 and in many ways represented the dawning of the operatic age in America.

2) I chose the second movement from Antonin Dvorak’s Ninth Symphony, the Symphony from the New World because of the composer’s desire to find “a voice” for American music. Dvorak believed that the true heart of American music came from the tunes of Native Americans and from the spirituals of the African-Americans. The main theme of this second movement extracted by a student of Dvorak’s and turned into a song. That song is called “Goin’ Home” and has actually been mistaken as a classic spiritual. The theme is entirely original to Dvorak. The Symphony from the New World premiered at Carnegie Hall in 1893 and is one of my very favorite symphonies.

This next clip is a bonus track - Paul Robson singing the song “Goin Home.”

3) The ballet, Appalachian Spring is without a doubt, an American staple. If Dvorak started the search for “a voice” for America, then Aaron Copland found it. Copland was born in Brooklyn, but studied composition with the greats in Paris including Nadia Boulanger. When he returned home, Copland would be well on his way to becoming the “Dean of American Music.” I’ve chosen the Variations on the Shaker tune, “Simple Gifts” because it is so simply American. Which is in a sense why Copland chose it as well.

Note: The Ansel Adams photography really adds a little something to the clip. Just when you thought it couldn’t get more American…

4) Finally, I have chosen the “Agnus Dei” by Samuel Barber to close out the segment. The “Agnus Dei” is the choral arrangement of Barber’s uber-famous Adagio for Strings. This is simply one of the most beautiful arrangements of this piece I have ever heard. In college (Ithaca College, NY), I had the honor of singing this with a choir of amazing singers. There were 40 of us and we all had the same moving and magical experience that night (there are no words). At right around 6:38 in the following clip, you’ll hear what I’m talking about.

Thank you CapRadio listeners for opening your arms and welcoming me to your family. I am truly looking forward to a wonderful partnership. And I hope you enjoy the music!