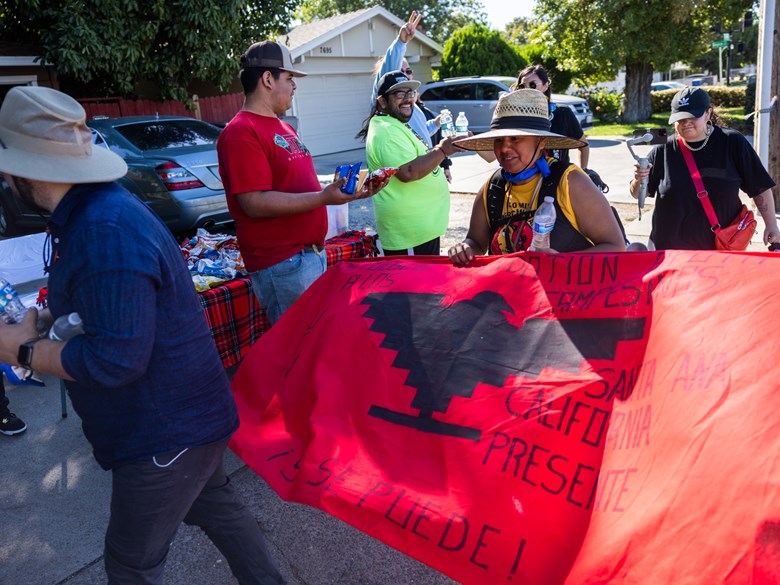 A group of Sacramento residents hand out water and snacks to marchers supporting AB2183 Thursday, Aug. 25, 2022.

The latest on a bill to allow farm workers the right to vote for union representation by mail or through a “card check” system. A trauma surgeon and professor who responded to the 2017 mass shooting in Las Vegas shares their research on “best practices” for emergency rooms responding to mass shootings. A preview of this weekend’s “Chalk It Up” event, which benefits art programs in Sacramento.

United Farm Workers have seen a fraction of union membership since the historic days of Cesar Chavez, Dolores Huerta, and Larry Itliong. Four weeks ago, UFW embarked on a 335-mile pilgrimage from Kern County to the State Capitol in support of a bill that they say would ensure labor rights by allowing farm workers to vote by mail to unionize as opposed to solely voting in person. But Governor Newsom said he would not support the bill as is, and he vetoed a similar bill last year. With the legislative session quickly closing, Insight looked at where things stand by speaking with Teresa Romero, President of UFW, who talked about what compromise looks like, and Fresno Bee Reporter Melissa Montalvo whose been reporting on the negotiations.

October 1, 2017, became America’s deadliest mass shooting in modern history at the Route 91 Harvest Music Festival across the Las Vegas strip from Mandalay Bay. Fifty-eight people died late Sunday evening, and more than 800 were injured. As a journalist, Insight host Vicki Gonzalez was there. She spent the first week of the aftermath listening to emergency responders, families, and victims sharing their voices. Mass shootings are hard to fathom until confronted with that level of violence, but it’s a reality that is growing in numbers and death toll. Fifteen of the deadliest mass shootings have happened since 2000, seven in the last five years alone. Dr. Deborah Kuhls, a Trauma and Critical Care Surgeon at University Medical Center in Las Vegas, is taking her response to the mass shooting and funneling it into research to help others in emergency response. Vicki talked with Dr. Kuhls about working with medical colleagues across the country who also responded to mass shootings about developing “best practices” to save lives.

Chalk it up festival

We all know it’s going to be a blazing hot weekend here in Sacramento. Excessive heat is forecasted all weekend, but that’s not stopping one of Sacramento’s favorite festivals from happening. The Chalk It Up chalk art and music festival at Sacramento’s Fremont Park will celebrate its 32nd year this weekend. Artists take over the entire square block surrounding Fremont Park and turn each square of the city block into spectacular works of art, and the creativity is quite stunning. Will Morris, a Chalk It Up Board member, joined the program to explain how the money raised during the festival helps improve art education and art programs all over Sacramento.