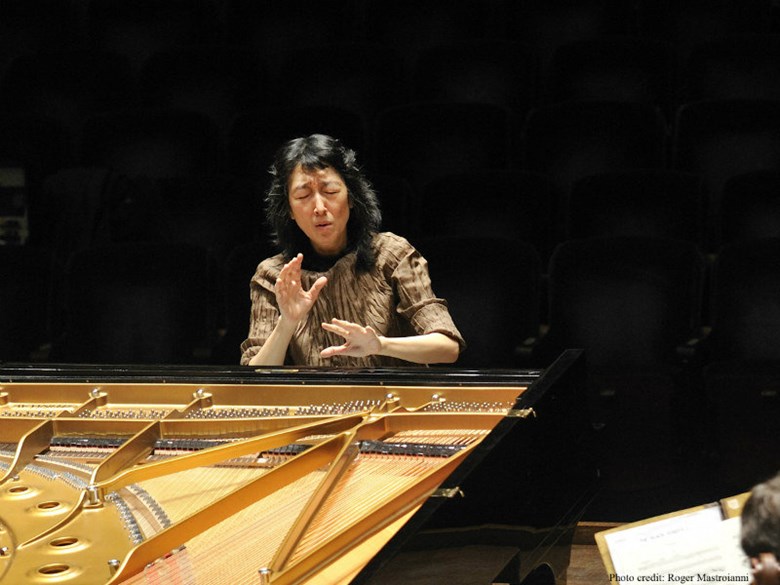 Classical music might not be enough to calm the unsettled atmosphere surrounding this week’s elections – but it can help.

I always like to start with Mozart. It’s a great way to cleanse the palate. It’s clean, it’s elegant and it’s virtuosic.

This is a live performance of Mozart’s 25th Piano Concerto. Mitsuko Uchida performs with and conducts the Cleveland Orchestra. What I love about this piece, and you’ll hear it in the excerpt, is that the piano doesn’t just serve as the soloist but is also part of the orchestra. You can hear how Mozart moves the piano in and out of the ensemble. At one point it has the theme and then passes it off to the woodwinds and does so in a very seamless manner.

The crazy thing about this performance and any recording with piano, Cale Wiggins and I were just talking about this the other day, is that it’s really complicated to record piano and orchestra. The piano is an orchestra in and of itself and putting the two together can be tough. Oftentimes they take bits and pieces of several recordings and patch them together, but this is live and done in one shot. That is a testament to Uchida’s playing.

Johannes Brahms. Double Concerto in A Minor for Violin Cello and Orchestra: I. Allegro - Joshua Bell, violin; Steven Isserlis, cello; The Academy of St. Martin in the Fields

Brahms actually wrote this piece to try to make amends with an old buddy, the greatest violinist of his time, Joseph Joachim. Joachim was not a very confident guy and was convinced that his wife was having an affair with Brahms’ Publisher. Brahms did not believe it so he came to the defense of Joachim’s wife, Amelie. This caused a major rift in their friendship. This concerto acts as kind of an olive branch toward the rekindling of their friendship as Brahms called on Joachim to play the violin solo. You can hear the back and forth in the violin and cello. It sounds to me like Brahms and Joachim are trying to work it out.

This is the first meeting of the two instruments (after a big, minute long cello solo that almost sounds like a plea from Brahms to Joachim) in the concerto. In my mind Brahms is the cello and Joachim is the violin. It starts out so tentatively and then gets more animated and then even kind of angry until we arrive back at the main theme.

This a masterclass in teamwork by violinist Joshua Bell and cellist Steven Isserlis, who are also great friends and collaborators.

I picked this because it’s a recent “add” to our programming, but also because of the proximity to home. Of course, the San Francisco Symphony is world class and Michael Tilson Thomas is one the best and most sought after conductors in the world today.

Claude Debussy was an impressionist and you can hear that nebulous quality in his music. It's safe to say that Debussy's music often sounds like a Claude Monet painting would look. In his triptych, Iberia, he paints a musical picture of Spanish life. The thing is, he barely spent a full day in Spain in his lifetime. He had the ability to capture the essence of Spain through other means. A contemporary of Debussy’s, Spanish composer Manuel de Falla said “Debussy knew Spain from his readings, from pictures, from songs, from dances with songs danced by true Spanish dancers.”

I feel like we’ve been talking about this album for weeks but it’s really only now entering people’s awareness. I can’t seem to stop thinking about the impetus behind Lara Downes' new recording America Again. It’s all about the "American Dream." What does America mean to each of us? We are going through this existential crisis on all sides of the spectrum these days and I think Downes finds that in this album as she explores what this country means to her.

The piece that stands out the most for me is the spiritual Deep River. This is a song of hope and longing. Downes says it’s the first song that came to mind for her when creating this album. My reaction is "how could it not be?" It’s the quintessential “I am looking for a better world, a better way” kind of piece.