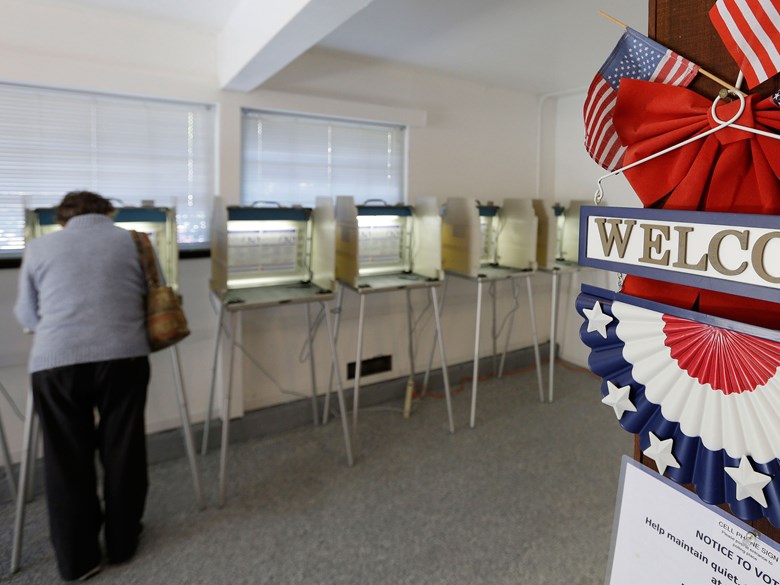 Barbara Lane votes at a polling place on election day in the garage of the Munoz family residence Tuesday, Nov. 5, 2013, in Novato, Calif. Alice Munoz has had a polling place in her garage for the past 40 years.

A field survey by the Institute for Social Research at Sacramento State adds to the polling of likely voters in the Presidential race in California.

Among the interesting results of this CALSPEAKS survey: 20 percent of those eligible to vote in the Democratic primary, were still undecided as of last week in the choice between Hillary Clinton and Bernie Sanders.

“We’ve have done sampling the same way you’d do a telephone survey, but we’re administering that survey online. There are lots of advantages to that,” Nalder says.

Online you can show images, audio and video, and she says people are more honest.

“There’s that desirability bias that we find with telephone surveys or face-to-face surveys where people feel pressure to say the right thing, but if you’re just in front of your computer you’re free to be more honest. So, we’re excited about the poll.”

The 20 percent undecided number stands in contrast to a recent Field Poll survey citing 12 percent of eligible voters undecided in the Clinton/Sanders race. Nalder hypotheses the Field Poll sample might not be as accurate.

“The Field Poll uses registered voter sample only. So, they pull the telephone numbers from a list of registered voters and we’ve had this influx of new voters, especially latinos here in California and I suspect there may be a little bit of a lag in that list. Whereas ours is a comprehensive survey of Californians statewide.”

Why are so many California Democrats and Independents are still undecided is anyone’s guess. Nalder says Clinton is favored by those subgroups who usually turn out to vote, like the elderly and Latinos, while Bernie is very popular with young voters, a group with a bad track record of showing up on voting day.

“It’s a science but it’s also a little bit of an art, predicting what will predict turnout,” says Nalder. “We’re doing the best we think we can.”