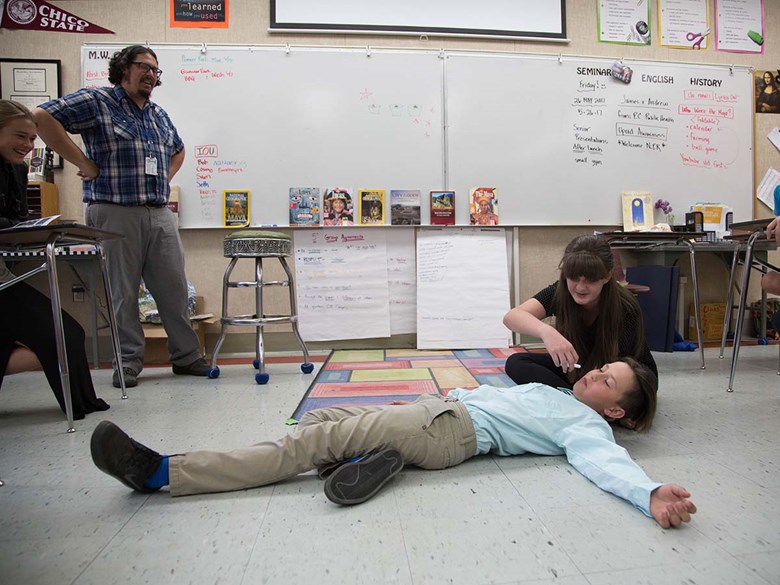 The opioid epidemic remains prominent across the country killing more than 50,000 in 2015, and researches expect that number to worsen.

Plumas County is among the worst hit regions in the nation with the highest overdose rate of any county in the state, but one of the county schools is teaching preventative care for it. An innovative program shows kids how to apply naloxone, the life-saving antidote to a heroin overdose.

Reporter Ali Budner and Plumas County health official James Wilson discuss the innovative program and the epidemic that has not shown signs of waning.

On the scope of the problem

Wilson: Plumas County has had a rough time as far as the opioid epidemic. We've been affected a little bit worse than other counties. We've had pretty high death rates that have been related to pharmaceutical opioid overdoses, actually to the point where we had the highest death rate in California, compared to other counties. According to the latest data released by California Department of Public Health data dashboard, it shows that we've had quite a bit higher. It is a little inflated, Plumas county has a population of a little bit less than 20, 000 people, so when you're comparing it to 100,000, a few overdose deaths can really inflate the rates.

Budner: You hear the words “opiate” and “opioid” but opioid is the word used to talk about all the drugs that both opiates that come from the source of the opium poppy and synthetic versions from this type of drug. So everything from heroin, which is an actual opiate, to Fentanyl, and things like synthetic versions of opioids.

Wilson: Some of the reasons we thought we had such high death rates was we had higher prescribing as well. There has been a lot of work in the last few years but when we first looked at the data which was from 2009 to 2014, we had more than double the rate of prescribed opioids in Plumas County. So we had, per 1000 residents, about 1,400 prescriptions. To put that into perspective, that enough opioids that are being prescribed to keep every man, woman, and child in Plumas county medicated around the clock for 14 weeks each year.

On finding anecdotes or personal stories related to opioids

Budner: I think, especially in places where the rate is really high, you can ask everybody, and they have either a direct or indirect connection to somebody affected by opioid addiction. But theres also a tremendous amount of stigma still, even though it's becoming something people are talking about more.

Wilson: There was an article released in the newspaper here stating that we have the highest death rate related to opioid overdoses, and so the students were wondering why, which is a great question, and definitely something we are trying to figure out, so I went ot the class and asked them what they think what was the reason we had such a high rate. And it was actually kind of surprising, the amount of knowledge they already had surrounding opioids and opioid related overdoses, and so it made sense to take that knowledge to the next level and prepare them as well

On why the students know so much about the issue

Wilson: It's become a bigger issue. When I was growing up it was still a lot in the dark, and no one really knew the dangers or inherent risks of opioids, but a lot of that has come to light, and I think we're having a new generation that hopefully is becoming more responsible, or smarter consumers, just in general, and smarter clients of physicians and whatnot.

On what they were teaching at Quincy Junior High

Wilson:  When we started this coalition, one of the interventions we wanted to do was to try to get naloxone in as many hands of people that are at risk as possible at people at Plumas county, and try to educate as many people as possible on how to use it and possibly save a life. And so that is what we were training them to do at school was training them about what naloxone is and how it is administered and how they can actually save a life if they come across somebody who has had an opioid overdose.

On the kids’ behavior during the presentation

Budner: Like James, I was pretty struck on how much they seemed to already know. It's a room full of seventh graders, 12 to 13 year olds, so they are laughing a lot and giggling, but what I could tell is that underneath that, they were actually really engaged. The conversation that led up to the demonstration that James did, there were so many questions. James could almost barely get to his presentation. They really actually seemed concerned, knowledgeable, and engaged. They seemed to really want to learn about this and be agents of change. They were young but also in the know.

On the two free doses given to schools

Wilson: So far that's not in place in Plumas county, but it's something that is being worked on. There's different procedures that they have to go through to get a board policy passed and that sort of thing. I actually just met with the director of pupil services of Plumas Unified School District yesterday, and the plan is to have an information piece that will be presented to the school board in the July meeting, and then an actual policy will hopefully be adopted by August.

On how the drug works

Wilson: So what it does is it basically blocks the brain’s receptors that are collecting the opiates, and it allows them to breathe again, so they'll go from basically having a few breaths per minute to actually being able to fully regain breath. The idea is to come across somebody, administer naloxone, call 911, and then stay with them. We have our community distribution program where we supply two doses of naloxone per overdose reversal kit. Sometimes the first one doesn't work if they've taken a ton of opioids, and so we give that second one just in case.

On whether know that the drug has been administered and saved a life.

Wilson: As soon as we started the community distribution programs, we've been able to give it to 70 at risk individuals that are directly in need, and we've had two reversals to date that we have recorded. So we know that it is working and we know it's saving lives. Part of the benefits of naloxone is that  it doesn't affect people that are not already on opioids. It is completely harmless to people that aren't overdosed.