Paradise Mayor Jody Jones walked through the devastation of the Camp Fire with Gov. Jerry Brown, Governor-elect Gavin Newsom and President Donald Trump on Saturday. She says her town is ready to rebuild.

On her meeting with President Donald Trump

I found him to be just gracious and kind. He promised federal resources. He said he was going to help us. He said to me, 'We have to help these people. These are my people.' Meaning we're all Americans. We're all in this together. And I was really gratified to see his relationship with the governor and the lieutenant governor and all of them together saying that they're going to work together to help us.

On her experience evacuating from Paradise

I was not at home ... But then I got the emergency alert and tried to get home — my husband was at home — and couldn't because of the fire and all of the traffic.

So we were talking on the phone prior to losing cell phone reception and he said, 'What clothes do you want me to take?' I said forget the clothes, go outside and hook your truck to the motorhome so you can tow it out. This was just a few minutes after we got the emergency notification in the house two doors down and the one across the street were both fully engulfed in flames. So he grabbed our pets stuffed my cat in the shower in the motorhome put his two German short haired dogs in the motorhome and drove off.

I experienced what many many people experienced. Fire on both sides of the road. You could feel the heat through the car. Familiar things were just fully engulfed. The McDonald's was ... the flames were 30 feet in the air as I drove by at it. It just happened so fast.

On whether or not she'll stay and rebuild the town of Paradise.

Absolutely. We will be staying here. We're not naive. We don't think we're gonna be back in a home in Paradise in a few months. In fact we're planning for two years at least. But we are going to rebuild our house and my husband's going to rebuild his office building and my sister is going to rebuild and most of the people that I know are committed to rebuilding in a town. It's probably going to be a smaller town because not everyone is going to come back. 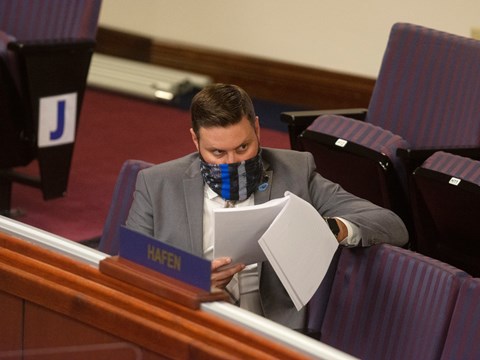 Updates From Nevada’s Special Legislative Session: Here’s What You Need To Know

With Contentious Measures On California’s Ballot, Lawsuits Over Language Pile Up

In Rural California, Some Students Resort To Distance Learning In Parking Lots Near WiFi Connections