President Donald Trump has toured the damage from the most devastating wildfire in California history with two of his most vocal critics: Gov. Jerry Brown and Gov.-elect Gavin Newsom.

“Jerry I have been speaking, and Gavin and I have now gotten to know each other,” the president said while touring a trailer park in the town of Paradise that’s been destroyed by the Camp Fire. “We’re all going to work together and we’ll do a real job.”

“I really appreciate the president himself being here and putting the focus on and the spotlight on probably the worst tragedy that California’s ever faced,” Brown said.

Trump has drawn criticism for blaming California’s deadly wildfires on poor forest management — which experts say is one factor but far from the only one. He’s also sparred frequently with Newsom and, to a lesser extent, Brown.

But as they met to tour the destruction of the northern California town of Paradise Saturday, all three leaders were cordial.

“I think we’re all on the same path. We have to do management,” Trump said, referring to improving forest management and maintenance.

Asked after a briefing on the fire from federal and state officials if the state should have done a better job, Trump simply replied: “A lot of things have been learned.”

“They’ve been working very hard,” he added. “And I think you’re going to see something very spectacular in the next couple of years.”

Brown suggested that there were other factors that are causing the massive wildfires that have struck California in recent years besides forest management, including the drought.

“If we can really look at the facts, from a very open point of view, there are a lot of elements to be considered,” the governor said. “It’s not one thing, It’s a lot of things. I think if we just open our mind and look at things, we’ll get more stuff done.”

Brown has previously also suggested climate change has increased wildfire risk. In fact, the governor’s harshest words toward the president have been on the subject of climate change.

When the three leaders spoke with reporters aboard Air Force One Saturday afternoon, as they flew south to view the damage caused by the Woolsey Fire in Ventura County, they suggested they steered the conversation clear of that topic.

“We’ll let science determine this over a longer period of time,” Brown said. “Right now, we’re collaborating over the most immediate response, and that’s very important.”

“We didn’t discuss it,” Trump said a moment later. “We have different views. But maybe not as different as people think.”

The president also promised a new $500 million provision for forest management nationwide in the upcoming Farm Bill that the outgoing Congress is expected to pass during its “lame duck” session in the coming weeks.

At one point, near the end of the trailer park visit, Trump offered Newsom an opportunity to speak. Newsom, the lieutenant governor whom voters elected last week to replace Brown when he terms out early next year, declined the invitation. 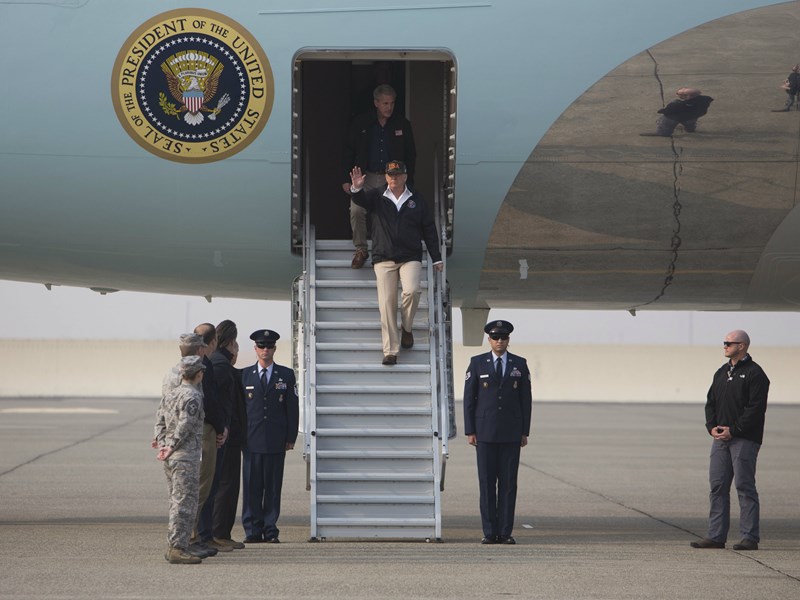 President Trump arrives in Northern California to assess the damage from the Camp Fire.Andrew Nixon / CapRadio

The three leaders rode together in on the president’s Marine One helicopter and motorcade from Beale Air Force Base to the fire zone and back, and on Air Force One.

A spokesman for Newsom’s transition team said this was the first time he had ever met the president. Brown’s office said he had previously met Trump once, as mayor of Oakland.

Roughly an hour before the president’s arrival, Cal Fire released its latest update on the Camp Fire’s damage and destruction. The blaze has now burned 148,000 acres and is 55 percent contained.

With 76 civilians dead — excluding the nearly 1,300 who have been reported missing — and more than 12,000 structures destroyed, Cal Fire calls it the “most destructive and deadliest” fire in the state’s recorded history.