Insight: ACA Insurer Tax / Farm to Fork: Aquaponics / Lord of Rice / "The Only" 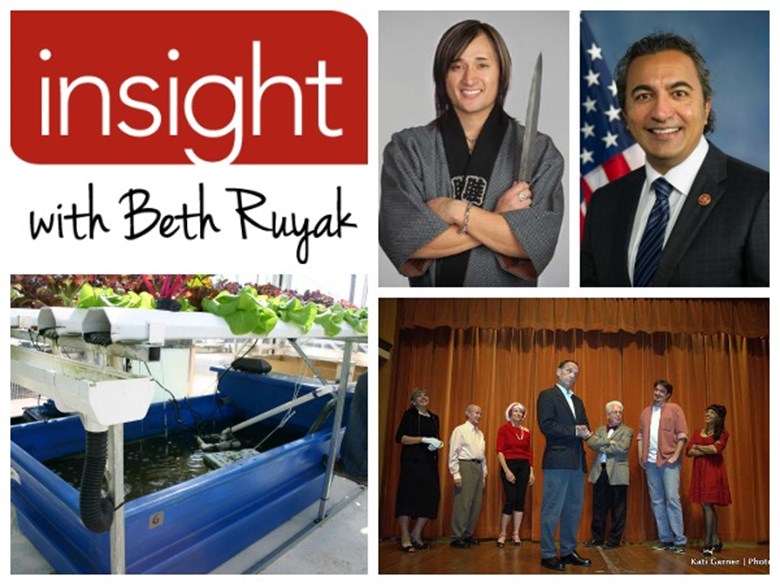 ACA Insurance Tax The text of the Affordable Care Act, which is actually the combination of two bills that were signed into law in March of 2010, is reported to be 381,517 words long on about 961 pages. Naturally, there are parts of the law that still aren’t well-known, including a tax on health insurers to help pay for the law. Congressman Ami Bera wants to delay that tax. Dr. Bera, who represents Sacramento County, is in our studio today to explain why.
Listen to ACA Insurance Tax

Farm to Fork: Aquaponics If you’re unfamiliar with the term aquaponics, you're not the only one. Aquaponics is a type of farming you’d expect to see aboard a space station or in a science fiction film set in the distant future. Plants, like strawberries, are grown in vertically hanging shelves filled with gravel or clay instead of soil. Wastewater from a nearby fish tank fertilizes the plants. Or course, building an ecosystem of this type is a balancing act, but the benefits are great. Aquaponics uses 90 percent less water than conventional soil farming and an aquaponic farm can be built inside an urban core. That's where Brandon Burkhouse comes into the picture. Riding on the momentum of the Farm-to-Fork movement in the Sacramento region, Burkhouse wants to turn an old firehouse in Folsom into a 40 acre-equivalent organic farm that serves the surrounding community. He's currently raising funds for the project and joins us to explain more. You can follow his progress on his Facebook page.
Listen to Farm to Fork - Aquaponics

Lord of Rice Chef Kotaro "Taro" Arai, owner of Mikuni restaurants in Northern California, has won the 5th annual Lord of Rice Contest. Chef Taro will lead the judging in 2013 for the World Best Rice Contest held in Hong Kong Nov. 19 though 21. We'll talk with him about rice, what makes it good and how he uses it. Like Taro's page on Facebook to follow all his adventure at the Lord of Rice.
Listen to Lord of Rice

"The Only" It's not exactly a play set within a play, but it’s close. Award-winning Sacramento-area playwright Leo McElroy's latest drama focuses on the emotionally-charged relationship between a new playwright and a self-styled genius producer/director. "The Only" premiers Friday, Oct. 8 at Sacramento's Theater One and runs through Nov. 24. McElroy joins us to talk about how his real world experience inspired the play. See pictures and get news about Theater One on their Facebook page.
Listen to The Only