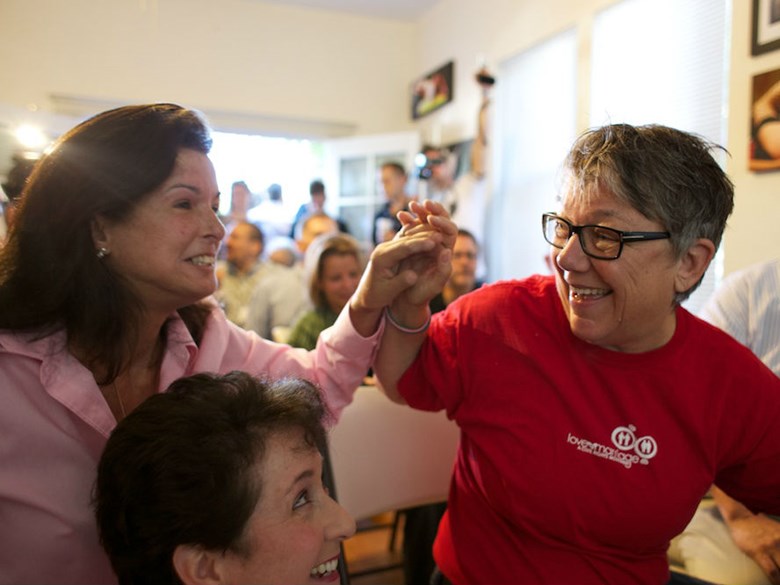 SCOTUS Rulings on DOMA & Prop. 8 The Supreme Court of the United States issued rulings this morning in two cases relating to same-sex marriage. The high court struck down the Defense of Marriage Act, claiming it was unconstititutional for the federal government to make any law singling out people recoginized as equal at the state level. In the case of Proposition 8, the court declined to rule saying it had no standing to do so. That decision could allow same-sex marriages to start in the State of California almost immediately. We'll talk about the decisions and what they mean with University of the Pacific McGeorge School of Law Professor John Sims and UC Davis Law Professor Courtney Joslin.
Listen to SCOTUS Rulings on DOMA & Prop. 8

Prop. 8 Reaction The country has been holding its breath in anticipation of a Supreme Court ruling that could have broad impact on the legality of same-sex marriage. In California, many same-sex couples were hoping the court would strike down Proposition 8 and lift a prohibition on gay marriage. In reality, the court ruled that it - and the defenders of Prop. 8 - had no standing to make that call. We'll hear what defenders of Prop. 8 plan to do next and we’ll get reaction from a Davis couple waiting to get married.
Listen to Prop. 8 Reaction

California's Official Response California’s Attorney General Kamala Harris is explaining this morning what’s next in the wake of a Supreme Court ruling that defers to the state’s ruling that a voter-backed proposition banning same-sex marriage is unconstitutional. Capital Public Radio’s State Government Reporter Katie Orr joins us with a summary of Harris’ standing on the legality of same sex marriage in California going forward.
Listen to California's Official Response