Capitol Chat In this week’s Capitol Chat, State Government Reporter Katie Orr has the latest on allegations Sen. Ron Calderon made this week that the FBI had asked him to record conversations with Senate Pro Tem Darrell Steinberg and Sen. Kevin de Leon. Steinberg denied that accusation Thursday. We’ll also hear about the University of California’s budget discussion – Governor Brown attended the UC Regents board meeting Thursday to provide a bit of a reality check for school leaders. And, signatures to repel a new state law allowing transgendered students to use a school restroom of their choosing are being verified. We’ll hear more.

Friendship Park Loaves & Fishes will submit plans to the City of Sacramento for the creation of a new $1.75 million Friendship Park. The new design reportedly would accommodate twice as many people and shrinks the footprint of the current Loaves & Fishes property. We’ll speak with Executive Director Sister Libby about the project, which could be under construction as early as this summer.

"From the Streets of Truckee"Some of the best history can be found within the lyrics of a song. Take for instance the unique history of Truckee, Calif. Singer-songwriter Richard Blair conjures up images of the Sierra Nevada town’s past in his album "From the Streets or Truckee." From the "Jibboom Street Barber Shop" to "Old Highway 40," Blair’s music brings to life the town of Truckee in the late 1800s. Recently, Blair has been taking his storytelling a bit further by staging live performances that include actors in period attire acting out short skits between the 8 songs on his album.The first show has been received with praise in Truckee, and now Blair is preparing for an encore this Sunday at Cottonwood Restaurant.

Listen to From the Streets of Truckee 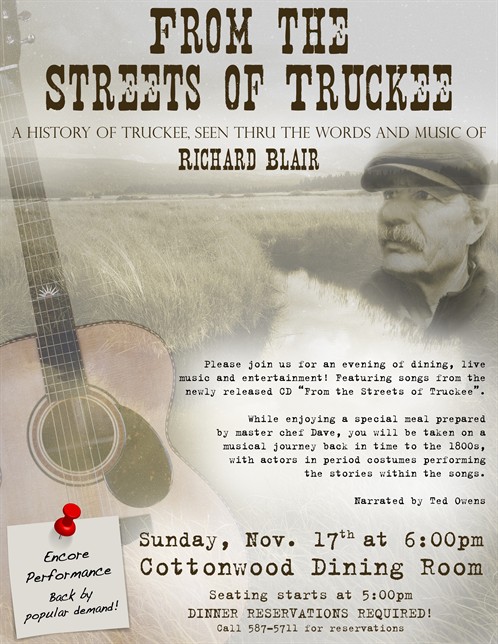 Doug Pauly Quintet The Doug Pauly Quintet, featuring vocalist Meleva Steiert will be in concert at 3 p.m. Sun., November 17 at Westminster Presbyterian Church, in Sacramento. We'll talk with Pauly and Steiert about the upcoming show and what it's like to work together. We'll also hear them perform live in our studio.

Listen to The Doug Pauly Quintet