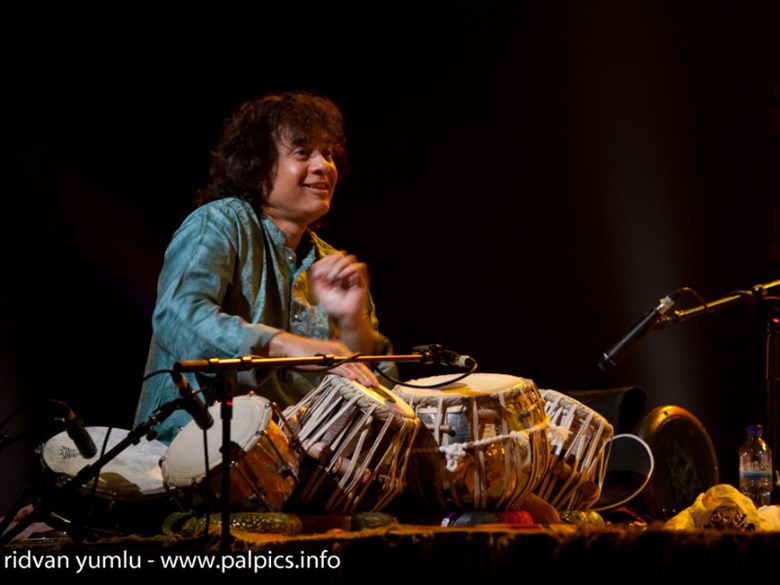 Tracy plays an electric six-string violin… He studied classical violin at Juilliard, but he has a streak of Jimi Hendrix in him as well.  He was the first violin with the Turtle Island String Quartet for a time, he did the premiere recording of John Adams’ concerto “The Dharma in Big Sur.”

Tracy Silverman was with the Stockton Symphony before in 2013, now Stockton is having him back to give the California premiere of a piece written for him by the very hip composer Nico Muhly, “Seeing is Believing.” Also on the program will be Mozart: Eine kleine nachtmusic and Beethoven: Symphony No. 3 (“Eroica”).

Zakir Hussain is an Indian classical musician who grew up in Mumbai, he’s performed in this area several times. I’ve seen him in concert on several occasions, and he is a marvelous performer. He tours all over the world – Europe, North America, India -- and he travels with his tablas, but of course you can’t always find good tabla supplies in every city, so he actually keeps extra sets of tablas, stored in different parts of the world, which can be shipped to him in a matter of hours if he suddenly needs them.

Sharon Isbin will be making her first appearance at the Mondavi Center, with the New York Chamber Soloists. She is one of the major classical guitarists in the world today. In addition to her long career as a performer and recording artist, she was the founder of the guitar department at the Juilliard School, and she directs the guitar program at the Aspen Music Festival. She was the subject of a documentary film in 2014, which has aired widely on PBS stations. She is also a pioneer – traditionally, the classical guitar has been seen as something of a “man’s instrument,” and she has challenged that stereotype again and again.

Joshua Roman began his career about a decade ago as something of a boy wonder with a big head of hair and a remarkable ability with his instrument. He became the principal cello of the Seattle Symphony at age 22, the youngest musician ever picked as a principal with that orchestra. Then Roman launched his solo career at age 24 – in addition to playing the cello, Joshua Roman appears as a speaker on the TED series – they describe him as an “independent-minded cellist.”

Roman is now in his early 30s, with a somewhat shorter haircut, and he’s appeared with quite a few orchestras – including big orchestras like the San Francisco Symphony, where he appeared in 2010, and in our area with the Stockton Symphony, which featured him in 2013. Now he will be appearing with the Sacramento Philharmonic, playing the Dvorak Concerto, which is a big heroic piece from the late 1800s. Conducting the concert will be Edwin Outwater, who was a resident conductor with the San Francisco Symphony for a number of years.

Johann Sebastian Bach’s Birthday is March 21, and what better time to remember that Bach’s music remains one of the most stupendous achievements in Western Civilization.  Let’s go out with one of his amazing organ classics: the Passacaglia and Fugue, recorded by Italian organist Andrea Marcon. I heard Cameron Carpenter play this piece at the Mondavi Center on February 10, and I have a strong hunch that this piece is going to be featured on Carpenter’s forthcoming album “All You Need Is Bach,” which he’s recording in Berlin.