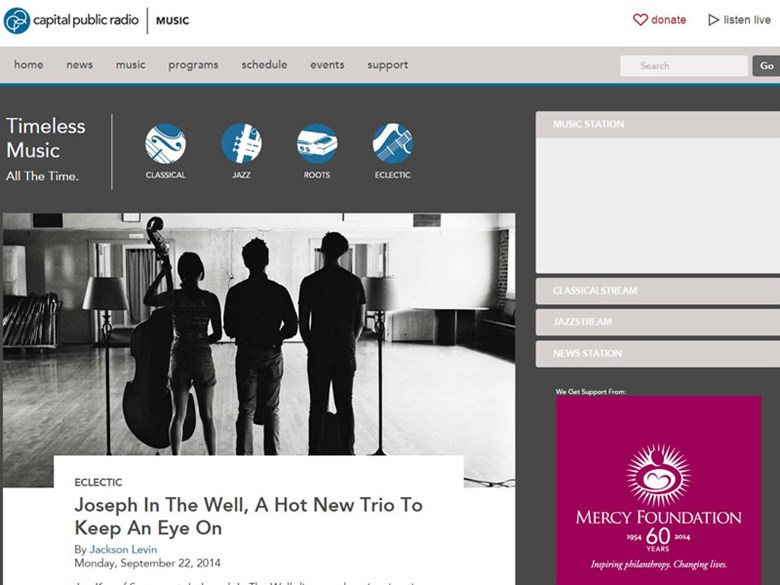 What is CapRadio Music? It’s the section of our site devoted to music news, information and commentary - and it’s where you are. We launched back in June and my role as the site editor involves moving the stories through the editorial process. This week on Sound Advice I’m sharing the music from the stories we’re published this month, and a little TBD Fest preview.

Cave Women are coming out with a brand new EP this evening at Shine Cafe in Sacramento. These ladies all met in the Sac State music department and started playing together in 2011.

I talked with Casey Lipka and Alicyn Yaffee about their upcoming EP - they both said their favorite song is “Second Chances,” written by Emily Messick who plays the melodica, accordion, guitar and piano. “Second Chances” really showcases the group’s ability to layer vocals and bring in a jazzy improvisational feel and world-music flavors to a singer-songwriter pop tune.

You can read more about the group here and the new album here.

Joseph In The Well

We had the privilege of a summer intern here at CapRadio Music. UCLA english and music major, Jackson Levin, flexed his journalistic muscles interviewing musicians and writing articles for CapRadio Music. Last Friday was his last day but he left us with one particularly strong piece about Joe Kye from Joseph In The Well.

Kye talked about immigrating to America at age six and how struggling with communication and national identity played into his music. Kye plays the violin, sings and write the songs. He recently teamed up with upright bassist, Casey Lipka (also from Cave Women) and Tim Stephenson on drums.

All About That (Upright) Bass - Postmodern Jukebox

Meghan Trainor came out with the incredibly catchy and body-positive tune, All About That Bass, back in June and it didn’t take long to shoot to the top of the charts. This caught the attention of song retrofitter (that’s where you make a pop-song retro, right?) Scott Bradlee. Bradlee runs the youtube channel and website Post Modern Jukebox where he takes current pop songs and arranges them in various jazz, doo wop, and motown styles. I took a trip down this youtube rabbit-hole a few months ago; so of course I was delighted to see  “All About That (Upright) Bass” pop up on that channel.

Devin Yamanaka had the same feeling and included this track in this month’s Gettin' Moody playlist, for when you’re feeling benevolent about sharing your car stereo with someone who doesn’t really like jazz, but you’re unwilling to listen to straight pop music. It’s jazz for people who don’t prefer jazz.

These two brothers like photoshopping french horns into places they shouldn't be, hence the name French Horn Rebellion. Robert Perlick-Molinari and David Perlick-Molinari reside in New York City and describe their sound as "basement dance party," which is pretty accurate.

Last year they played LowBrau and met a group of dancers from the Sacramento Ballet; one thing led to another and the band and dancers collaborated to make a pretty awesome video.