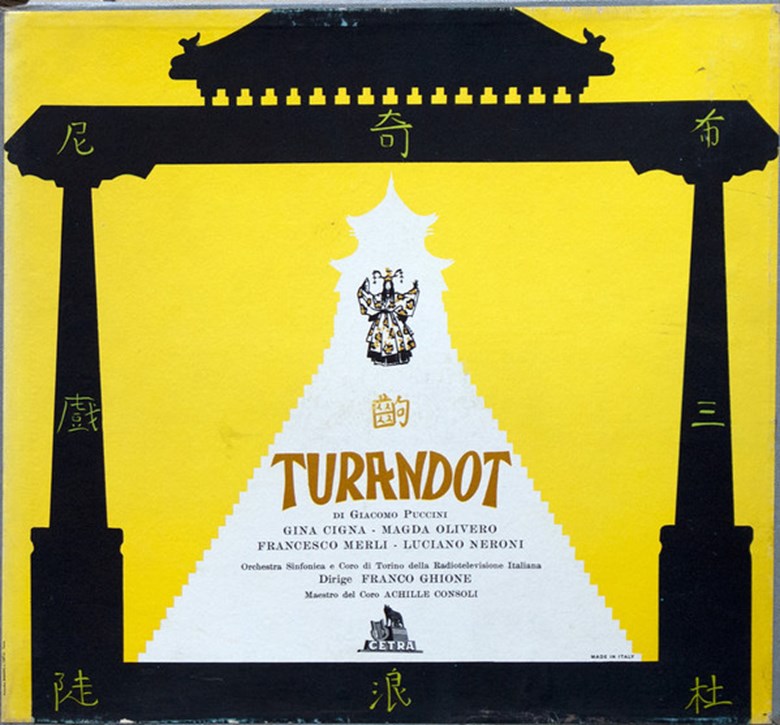 Though Puccini's first interest in the subject was based on his reading of Friedrich Schiller's 1801 adaptation of the play, his work is most nearly based on the earlier text Turandot (1762) by Count Carlo Gozzi. The original story is based on one of the seven stories in the epic Haft Peykar (The Seven Beauties), work of 12th-century Persian poet Nizami. Nizami aligned the seven stories with the seven days of the week, the seven colors and the seven corresponding planets. This particular story is the story of Monday ("moon day"), being told to King Bahram by his companion of the red dome. In the very first line of this story, the protagonist is identified as a Russian princess. The name of the opera is based on Turan-Dokht (daughter of Turan), which is a common name used in Persian poetry for Central Asian princesses.

The opera's version of the story is set in China and involves Prince Calaf, who falls in love with the cold Princess Turandot. To obtain permission to marry her, a suitor has to solve three riddles; any wrong answer results in death. Calaf passes the test, but Turandot still refuses to marry him. He offers her a way out: if she is able to learn his name before dawn the next day, then at daybreak he will die. In the original story by Nizami, the princess sets four conditions. The first is "a good name and good deeds", and then the three challenges.

The opera was unfinished at the time of Puccini's death in 1924, and was completed by Franco Alfano in 1926. The first performance was held at the Teatro alla Scala in Milan on April 25, 1926 and conducted by Arturo Toscanini. This performance included only Puccini's music and not Alfano's additions. The first performance of the opera as completed by Alfano was the following night, April 26, although it is disputed whether this was conducted by Toscanini again or by Ettore Panizza.