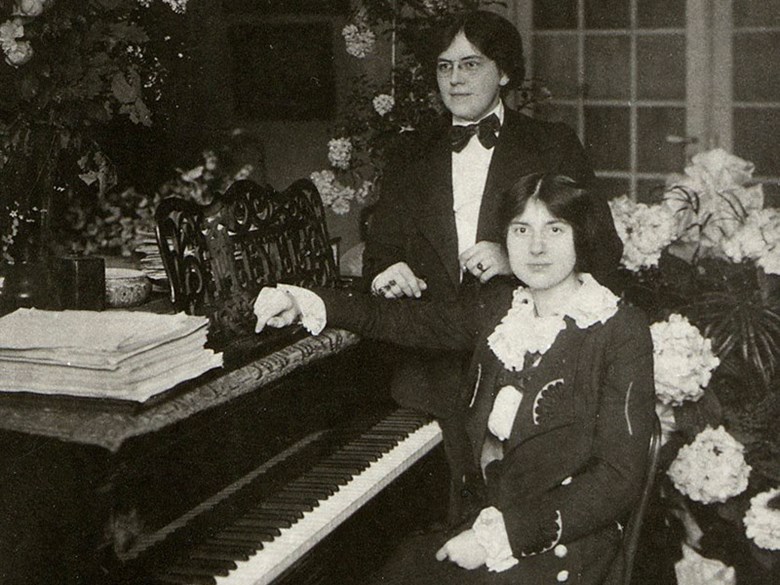 We’re highlighting the life and music of women in classical music every weekday during March, Women's History Month.

Nadia Boulanger was born in Paris 1887 to a father who taught singing at the Paris Conservatory and mother who had been a Russian princess, a student of her father. Nadia attended the Paris Conservatory for seven years from age 10 where Gabriel Fauré was one of her teachers, and Maurice Ravel and Georges Enesco were among her classmates. At the Conservatory she won first prizes in solfège, counterpoint, fugue, keyboard harmony and organ.

Nadia's sister, Lili, was born in 1893 and by age two was recognized as a child prodigy. By age five Lili sat in on classes with her sister and later attended Conservatory classes in music theory and organ. Lili also sang and played piano, violin, cello and harp.

After leaving the Conservatory in 1904, Nadia began to compose and had music published. Needing to make money following the death of their father in 1900, Nadia began to teach with Lili one her first pupils who at age 19 in 1913 became the first female composer to win the Prix de Rome, something Nadia tried four times to win but never did.

The Prix de Rome funds a composer to live three to five years in Italy where Lili completed several compositions. Lifelong ill health forced her early return to France, where she continued to compose until her early death in 1918 at age 24.

Lili's premature death changed the course of Nadia's life, who now focused on teaching both in private and from 1921 at the French Music School for Americans. One of her first students at the school was Aaron Copland. For virtually the rest of her life Nadia also taught privately at her family home.

In 1924 she toured through the United States, performing works by her sister Lili and Copland. Back in France in 1927, George Gershwin sought her out for lessons but told him that she could teach him nothing. (It was this trip that inspired his "An American in Paris.") During World War 2 she taught in the US, and returning to France in 1946 accepted positions at the Paris Conservatory and the American School.

Nadia's greatest legacy is teaching. No record was kept of every student, but she is believed to have taught a huge number of students from around the world as well as over 600 Americans. A few of her students include:

“Nadia Boulanger knew everything there was to know about music; she knew the oldest and the latest music, pre-Bach and post-Stravinsky, and knew it cold. All technical know-how was at her fingertips. More important to the budding composer was her way of surrounding him with an air of confidence.”