Two storms in November have brought snow to the Sierra Nevada, marking a "rapid start to the wet/snowy season" for California, Nevada and other parts of the western United States.

But, it will take much more of the same to make a dent in California’s historic four-year drought. 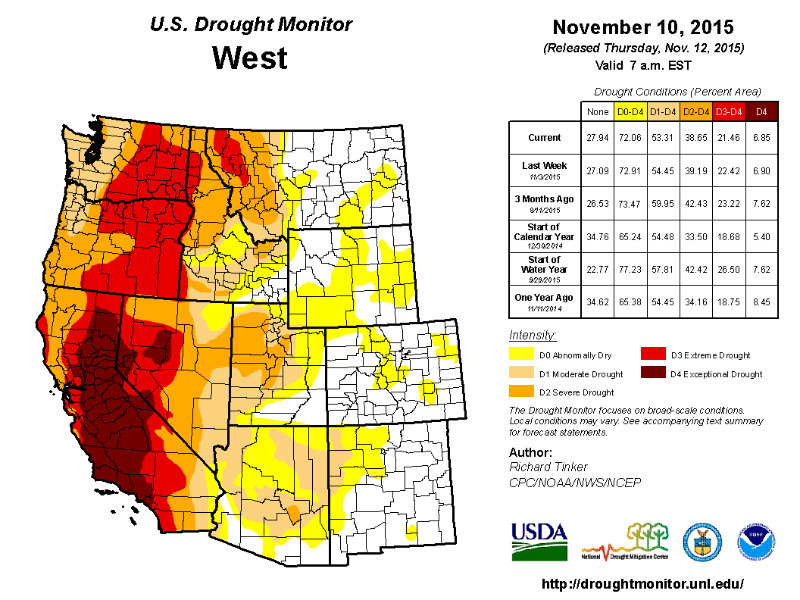 "Snowpack is well above normal for this time of year in the Sierra Nevada and parts of Nevada where drought has seemed intractable, Reno-Tahoe Airport recorded 4.2” of snow November 9-10 (including a daily record 2.4” on the 9th), and over a foot blanketed some areas northeast of the city," according to the U.S. Drought Monitor released November 12.

"But given the long-term nature of the drought in much of the Far West, only scattered areas of improvement were noted," the report said. 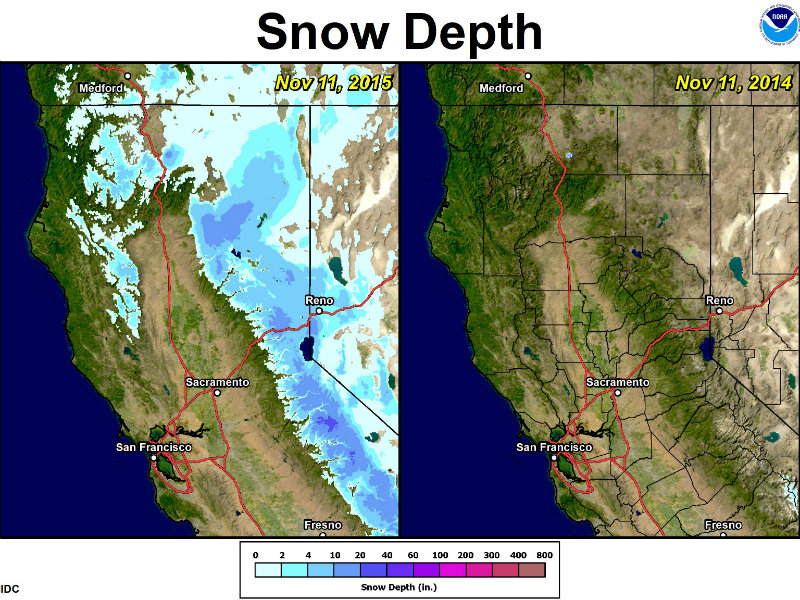 Still, with many ski resorts opening earlier than planned in California and Nevada, after four years of drought, the snow in the Sierra is a welcome sign. 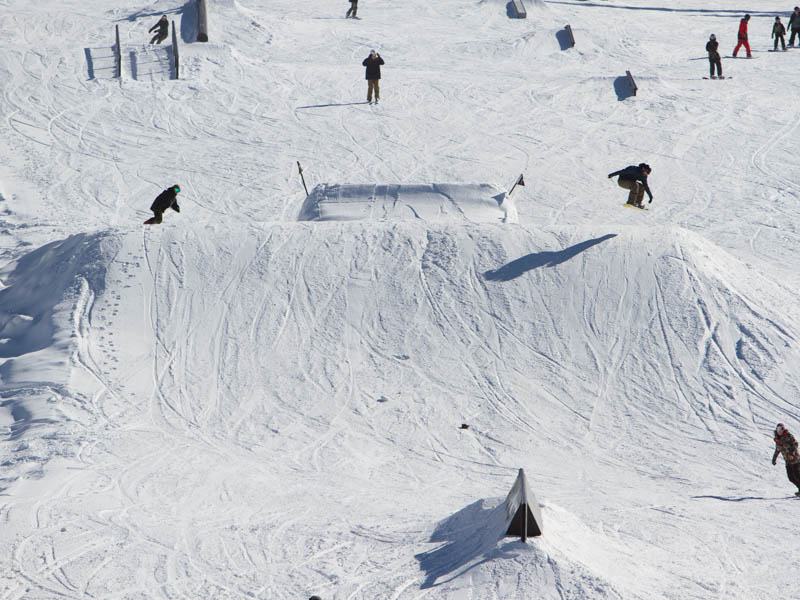 The drought monitor reported that "moderate to heavy precipitation fell on the Sierra Nevada, northwestern California, western sections of Washington and Oregon, northern sections of the Rockies and Intermountain West, scattered areas from western Colorado to central Arizona, and a few other isolated spots. Other locations received little, if any."

The weekly update reports that the "wet/snowy season is off to a rapid start in the Intermountain West and West Coast States" but also says "areas where drought was more entrenched [California] will need abundant precipitation to continue much farther into the wet season before any notable improvement could evolve." 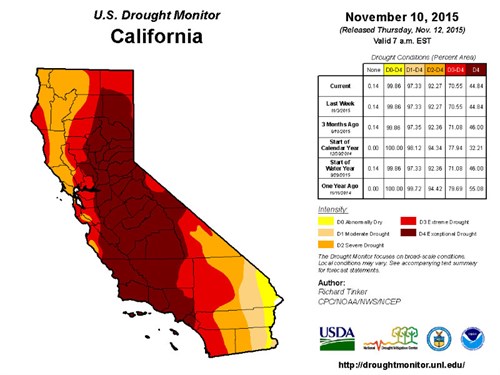 There was a slight decrease in exceptional drought (9.3 percent) in Nevada, but the state remained 73 percent in severe drought and 32 percent in extreme drought.

Other parts of the western U.S. fared better over the last week.

Severe drought eased to moderate levels in central Washington, abnormal dryness was eliminated in northwestern Colorado and there was slight improvement in Idaho, Montana and Arizona.

Oregon and Washington remain 100 percent in moderate drought. But severe drought in Washington was reduced to 66 percent.

Meteorologist Brooke Bingaman with the National Weather Service in Sacramento says another storm is forecast to bring more snow to Sierra next weekend. She says rain will also come to the valleys, "but we need that snowpack to really help pull us out of the drought." 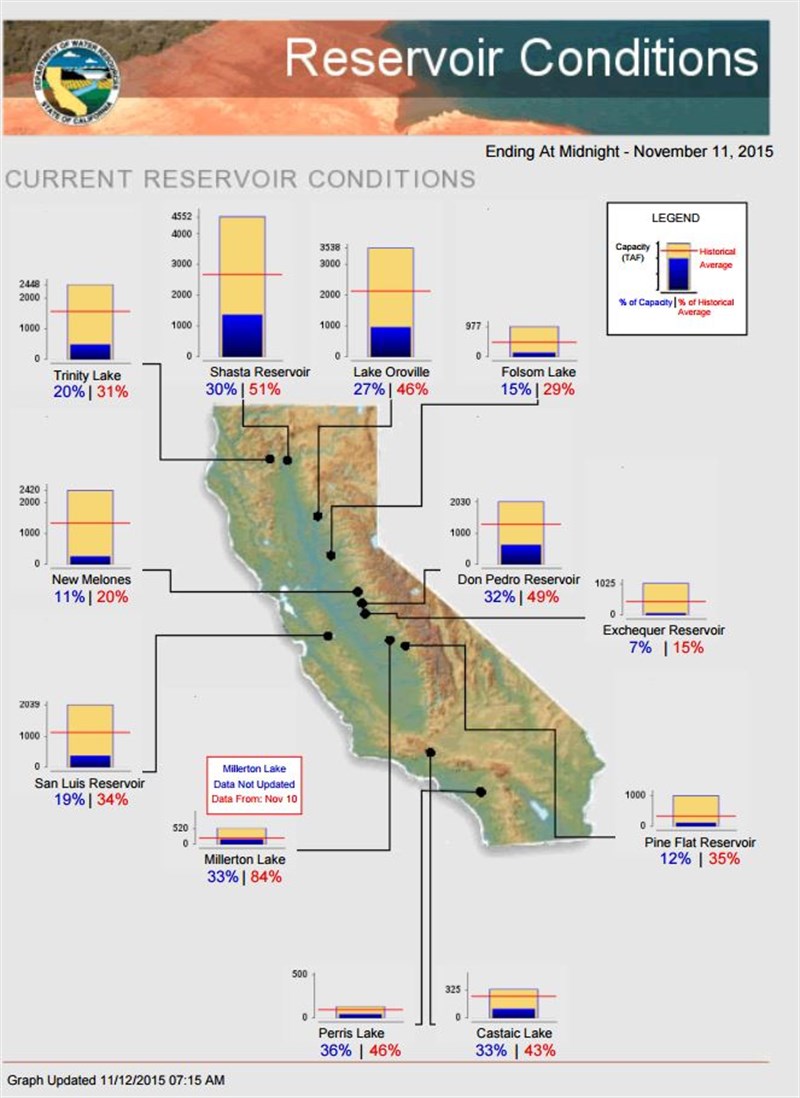 "El Niño has already produced significant global impacts," according to the Nov.12 update. "El Niño is expected to affect temperature and precipitation patterns across the United States during the upcoming months."