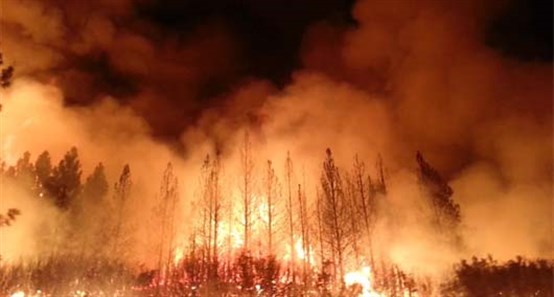 EDITOR'S NOTE: Rim Fire updates will be posted here starting Wednesday, Sept. 4. Additional coverage, as provided, will continue to be added below.

The California Air National Guard is using unmanned aircraft to assist in fighting the Rim Fire, which has grown to 192,466 acres and is 30 percent contained. More than 4,500 personnel are now working to fight the fire. Update: 10:30 p.m.

The Rim Fire has cost more than $27 million, and climbing, but it's also hurting the pocketbooks of people who live there and effecting the local economy as a major holiday approaches.

The Rim Fire continues to spread, but firefighters are making progress on several fronts. Containment is holding at 20 percent, with the fire consuming 184,481 acres of the Stanislaus National Forest and a portion of Yosemite. Update: 11:00 p.m.

People who own businesses effected by the Rim Fire can apply for a temporary delay in having to pay taxes to the State of California.

The fire has grown to nearly 161,000 acres, and the evacuation advisory area expanded as the blaze has jumped a road in the Highway 120 corridor. Containment has grown to 20 percent, thanks to air drops to slow the fire's growth. Update: 10:10 p.m.

Weather conditions have fanned the flames, as the Rim Fire grew more than 10,000 acres today. The fire has burned nearly 144,000 acres, with containment at 7 percent. More than 2,800 people are working the incident. Update: 8:05 p.m.

The evacuation order for some residents in the Rim Fire area has been lifted, although the blaze continues to burn hot. Containment stands at 5 percent late Saturday, with air tankers and helicopters helping slow the fires' progress. Update: 8:55pm

The fire has burned more than 125,000 acres, with containment now at 5 percent as of late Friday. Gov. Jerry Brown issued an emergency proclamation for San Francisco due to threats from the Rim Fire to the utility systems. Update: 11:30 p.m.

The Rim Fire near Groveland in Tuolumne County has grown to nearly 64,000 acres, and additional resources have been assigned to the incident in the Stanislaus National Forest near Groveland. Containment has slipped to 1 percent. UPDATED 10:31 p.m.

The air quality in canyons on the west slope of the Sierra has been in the unhealthy range for all groups range for about a week. But air quality is expected to improve as more of the American Fire is contained and as thunderstorms move in.