The fire has grown to 201,894 acres, with containment at 32 percent. Three commercial buildings have been lost, along with 97 outbuildings and 11 residences.

From the USFS incident report:

Today’s plans are to continue the burnout in the Yosemite National Park south of Hetch Hetchy. If conditions allow, the Duckwall Mountain north to Fahey Meadow burnout will start. Air operations will be used to support all firefighting efforts, as needed.

Aerial resources - including heavy air tankers and Type 1 helicopters - are the most effective tools in controlling the fire's spread and dealing with hot spots.

The fire area has grown to 199,237 acres, with 4,927 people assigned to the incident. Containment stood at 32 percent late Thursday.

Approximately 4,500 structures remain threatened in advance of the fire on both the east and west sides. Fire is expected to continue its eastward spread farther into the west side of Yosemite National Park, east of Aspen Valley. Several residents remain under mandatory evacuation in the Scotts Ridge area south of Highway 120. 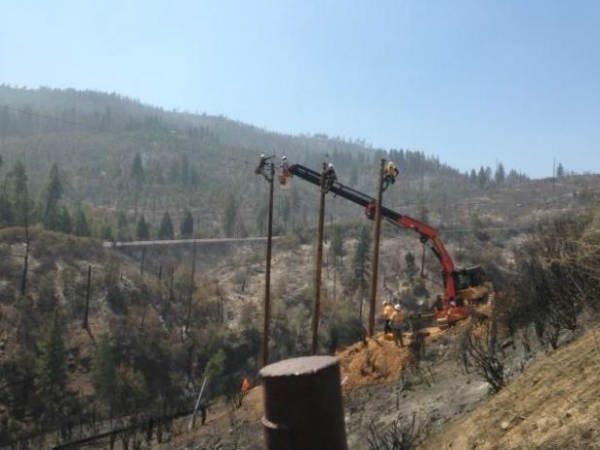 A crew from Pacific Gas and Electric repairs lines inside the Rim Fire burn area. (Photo courtesy USFS and PG&E)

Evacuation advisories in Tuolumne City, Soulsbyville, and Willow Springs were lifted today. The evacuation advisory remains in effect for Ponderosa Hills and areas east, along the south side of Highway 108 up to Pinecrest.

A Forest Closure is in effect for locations near, and in, advance of the fire. Several locations on the west side of Yosemite National Park have had closures implemented as a result of the fire's spread.

Due to inaccessible steep terrain and extreme fire behavior suppression efforts on active portions of the fire are being significantly challenged. Heavy reliance on aviation resources has been critical in an effort to slow the fire's progress to allow suppression resources to establish indirect control lines in areas where accessibility and safety can be achieved. The availability of heavy aircraft is pertinent to the success of suppression efforts.

Continued warmer and drier weather is forecasted for the next several days, which will elecate control concerns and slow burnout progress. Remotely piloted aircraft is providing realtime visual and infrared intelligence on the fire. Continued unified command with CAL FIRE.

Fire Update
The advisory evacuation notice for Tuolumne City, Soulsbyville and Willow Springs has been lifted. Firefighters began burning operations south of Hetch Hetchy and along Old Yosemite Road. Crews continue with line construction near Clavey Meadows near the 3N01 Road. Crews began removing fuels along the Tioga Road and Highway 120 near the Yosemite National Park entrance in preparation for the planned burnout. This work is to reduce the intensity of the burnout. The burnout has begun near Pilot Peak. Night crews will continue with burning operations as long as weather conditions allow, and will construct and improve firelines and provide structure defense.

Evacuations and Advisories
The Tuolumne County Sheriff’s Department has lifted the evacuation advisory for Tuolumne City, Soulsbyville and Willow Springs. The evacuation advisory remains in effect for Ponderosa Hills and areas east, along the south side of Highway 108 up to Pinecrest. An Evacuation Warning has been issued for all residences north of Bull Creek Road (Forest Road 2S02), Bondurant Mine Road, Texas Hill Road, and Wampum Hill. A Mandatory Evacuation has been issued for residences north of Old Yosemite Road (Forest Road 2S01). Highway 120 at the Yosemite National Park boundary west to Buck Meadows has been evacuated. Evacuation centers are at the Mother Lode Fairgrounds in Sonora and at the Greeley Hill Community Center.