Structure defense continues on the Highway 108 and Highway 120 corridors, and around Cherry Lake.

Fire crews continued to make progress on the Rim Fire Friday, as several burning operations, designed the remove fuel in the path of the approaching fire, were conducted. The "fighting fire with fire" operation reduces the fire's intensity.

As a result, containment of the fire has reached 35 percent as of late Friday. The fire has grown to 213,414 acres, or 333 square miles. There are 4,844 personnel working the incident, and 4,500 structures are threatened.

The two-week-old fire has cost $54 million to fight, and could takes weeks to fully contain.

Multiple burning operations took place today. Crews burned on Pilot Ridge, Pilot Peak and Crocker Ridge in the southern portion of the fire. They also burned south from Hetch Hetchy toward Harden Lake on the eastern flank, near Hells Mountain on the north end of the fire. 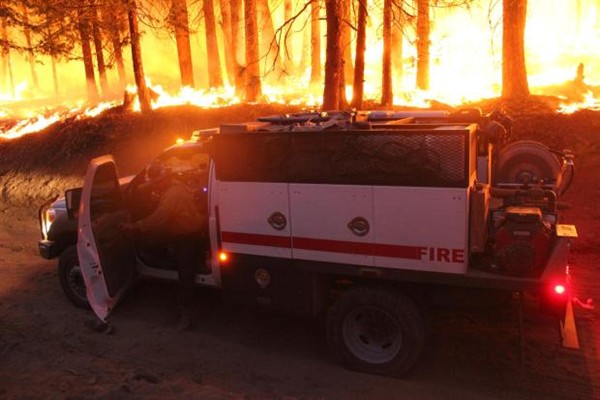 Airtankers and helicopters have been supporting the burning operations. Crews are also working to remove fuels next to firelines in front of burnouts that are expected to continue through the weekend. Friday night's operations included continuation of burning operations, as well as providing structure defense.

The Tuolumne County Sheriff’s Department on Thursday lifted the evacuation advisory for Tuolumne City, Soulsbyville and Willow Springs. The evacuation advisory remains in effect for Ponderosa Hills and areas east, along the south side of Highway 108 up to Pinecrest. An Evacuation Warning has been issued for all residences north of Bull Creek Road (Forest Road 2S02), Bondurant Mine Road, Texas Hill Road, and Wampum Hill. Residents living north of Old Yosemite Road (Forest Road 2S01) are under a Mandatory Evacuation. Highway 120 at the Yosemite National Park boundary west to Buck Meadows has been evacuated. Evacuation centers are at the Mother Lode Fairgrounds in Sonora and at the Greeley Hill Community Center