CalFire says crews are turning the corner against the "Rim Fire" burning in the Yosemite National Park area. Daniel Berlant with CalFire says the 192,000 acre fire is now 30 percent contained:

"We're optimistic, especially since a good percentage here of the work that's been done is around the surrounding communities. It really does give use a sense of relief, however, we have to keep our heads in the game. It doesn't take much for a little bit of wind to push this fire and it could be off to the races again." - Daniel Berlant, CalFire

Berlant says there are more than 4,800 firefighters battling the flames. He says they are working 24-hour-shifts. “It is a very physically demanding job for our crews to be out there, especially 24 hours a day." 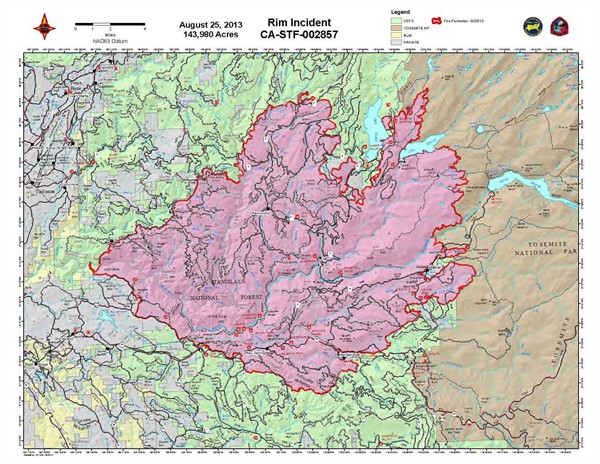 He says there are also California National Guard drones flying overhead that provide a live video feed of the fire's activity. The images allow commanders to better see where to deploy resources.

Berlant says the drones are particularly helpful given the difficult terrain:

"This fire is so large and so complex that having a new piece of technology that really does show real-time information of where the fire is allows our incident commanders to better decide where we need to deploy our resources, where we need to start making movement as the fire progresses." - Berlant

Berlant says warm, dry weather expected over the next few days could help the fire to spread more quickly again.  He says it's also important to remember that fire season is far from over.

“Even once we turn the corner on this fire – have this fire contained - and start releasing crews, we’re not over yet.  Fire season still has several more months and especially as we go into the holiday weekend, we could continue to see an increase in our fire activity the next couple of months.” 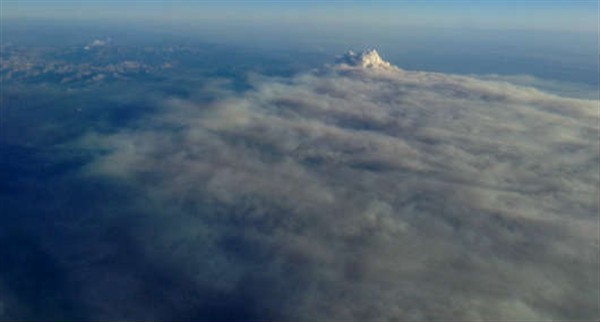 The Rim Fire as seen from a commercial airliner flying at about 30,000 Wedneday evening. This view is looking south. The smoke plume is blanketing the area in the foreground, with the billowing cloud showing part of the fire's weather system. Yosemite National Park is on the left side of the photo. (Al Gibes / Capital Public Radio)