The unmanned Predator drones are being used to send real-time images and information to fire officials. The aircraft will help identify where fire activity is located, how it is moving, including locating and identifying spot fires.

The technology will improve the ability to protect life property and natural resources, fire officials say.

As of Monday evening, the fire had claimed 111 structures and has cost $39.2 million, with 4,537 personnel working the incident. 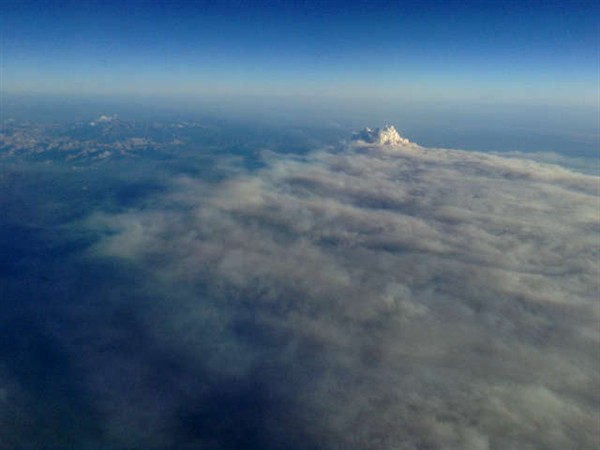 The Rim Fire as seen Wednesday evening from a commercial airliiner flying at about 30,000 feet. The view is looking south from directly above the smoke plume. The fire's weather system is seen in the distance, with Yosemite National Park to the left edge of the photo. (Al Gibes / Capital Public Radio)

Fire Update (From the U.S. Forest Service)
Firefighters used aerial ignitions today to burnout Pilot Ridge on the southern portion of the fire. The burnout planned from Hetch Hetchy Reservoir south to Tioga Road in Yosemite National Park did not occur. Conditions were not conducive to lighting and containing the fire. Firefighters continue to provide structure defense and improve firelines.

The Tuolumne County Sherriff’s Office has lifted the evacuation order and PG&E has restored power to Graham Ranch Road, allowing residents only to return home. Tonight, crews will continue with burning operations as long as weather conditions allow, and will construct and improve firelines.

Ride along in the cockpit with the 146th Airlift Wing of the California Air National Guard as they make a fire retardant drop on the Rim Fire.

Fire officials say that 111 structures have been burned by the Rim Fire, up from 23 yesterday. The loss of a family camp accountis for much of the large increase in property loss.

The recent increase in structures destroyed is due to structures lost at Tuolumne Berkeley Family Camp on Hardin Flat Road, which include 3 commercial properties and 85 tent cabins and outbuildings. Officials haven't specified details of other structure losses.

Approximately 4,500 structures remain threatened in advance of the fire on both the east and west. Several residents remain under mandatory evacuation in the Scotts Ridge area south of highway 120. Evacuation advisories issued to areas from Long Barn north to Pinecrest.

A portion of Tioga Road in Yosemite National Park is closed, starting today, because of the fire. Firefighters are clearing brush in the area to slow the fire’s spread. The National Park says the normally busy route is likely to be closed through the Labor Day Weekend.

The Road leads to the park’s eastern entrance.

The plume of smoke from the Rim Fire has triggered emergency warnings along parts of the eastern Sierra near Carson City, Nevada – more than 100 miles away.
School children were kept inside Tuesday for the second time in a week, people went to hospitals complaining of eye and throat irritation and officials urged people for the first time to avoid all physical activity outdoors.

The smoke from the Rim Fire burning on the western flank of Yosemite National Park continues to affect the air quality in the Tahoe Basin and much of northern Nevada. On Tuesday the Air Quality Index in Gardnerville was at 176, putting it in the “unhealthy” range.

The Nevada Department of Conservation and Natural Resources runs the monitoring stations in Gardnerville and Carson City. The department’s JoAnn Kittrell (KITT rell) says children, the elderly and people with health problems are most at risk because of the diminished air quality.

The air quality index briefly surpassed the rare "hazardous" level east of Lake Tahoe before improving Tuesday afternoon. Officials say "very unhealthy" and "unhealthy" conditions should continue through the week, advising residents to stay indoors with windows closed and air conditioning on. Outdoor activity should be reduced, and people are advised to stay hydrated. 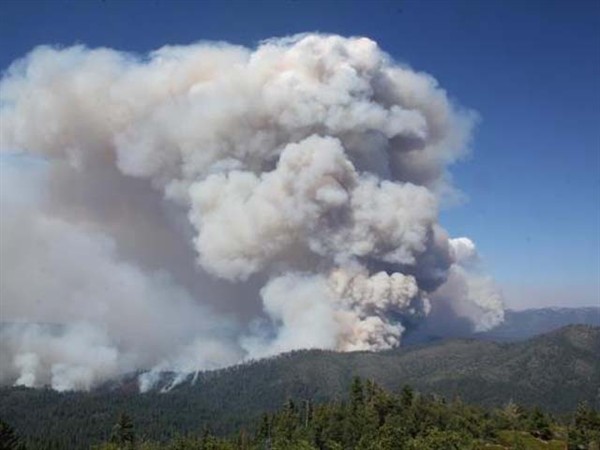 Smoke from the Rim Fire as seen from the Pilot Peak area. (USFS-Mike McMillan)

Firefighters made progress on spot fires in the Reynolds Creek drainage and burning operations south of Duckwall Mountain to Skidmore. Crews also were preparing for additional burning operations on the north side of the Tuolumne River.

A fire line has been secured line from Pilot Ridge west towards the Yosemite boundary along Old Yosemite Highway. Aircraft were used to support operations throughout the day.