The Rim Fire has now burnt nearly 64,000 acres, with containment slipping to 1 percent Thursday evening. Additional fire crews and resources have been assigned to the incident, with 1,849 people now fighting the fire on the ground and from the air.

Command of the incident has been moved into unified command under Cal Fire. The fire is burning in the Stanislaus National Fores on the Groveland Ranger District. It continues to move west, toward the community of Pine Mountain Lake and is approaching Camp Mather on the east end of the blaze.

Smoke from the Rim Fire

Evacuations
An evacuation order has been ordered for the area north of Ferretti Road to Elderberry Road. An evacuation advisory has been issued for the community of Pine Mountain Lake. Communities along Ferretti Road from Highway 120 to Pine Mountain Road and Highway 120 at the Yosemite National Park boundary west to Smith station have been evacuated. Evacuation center is located at the Mother Lode Fairgrounds in Sonora. 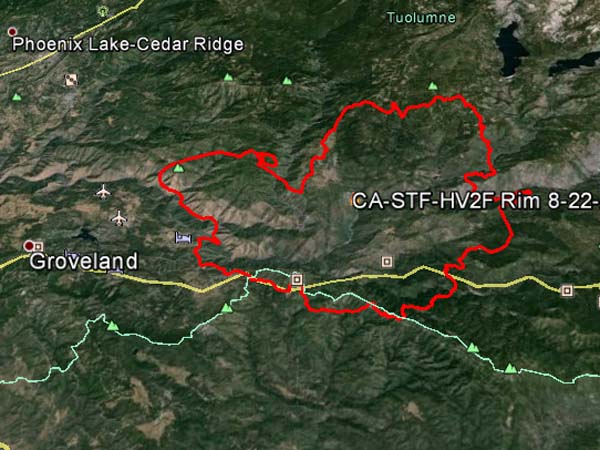 California Governor Jerry Brown has declared a state of emergency for Tuolomne County because of the out-of-control Rim Fire.  The declaration frees up federal funds and firefighting resources and helps Tuolumne County and other local agencies seek federal
disaster relief.

The Rim fire has tripled in size since yesterday morning. The US Forest Service says nearly 1400 firefighters are on the ground south and west of the fire to protect the community of Pine Mountain Lake.  DC-10’s and helicopters are the only weapons they have on the front of the fire.

“The north area of the fire is very steep and inaccessible," says Veronica Garcia with the Forest Service. "It’s very dangerous for our firefighters to get to that area by foot.  So, we have not been able to cut line for safety reasons, however we are depending heavily on aircraft which has dropped retardant and water.”

The fire is burning between Highways 120 and 108 near Yosemite National Park.  It has destroyed two homes and nine outbuildings.

Overnight, the Rim Fire exploded.  It's now burned nearly 54,000 acres. That's a dramatic increase from about 16,000 acres Wednesday morning.  The fire was 2 percent contained as of this morning.

Because it’s spreading so quickly, the National Forest Service and Cal Fire have teamed up  on a "joint command" to fight it, and hundreds more fire-fighters have been brought in.  There are now more than 1,400 firefighters battling the fire. 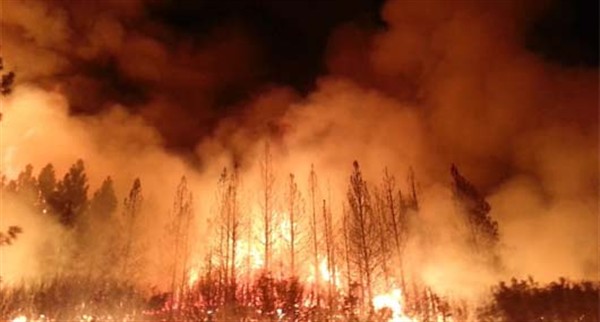 CalFire’s Daniel Berlant says the weather is really what’s made this fire – and others burning throughout the state – so tough to fight. “Well, the past couple of days we’ve seen very strong winds caused by the thunderstorms systems that have moved over much of Northern California and we’ve got about a dozen major wildfires burning in California.  The rim fire, though, has been able to grow so quickly with those strong winds.”

More than 2,500 structures are still threatened.  Two homes and seven outbuildings have already been lost.  Many members of the community to the west of the fire along Ferretti Road, north of Highway 120 have evacuated.

The fire camp itself was actually threatened at one point Wednesday as well.  Crews are using C-130 air tankers to drop retardant on  the fire, but Berlant says the terrain is making the fire tough to fight:“Most of this fire’s in a river canyon that’s very inaccessible, very difficult to contain.  That makes attacking this fire very difficult on the ground.”

The fire is about 10 miles from the northwestern boundary of Yosemite. Kari Cobb with the park says even though Highway 120 is closed – which is the main entrance that visitors would take if  coming from Sacramento - the park is still open.  She says taking Highway 140 through Merced is a good alternative route.

The Rim Fire is centered in the Stanislaus National Forest which is in the second year of a drought.  The dry vegetation makes for the perfect fuel and the steep terrain makes it impossible for fire crews to reach remote fire lines.

Fire officials say two residences and seven outbuildings were lost along Packard Canyon Road on the eastward push of the fire. Almost 900 personnel are working the fire.

Incident Commander Dave Cooper says the unpredictable weather is  also playing a part. "It's a Red Flag Day due to potential for lightning and with lightning and thunderstorms you get very erratic winds," say Cooper.

Strike teams from around the state are being called including about 40 Modesto firefighters. Modesto Deputy Fire Chief Sean Slamon says their job is protecting fire crews and buildings.

"Often times they are called upon to lay 4, 5, or 6,000 feet of hose line up and down some of the mountain terrain," Slamon says.

Cooper says there are so many fires burning in California and the western states that there is a shortage of firefighters, engines, and planes needed to suppress this blaze.

Fire officials report the fire is 5 percent contained as of late Tuesday, with more than 700 personnel working the incident.

The communities along Ferretti Road are being evacuated. The road is also closed at Highway 120. Evacuation centers have been opened at Sonora Fairgrounds and Greely Hill Community Center. The evacuation center at Tiago High School has been closed.

Dry lightning has sparked about 150 new fires over the past couple of days, though most have been quickly contained. 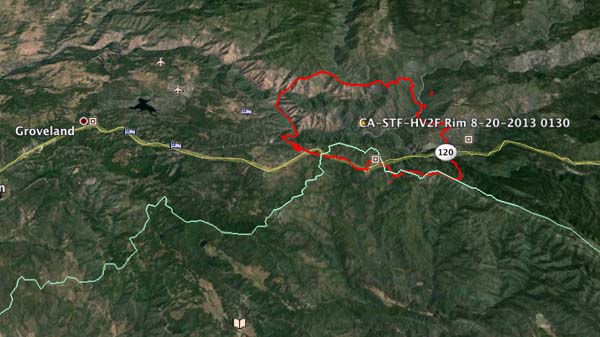 The north end of the fire has crossed the Clavey River and is burning in remote and steep terrain. The north end is not threatening any structures at this time.

Due to inaccessible, steep terrain and active fire behavior a combination of direct and indirect attack will be used on this incident. The fire burned actively with a southward spread of the fire over Highway 120.

Direct line suppression efforts are impeded by difficult access and steep inaccessible terrain. A combination of direct and indirect attack will be used on this incident. Active fire behavior today raises safety concerns for crews adjacent to the fire’s edge. Smoke exposure within the deep drainage of the Clavey River will be an issue for fire crews as well.

There is a red flag warning for lightning today through Wednesday.