Hobo Johnson: Born From A Corolla Into A Life Of Music 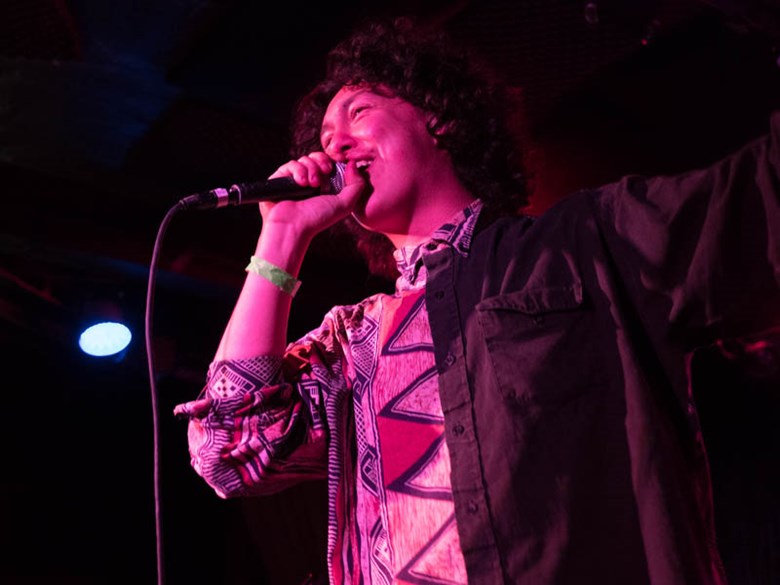 It’s been a hot year for Hobo Johnson, and we’re not just talking about the heat.

The Sacramento-based rapper – real name Frank Lopes — has been in high demand since he released a series of videos titled “Hobo Johnson – Live From Oak Park.”

Now Lopes, 22, can add four SAMMIES to his list of accomplishments and he’ll be performing at Concerts in the Park June 30 with his band, the Lovemakers.

We talk with Lopes about his music, how he developed his unique delivery, which he refers to as "sadboi hip-hop" and where he draws his inspiration.

In recent years, he has been profiled by the Sacramento Bee's Chris Macias and Submerge Magazine's Josh Fernandez. Former Sacramento News & Review reporter Janelle Bitker also sampled one of his tracks during a Sound Advice segment on Insight.

He won SAMMIES for the following categories:

Life before his rebirth into music

He attended John F. Kennedy High school. Without many friends and a self-proclaimed lack of social skills, he turned to video games to pass the time, which he says he found “very unuseful in life.”

This realization prompted him to sell his consoles and games to purchase music equipment. Here in his mid-teens was when he decided to make music, but the music of Hobo Johnson today was not an overnight process for him. It would be a few more years until he becomes the articulate, composed — yet carefree — young adult he is today.

He described his junior year in high school when he moved back to Loomis as a troubled year.

“I got into a group of friends and we would drink a lot ... Just got in with the wrong crowd. Drank too much all the time,” Lopes says. “Would go to school drunk or whatever — it was pretty bad. And then kept going and getting worse and worse and worse."

All the while, he was on Soundcloud making music that received little-to-no attention without much positive feedback.

After accumulating several DUIs, Lopes spent time in juvenile hall. It proved serendipitous for him because representatives from Auburn Hip Hop Congress came to talk to people serving time in juvie. He says he found the meeting inspiring enough to pursue a full-time career in music.

When Lopes left juvenile hall he returned to his father’s house, which was an experience that led him to feel like he had an unstable life. He says he became accustomed to the stability of juvie and being able to stay in a cell and be quiet all day.

The Legend of Hobo Johnson

Lopes started by going to open mics and performing all day in the street. Soon his music started resonating with people, much to his satisfaction, and the positive feedback gave him the confidence to realize that his dreams could come true.

One of the first songs he saw success with was with “Dear Labels,” a song about starving for career success. He was studying music composition at Sacramento City College at the time.

"I could feel that these were good. I could feel that like people are going to like these,” Lopes says. “Finally, after four years of no one ever liking it, I was like, 'Yo, I think this is my time. I could feel it in my soul. I was ready.' So I dropped out of college and quit my job that day."

He stopped working at a pizza place, dropped out of college and now makes his living selling albums.

His fear now is going back to a time when his music was not as appreciated as it is today.

“It's sad when you release a song and no one likes it,” Lopes says. “I'm afraid of it going back to that. I think that's what keeps me going: this fear.”

Lopes and members of his Lovemakers crew became one of the first artists to play in a series of out-of-studio recording sessions titled On Location. He joined us to film three music videos.

“A girl I loved moved away to a different part of the world,” Lopes says. “Life gives you more experience, more thoughts, and that will always help with music.”

He also talked about the car where he [Hobo Johnson] was “born,” which was a 1994 Corolla he would spend much of his days in. He recorded his first album as Hobo (not yet available online) in the car.

He said the origin of his name came on a whim, “out of a bag in my brain.”

“Hobo, Hobo Jones — no; someone else is Hobo Jones. Hobo Johnson,” Lopes says. “And I thought about it and I was like 'Yep, that's the one.' It was pretty instant, I think. I didn’t second-guess it.”

Sex in the City

You can see the progression of the night with each video, with “Sex in the City” being the final video recorded.

This has undoubtedly been the year of the Hobo. With co-band leader, Derek Lynch, the band is looking to release a new album and set of music videos. He refers to all of his band mates, saying he wouldn’t be where he is without them, and eagerly looks onward to continued success.

“Soon enough, once we get all this stuff done, my soul will be clear,” Lopes says.