The latest U.S. Drought Monitor report shows that conditions worsened in the Sierra as California is in the midst of a fourth year of drought.

“In northeastern California, exceptional drought (D4) was expanded across the northern Sierras this week, while in northern Modoc County, a one-category improvement (from D4 to D3) was rendered to the depiction to more accurately reflect local conditions,” according to the summary.

For the past two weeks, “extreme to exceptional” drought covered two-thirds of California, according to the report. Drought conditions worsened in Nevada, where a "one category degradaton was made in northwestern Elko County."

It’s not just California and Nevada facing increased drought. The report said in Washington State, near-record low snowpack increased "moderate" drought in the northern Cascades and in northeastern Washington. And the governor of Oregon has declared a drought emergency in seven counties in that state. 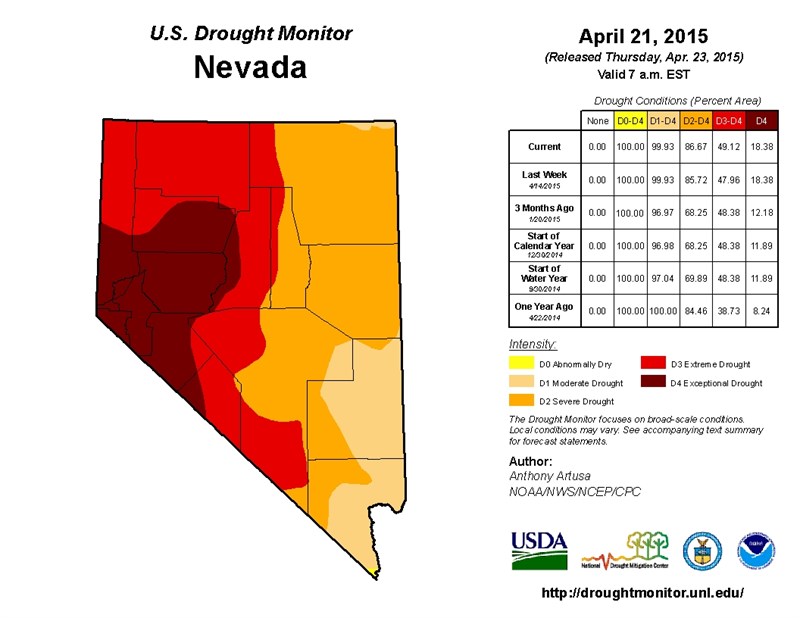 The Sierra Nevada snowpack is the lowest on record this year, according to forecasters. Normally, spring is when the snow melt adds to streamflows and fills reservoirs for use in irrigation.

“This year is going to be different,” said Cindy Matthews, Senior Service Hydrologist with the National Weather Service in Sacramento.  “With snowpack just 5 percent of normal, there is not going to be any large inflows to the reservoirs to help out with the summer demand for water.”

The latest forecast shows that temperatures will be above-normal for the spring and early summer months. As for precipitation in California, Matthews pointed out that “normal precipitation amounts for this time period are low and approach zero in July.”

The National Weather Service in Sacramento said earlier this month that “it would take 200 to 270 percent of average precipitation to make up for the past three years of drought in California.” It said California's water supply was in "dire circumstances."

The U.S. Drought Monitor is released each Thursday. It is produced by the National Drought Mitigation Center at the University of Nebraska-Lincoln, The U.S. Department of
Agriculture and the National Oceanic and Atmospheric Administration.