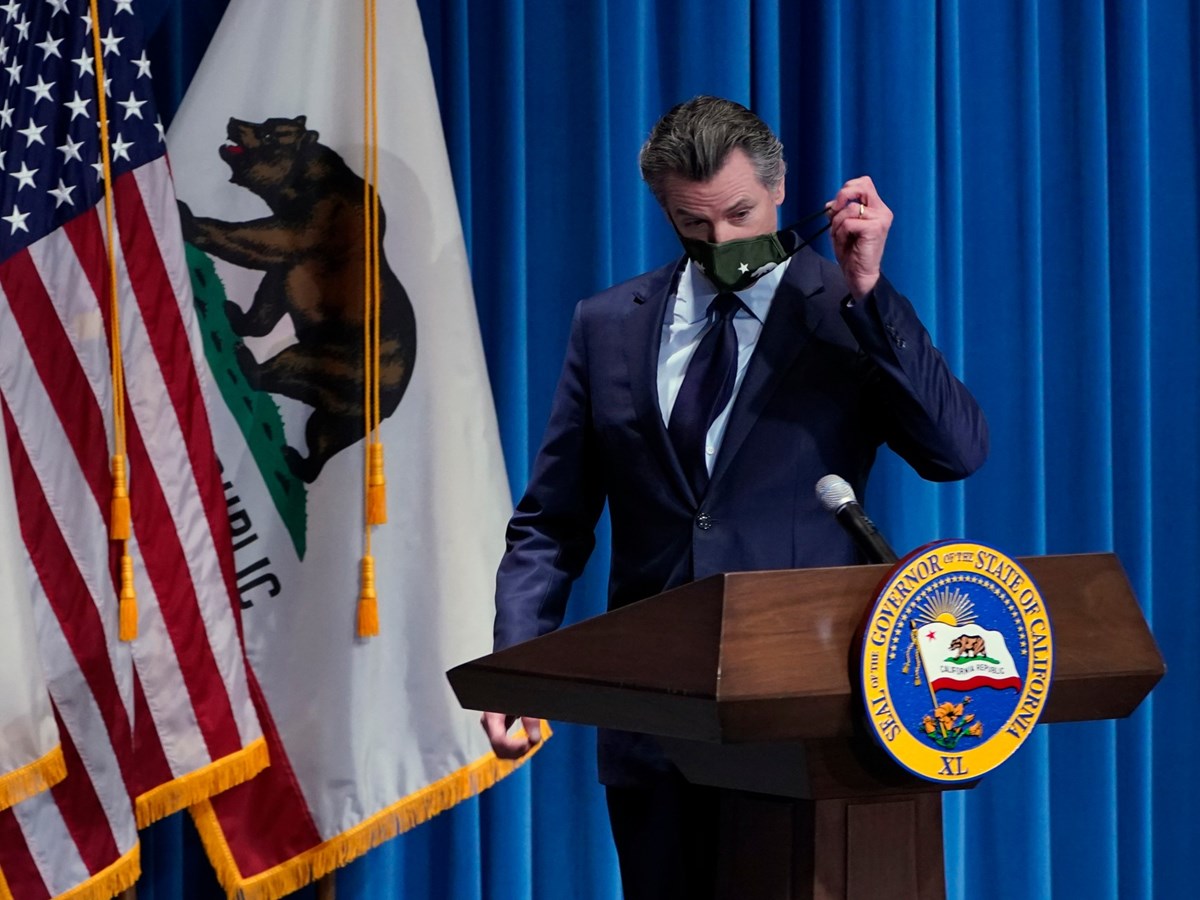 After spending the week touring the state and promoting a $100 billion pandemic recovery package — bolstered by a stunning $75.7 billion surplus and additional federal dollars — California Gov. Gavin Newsom presented the rest of his revised budget in Sacramento Friday.

The $267.8 billion spending plan is an updated version of Newsom’s January budget, which proposed $227 billion in spending. The revised budget incorporates the surplus and $27 billion in federal pandemic relief approved in March.

The governor said his proposed budget will “set this state up for not just a comeback, but a remarkable decade and arguably century ahead” as it recovers from the COVID-19 pandemic.

“This is an historic, transformational budget,” Newsom said. “This is not a budget that plays small ball.” He argued in favor of using a one-time surplus to implement programs the state’s Democratic leaders have often talked about but never implemented due to fiscal restraints.

Newsom is facing a likely recall election later this year. It's his first spending proposal since the Secretary of State confirmed there are enough valid signatures to put a recall before voters.

The Latest: The Effort To Recall Governor Gavin Newsom

It's a massive contrast to Newsom's budget presentation one year ago today, when the governor announced schools, homelessess and health care would see cuts as the state faced a $54 billion budget shortfall. But since then California has seen greater than expected tax revenues, especially from the state's highest earners, and additional federal funding that has left the state with a one-time surplus.

The budget is an outline of Newsom’s proposed spending priorities, but not a final product. Here's how the process works:

Here's what you need to know from Newsom's proposed budget (read the full budget summary here):

Newsom's latest proposal includes $12 billion to send $600 stimulus checks to Californians earning up to $75,000 a year who did not receive a check from the state’s first round of relief funds. People with dependents and undocumented residents will receive $500 extra. State officials estimate around two-thirds of Californians will receive payments.

State law requires taxpayers get a rebate when there’s a big surplus, which’ll likely be the case in 2021, though the numbers won’t be finalized for a couple years.

Lawmakers need to sign off on the plan, but Newsom has support from key leaders, and it will likely pass.

The state’s Employment Development Department has floundered under a massive backlog of unemployment claims which continues to grow even as Californians begin to return to work. Newsom proposed spending a total of $305 million to help clear the backlog, implement a system for direct deposit and improve access for foreign language speakers.

There is also $35 million to pilot basic income programs throughout the state, an idea popularized by Newsom adviser and former Stockton Mayor Micheal Tubbs, who initiated a program in the city during his term. The money would assist local governments looking to implement a program, not one run by the state.

Newsom proposed spending $9.3 billion on a range of housing programs, including homeowner and renter relief assistance. That total includes $3.5 billion to help create more affordable housing for low-income families, up from $3 billion in his January budget.

The updated budget also includes $5.2 billion in federal rental assistance funds for those facing hardships due to the pandemic. That total is nearly double the amount offered in Newsom’s January budget, due to the passage of the federal American Rescue Plan Act of 2021.

Over the next three years, Newsom said he wants to spend $12 billion to address one of California’s most vexing problems: Homelessness. He budgeted $6.8 billion on homelessness for the upcoming fiscal year, up substantially from the $2.1 billion he outlined in January. The governor’s plan would spend $3.5 billion to purchase and refurbish motels, hotels and other homeless housing units over the next two years through the Homekey initiative.

The governor’s revised budget also calls for spending $1 billion to help families experiencing homelessness or at risk of being homeless.

Additionally, Newsom’s budget would spend $150 million to help transition thousands of homeless Californians who remain in motels through Project Roomkey into permanent housing. Roomkey was established last spring to protect unhoused people as COVID-19 spread across the state.

Earlier this week Newsom announced $20 billion to “reimagine public schools,” including a $2.7 billion proposals to extend transitional kindergarten to every 4-year-old.

"We are creating a new grade in the state of California: TK," Newsom said. The state estimates this will eventually serve 250,000 children across the state.

Also included are proposals for $4 billion over five years to provide behavioral health treatment to all Californians under the age of 25, and $2 billion to create $500 college savings accounts for millions of children.

After last year’s record-setting fire season, which burned more than 4 million acres of California land, Newsom is proposing Cal Fire’s total budget to be about $2.4 billion, a $100 million increase from his January proposal. The proposal includes an additional $38.9 million for staffing more firefighters and California National Guard crews.

The proposal also includes sending hundreds of millions of dollars to the state Office of Emergency Services for wildfire response.

In total, the budget would spend about $1.2 billion — including a $536 million wildfire package signed earlier this year — to mitigate wildfires.

There’s a lot to break down with the governor’s proposed environment spending. Starting with water, Newsom’s May revision proposes $5.1 billion in the coming years to address water supply statewide — including drinking water, waste water and drought mitigation in communities. Newsom recently declared a drought emergency in much of the state.

But there’s also the agriculture industry, which represents a large portion of California’s exports and has been hit hard by decreased water supply and dry weather conditions. The budget proposes spending $794 million in upgrades in farming, improved drought resiliency, sustainable pest management and more.

The governor is also proposing $3.2 billion over the next three years to expand the state’s zero emission vehicle goals. That includes more zero-emission short-haul trucks, transit buses and school buses, as well as charging and fueling infrastructure to adjust to the increase of zero-emission vehicles on the road.

The biggest change in regards to criminal justice is that the state will eliminate debt owed for traffic fees and fines for low-income residents on tickets issued between 2015 and June 2021. That comes in the form of a one-time $300 million payment from the federal American Rescue Plan Act of 2021.

Otherwise, there are no other substantial changes in spending from Newsom’s original budget compared to this revision, specifically with funding for the California Department of Corrections and Rehabilitation. The governor is proposing $13.6 billion dollars in total funding for CDCR, up from $13.1 billion in January’s proposal.

The budget proposal still includes ending the state’s final contract with private prisons and closing Deuel Vocational Institution in Tracy by September 2021 and California Correctional Center in Susanville, by the end of June 2022.

Outside of CDCR, Newsom proposes spending about $13 million for investigating police use-of-force. There’s also $71.4 million proposed for the care of incarcerated people, which includes mental health and other treatment programs.

The governor’s budget includes no new money for county public health programs, which led the County Health Executives Association of California to tweet: “We are deeply dismayed.” The association said more funding is needed to rebuild public health infrastructure statewide, adding the lack of new funds “leaves lives vulnerable, particularly in Black and Brown communities who suffer from health disparities.”

Overall, the budget includes $207.7 billion for all health and human services programs, by far the largest for any category. That includes $54 billion in general fund money and $153 billion in other funds.

The plan would spend $50 million from the general fund to expand Medi-Cal coverage for the first time to undocumented seniors, ages 60 and over, beginning May 2022. Health advocates have been pushing for this in recent years, and have emphasized the need for the change in light of the heavy impact the pandemic has had on immigrant communities. Undocumented Californians up to age 26 are currently eligible for the program.

The May Revise also budgets $106 million in general fund dollars over three years to strengthen older adults’ recovery and resilience from isolation and health impacts caused by the pandemic.

Newsom is proposing spending $7 billion over three years to build a "middle-mile" broadband network to extend coverage throughout the state, and incentivize providers to increase service in rural and tribal areas.

The budget also has $4.2 billion for the state's embattled high speed rail project. The project has faced numerous delays and cost overruns, and Newsom scaled back the plan in 2019. Earlier this year California High-Speed Rail Authority CEO Brian Kelly said he hopes someone could buy a ticket from Merced to Bakersfield by the end of the decade.

There is also an ask for $3.1 billion for high-priority rail and active transportation projects and $2.4 billion to repair highways and bridges.