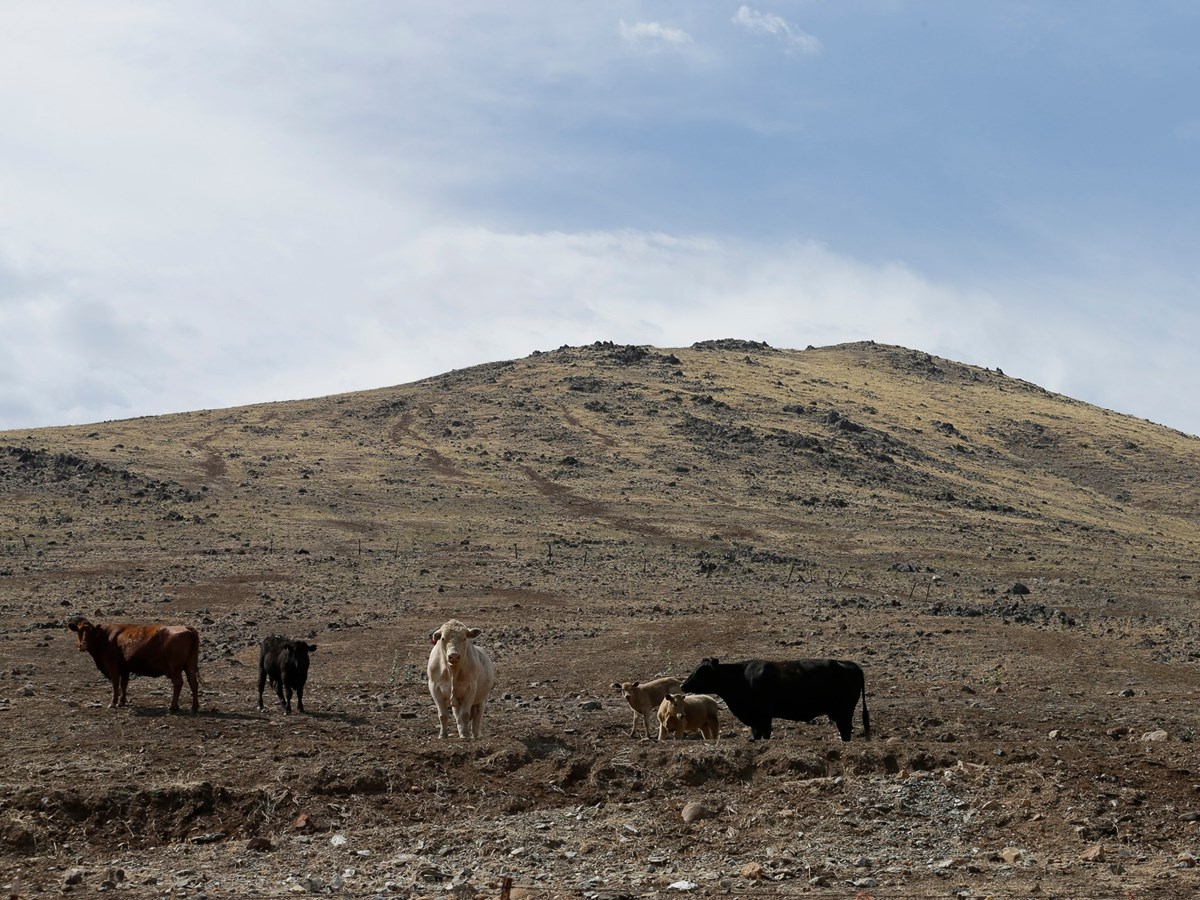 Cattle, graze on a barren hillside in Tulare County outside of Porterville on July 2, 2015. Today, Gov. Newsom declared a drought emergency in 39 counties amid mounting pressure from lawmakers and growers in the Central Valley.

California Gov. Gavin Newsom today declared a drought emergency in 39 additional counties, including most of the parched Central Valley and Klamath River area.

The declaration comes amid mounting pressure from lawmakers and growers in the Central Valley, who this year are receiving only 5% of their expected water allocations from the state. Growers say the sharp cutbacks in state and federal water supplies will mean they will suffer huge economic losses and be forced to fallow fields and sell off cattle.

A bipartisan group of Central Valley lawmakers wrote to Newsom in April pushing for a statewide emergency that would give the state more flexibility in granting water transfers. They also sought easing of some rules for reservoir releases, which would “allow for more water to go to communities throughout the state.”

The governor’s emergency drought order “sounds positive to us, particularly the flexibility for water transfers,” said Mike Wade, spokesman for the California Farm Water Coalition, which represents state growers. “We have water in some areas and we want to make it available in other areas. Those transfers have to be approved in time periods that work for growers on another end.”

Natural Resources Secretary Wade Crowfoot said the order will expedite transfers of water wherever possible among growers and agencies — which means one grower can sell water to another. But he told CalMatters that the state cannot increase reservoir releases to give growers more water at this point. In fact, the emergency declaration will allow state officials to modify water quality standards to allow more storage of water in reservoirs for the dry days ahead.

“That being said, we want to support growers however we can,” Crowfoot said.

The California Farm Bureau said today that it is grateful for the “short-term” relief for some growers that may come with the emergency order, but that what they really need is major investments in water supply projects.

“By widening the drought emergency, the governor has recognized the reality facing much of rural California: Our future is not guaranteed,” said Jamie Johansson, the bureau’s president.

The new order expands the drought emergency to a total of 41 counties that make up more than half of the state’s land. Declarations already were announced last month for Mendocino and Sonoma counties due to severe conditions in the Russian River watershed.

Extreme drought in nearly all of California

The news comes as drought spreads across California, with most of the state experiencing extreme drought conditions or worse.

Water levels in the state’s major reservoirs have dropped far below average, and there’s little hope of refilling them.

Rainfall in almost all of the state has dropped below half of average. The Sierra Nevada snowpack dropped to 8% of average by May 10, and the dry air and soil are drinking up potential runoff. Streamflow in Sierra Nevada watersheds rivals lows seen during the peak of the recent five year drought.

“None of that water is entering the rivers and streams and flowing into reservoirs,” said Daniel Swain, a climate researcher at the University of California, Los Angeles. “It’s been steadily getting worse and steadily approaching the peak magnitude of the last big one.”

All told, water supplies have fallen short of expected levels by 500,000 acre feet, according to the governor’s office. “Enough to supply up to one million households with water for a year.”

Crowfoot said the emergency order will allow the state to modify water quality requirements in rivers and the Bay-Delta in order to hold more water in reservoirs such as Lake Oroville, the largest reservoir the state operates.

No water quality requirements have been waived yet. The emergency declaration simply gives state officials the authority to change them, Crowfoot said. The goal is “so that we can hold more water within the reservoirs for later in the season, and next year, if it’s a dry year,” he said.

But environmental advocates are concerned that waiving water quality rules could harm fish and wildlife in streams.

“Everyone knows that (the existing standards) are too weak to protect fish and wildlife, particularly in really dry years,” said Doug Obegi, senior attorney with the Natural Resources Defense Council. “Weakening those standards, whether it’s salinity standards in the Delta or instream flow standards on the Feather River, are certainly bad for fish and wildlife, and bad for people as well.”

And what’s more, Obegi said, they could have been avoided had officials reduced water allocations earlier. Despite the reductions, he calculates that state and federal water projects are still on track to tap into reservoirs for millions of acre feet of water.

“The state doesn’t have a plan for drought,” Obegi said. “And to the extent they do have a plan, it’s simply to violate water quality standards and pray for rain, rather than curtailing unsustainable water diversions that are devastating native fish and wildlife, and communities in the Delta.”

The emergency powers also ease the way for the state to curtail water rights in drought-stricken river systems in order to protect threatened fish and prevent saltwater from backwashing from the San Francisco Bay into the Sacramento-San Joaquin Delta, which 29 million Californians rely on for at least some of their drinking water. The Delta is also a key source of water for irrigating the state’s multi-billion dollar agricultural industry.

“We need to make sure there’s enough water flowing into the Delta to repel salinity, in other words, to keep the salt water from intruding,” Crowfoot said.

The emergency powers will cut down on requirements for purchasing and contracting in the affected counties that Crowfoot said could otherwise slow critical services such as trucking fish stranded by low flows and warm water to the Pacific and providing assistance to communities whose groundwater wells have dried.

It will also waive some requirements under the California Environmental Quality Act, which requires an assessment of a project’s environmental effects, for constructing physical rock barriers in parts of the interior delta to protect against saltwater intrusion. Crowfoot said he expects the project to begin later this spring.

Among the groups that have been lobbying state officials is California’s commercial, recreational and tribal salmon industry, which says it is often at the end of the line when state water is doled out. California’s salmon provides $1.4 billion in economic value and supports 23,000 jobs throughout the state, particularly in the Bay-Delta region.

“Obviously, there’s not enough water to go around, and obviously drought hurts everybody,” said John McManus, president of the Golden State Salmon Association.

“Those of us in the salmon industry would like to see a little bit more compromise and a more balanced allocation of water,” he said. “The way it’s currently being allocated borders on a social justice inequity. Fishing families, especially on the coast, are being forced to shoulder more  of the pain from the drought than the big growers in the Central Valley.”

Julie Cart contributed to this story