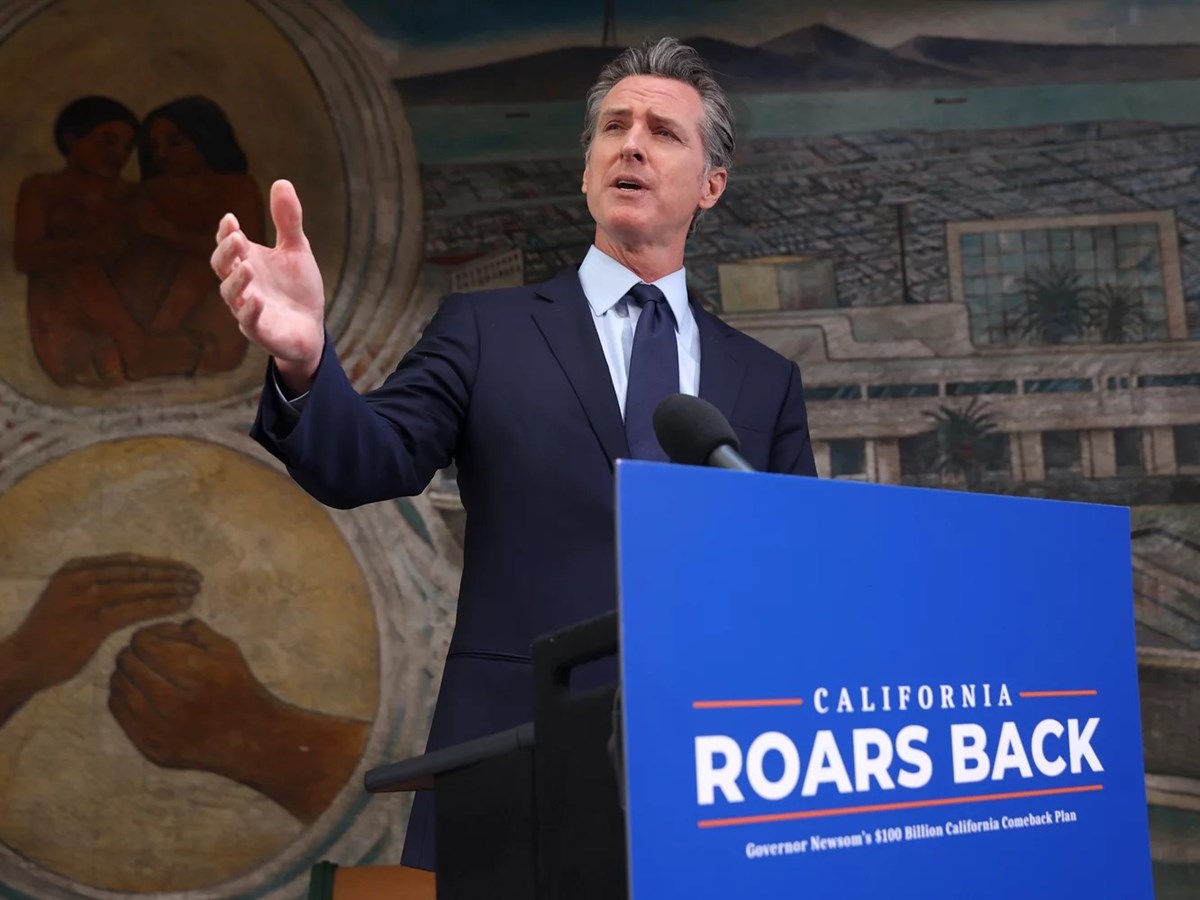 California Gov. Gavin Newsom speaks during a press conference in Oakland, Calif., on Monday where he announced a new round of $600 stimulus checks residents making up to $75,000 a year. Newsom also announced a projected $75.7 billion budget surplus.

A year after slashing spending to fill a record-breaking deficit spurred by the pandemic, California Gov. Gavin Newsom is eyeing a massive surplus and hopes to send out a second, larger round of stimulus checks to residents.

"It's a remarkable, remarkable turnaround," Newsom said in an interview with All Things Considered Monday.

California's progressive tax structure means the state budget suffered early in the pandemic but quickly rebounded, bolstered by capital gains taxes and high-income earners who've seen their wealth grow over the past year.

Newsom, who will likely face a recall election later this year, announced a plan to send billions of dollars back to taxpayers. If approved, the state would give $600 checks to workers who earn up to $75,000 annually, with $500 bonuses for tax filers with dependents and undocumented families.

Newsom said 80% of the state's workers and two-thirds of all residents would benefit from the plan.

State law requires that taxpayers get a rebate when a budget surplus hits a certain size, which has only happened once in California in more than 40 years. A spokesperson for the California Department of Finance said the numbers for this year's state budget won't be finalized until 2023.

Newsom said his stimulus proposal, which totals just under $12 billion in relief, goes "well above and beyond what is projected to be required" by the law. He claimed it is "the largest tax relief year-over-year in U.S. history as well, not just California history."

Several Republican lawmakers called Newsom's proposal the "recall refund," noting the governor announced the plan weeks after state officials confirmed the petition to recall him has enough valid signatures to go before voters.

Who is gonna tell @GavinNewsom that this is what Republicans have said for years?#RecallRebate https://t.co/FfawZ7YgJk

State Sen. Scott Wilk used the hashtag #RecallRebate in a tweet calling out the governor's plan.

Newsom has denied the timing of the stimulus plan is tied to his political future and painted the recall effort as one funded and pushed by Republicans.

"It is a Republican-backed recall period, full stop," he said.

"To the extent that people rightfully and understandably were stressed and anxious over the last year because of this pandemic-induced recession and all the struggle, I completely respect and understand why some may have filled out a petition. But at the end of the day, this is what it is, a Republican-backed recall."

Lawmakers need to sign off on the stimulus plan but leaders of the budget committee attended the announcement in support, signaling it will pass.