USGS Hydrologist Michelle Sneed stands next to the Delta Mendota Canal in the Central Valley pointing to an area where the concrete lining is cracked and buckled. 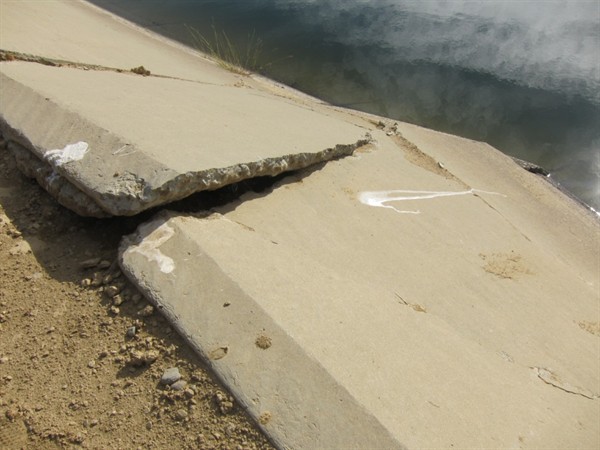 But according to her study, the center of the subsidence problem is about 15 miles to the north, near a town called El Nido.

“It’s so large, it’s 1200 square miles that were affected by subsidence over a two year period that we have measurements for," she says. "This area where we’re standing now is just on the edge of that bowl so the Delta Mendota Canal is being affected by this large bowl, but it’s relatively minor.” 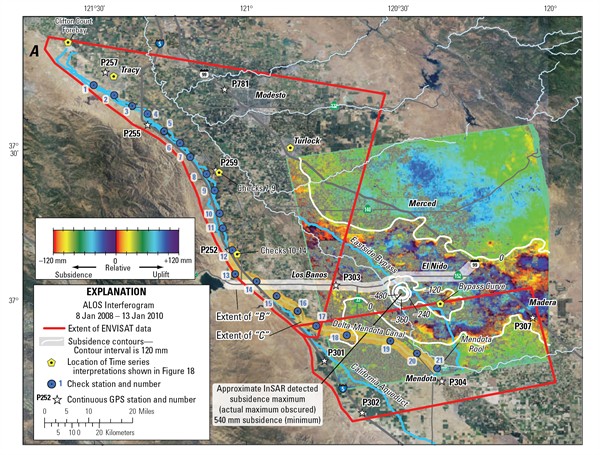 Sneed measures groundwater levels next to the canal using a metal field tape she drops down a well.

“We found in the study, that much of this area, not necessarily where we’re standing now, but closer to the center of the subsidence bowl, water levels have reached historic lows," she says. " That means as long as we’ve been measuring them they’ve never been lower than they have been recently.” 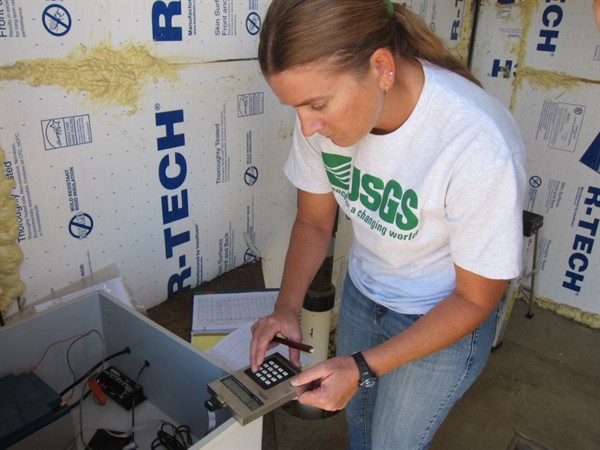 Drought and regulatory requirements that reduce the amount of surface water sent down the Delta Mendota canal and the California Aqueduct has some farmers turning to groundwater wells.

“That has the effect of providing less flexibility for farmers when there are droughts because these permanent crops will need water during droughts," said Sneed. "If you have row crops then perhaps fallowing the land during drought would be an option.”

She said it wasn’t just the sheer size of the subsidence area that surprised her about the study.

“We were also surprised by the high rate of subsidence about 11 inches a year, nearly a foot a year is among the fastest rates ever measured in the San Joaquin Valley," said Sneed.

"This is similar to the rates in the 50’s and 60’s before the California Aqueduct became an available water resource.” 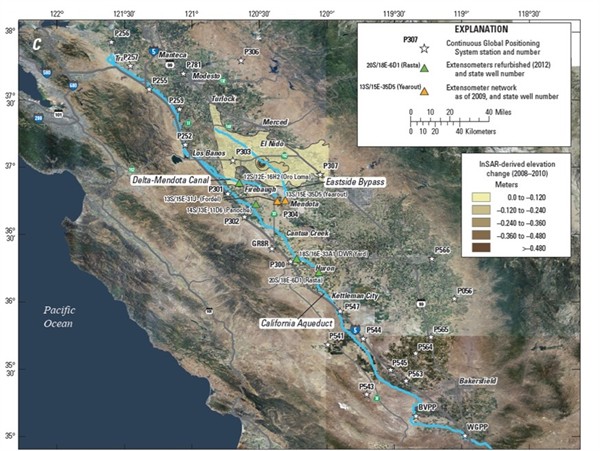 (Yellow part of map indicates where new subsidence is occuring. The darkest color near El Nido is where the subsidence rate is highest. USGS)

But finding a solution to the problem won’t be easy.

Chase Hurley, General Manager of the San Luis Canal Company in Dos Palos is trying to come up with a plan for his region.

The irrigation company’s dam that pushes water into the canal system is sinking six inches a year.

He takes me to farmland on the other side of the San Joaquin River that has no surface water supply.

“A lot of this land has been farmed since the 30’s or 40’s especially the stuff right along the river," says Hurley. "And they’ve historically managed it well so that they could use the shallow and deep aquifer.”

But he says some of the land was rangeland and is now being used for row crops and the acreage has increased for permanent crops.

“So it’s a lot of new demand on a system that historically didn’t have it, a groundwater system, so when it gets developed, they were putting in wells both shallow and deep,” says Hurley.

Hurley has been trying to organize local farmers to come up with a plan.

“We have guys out here that are spending $200,000 to 300,000 for a deep well and if the well only lasts 3 or 4 years because subsidence is just wrecking it , that’s a huge amount of money that he has to reinvest again,” says Hurley.

Subsidence already places a significant part of the Central Valley at greater risk for flooding.

Subsidence has damaged crops, stalled restoration projects, and can be a problem for anything built in its path.

Subsidence is spreading, and once it happens, it’s permanent.