A new report from NASA's Jet Propulsion Laboratory shows the San Joaquin Valley is sinking much faster than ever before.

Blame it on the drought. And groundwater pumping.

The latest NASA data show that the increased rate of subsidence - sinking land - is happening because of increased groundwater pumping due to a decrease in surface water deliveries.

Subsidence has been happening for decades in California. Overlying land surfaces sink as groundwater aquifers are tapped. But what is new, is the rate at which it's happening in the past year as California heads into a fifth year of drought.

"Because of increased pumping, groundwater levels are reaching record lows - up to 100 feet lower than previous records," says Cowin. "As extensive groundwater pumping continues, the land is sinking more rapidly and this puts nearby infrastructure at greater risk of costly damage."

The NASA report showed land near Corcoran in the Tulare basin sank 13 inches in just eight months in 2014.

The report also showed areas near the California Aqueduct (July 2013 to March 2015) sank 12.5 inches - with eight-inches of that happening during four months in 2014.

In the Sacramento Valley, an area near Arbuckle and north of Yolo County was sinking about half-an-inch per month, "faster than previous measurements."

"Subsidence impacts happen over a long  period and are typically handled by various agencies that own affected infrastructure," says Jeanine Jones, DWR Deputy Drought Manager and Interstate Resources Manager. "Local agenices in the area of the Mendota pool, for example, have been looking at needed repairs to be able to move water into their canal systems because of changes in the water surface elevations in that area." 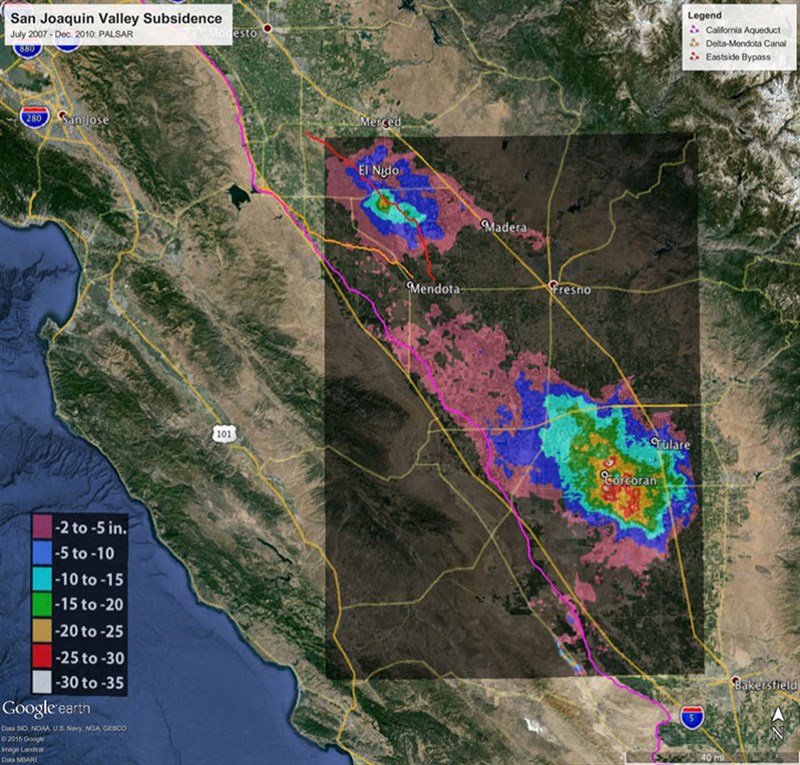 'Groundwater pumping is not a bad thing'

"Groundwater is a tremendous resource for Central California, we depend upon it, it serves as a savings account and it provides us the ability to regulate water supply across wet periods and dry periods," says Cowin. "We're not here to suggest groundwater pumping is a bad thing."

But Cowin says, in "this historic drought, we are pumping at record levels, more than we recharge over time, and negative effects like subsidence begin to occur."

Cowin says the DWR is launching a $10 million program to help counties with stressed groundwater basins to "develop or strengthen local ordinances and conservation plans." He says the funding comes from the statewide Water Bond passed last year.

"What this NASA report underscores for us is the need for more near-term measures to reduce the effects of over-pumping in the near term," says Cowin. "If our current drought continues or drought returns in the near future, we don't believe we can sustain this kind of pumping and the effects that are occurring."

He says a Merced County ordinance that took effect last April seeks to reduce over-pumping of groundwater by prohibiting "groundwater extraction at levels that go beyond historic patterns, including the construction of new wells."