If there is a villain in this devastating drought many fingers point at the California farmer. Central Valley farms are pumping out groundwater faster than it can be replenished.

In recent years, many farmers have switched to more efficient drip irrigation, replacing the old method of flood irrigation that was seen as wasteful.

But flood irrigation is better at restoring groundwater. One farmer wants to bring floodwaters back to the farm and he's using his own farm and his own funds to prove it's the way to go.

Don Cameron with Terranova Ranch stands on the back of a giant machine harvesting tomatoes, about 30 miles southwest of Fresno. Cameron grows 25 different crops on more than 5,000 acres here.  It’s fertile farmland even in this drought. 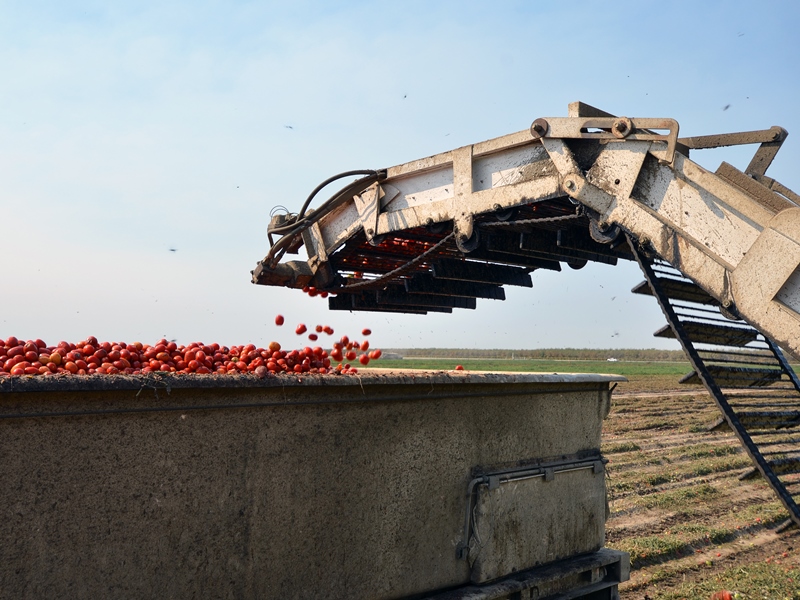 “This area right here is not in a water district, or an irrigation district, and so we’ve had to rely on well water for many, many years, for all the time we’ve farmed this ground,” says Cameron.

But over those years, the water level underground has dropped.

“We know for a fact on one of our wells we’ve seen two and a half foot of decline per year since 1986,” says Cameron.

Now that California is in its fourth year of drought, groundwater levels throughout the San Joaquin Valley are at record lows. 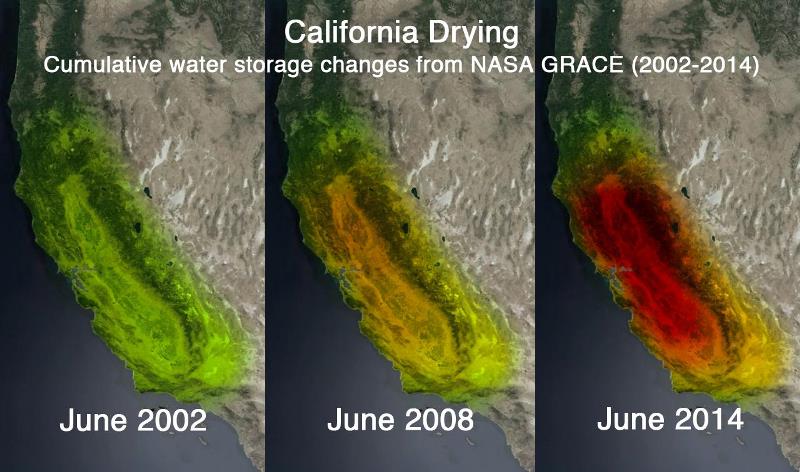 This trio of images depicts satellite observations of declining water storage in California as seen by NASA's Gravity Recovery and Climate Experiment satellites. Colors progressing from green to orange to red represent greater accumulated water loss between April 2002 and June 2014.

California's Sacramento and San Joaquin River basins, including the Central Valley, have suffered the greatest losses, in part due to increased groundwater pumping to support agricultural production. Between 2011 and 2014, the combined river basins have lost 4 trillion gallons (15 cubic kilometers, or 12 million acre-feet) of water each year, an amount far greater than California's 38 million residents use in cities and homes annually.  Courtesy / NASA/JPL-Caltech/University of California, Irvine

“If you look out here it looks like a desert, everything is brown. Everything is dusty and dirty,” he says.

Cameron stands next to a busy highway overlooking a dry river bed. It’s the North Fork of the Kings River. It only has water when the snow melts in a wet year and the winter floods come.
2012 was the last time that happened and Cameron took advantage of the extra water to flood his crops. 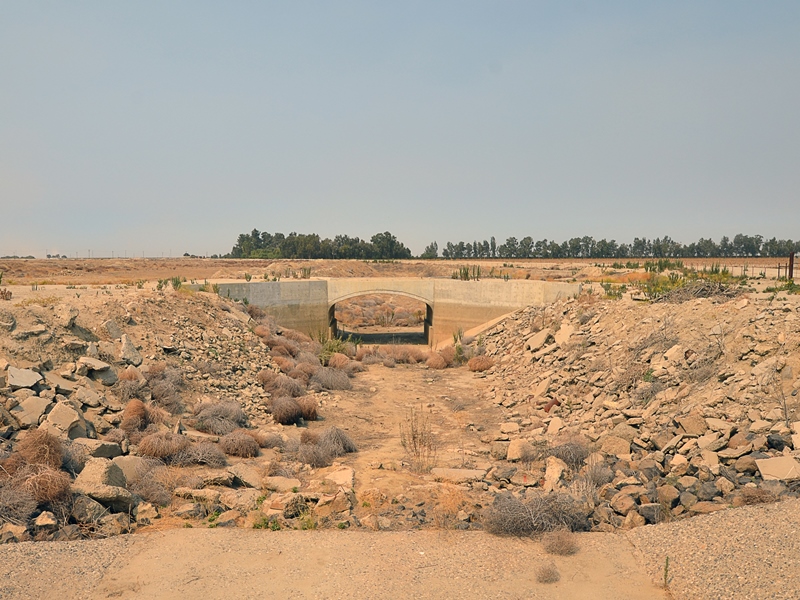 “At that time we put about 150 acres of wine grapes, we put water on those from January until May, for over five months about six inches to a foot and a half of water,” says Cameron.

Farmers typically don’t irrigate in the winter because there is usually enough rain water. There’s also the fear that too much water could damage roots of permanent crops.

“I think people thought we were crazy to be putting that much water on wine grapes for such a long period of time," he says.

But Cameron wasn’t wasting the water. His goal was to replenish the groundwater.

“We actually did measurements and we found that about 75 percent of the water we applied was moving down to the groundwater." 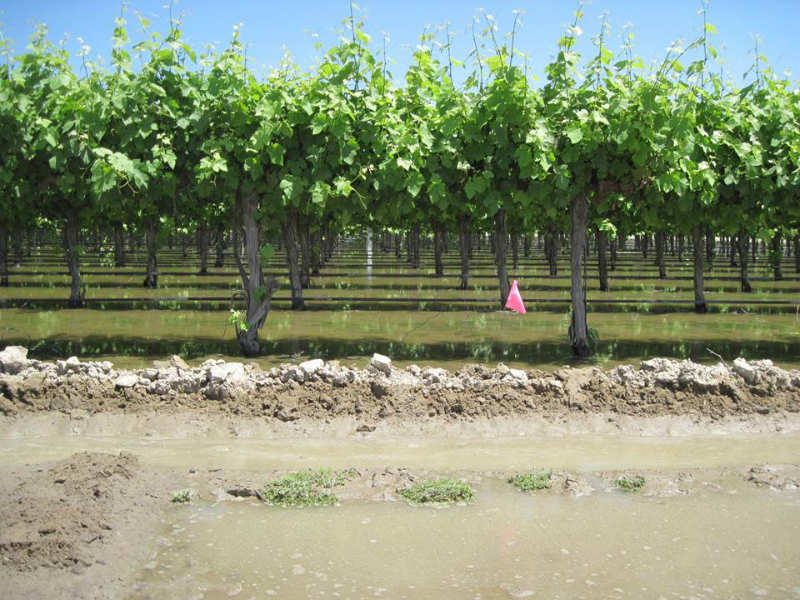 These grapes were deliberately flooded in the winter to recharge the groundwater.

Cameron’s grapes grow on sandy soils. If you flood those soils, water seeps quickly into the ground. Until now, restoring groundwater often required constructing big ponds on empty land to let water seep into the ground. Using agricultural land could open the door to millions of acres.

And Cameron says it didn’t ruin his crops.

"I think we actually saw a little bump in production after the water. It probably made the vines a little healthier to have the surface water put on them," says Cameron. "You can see we’ve got a great crop these are Barbera wine grapes." 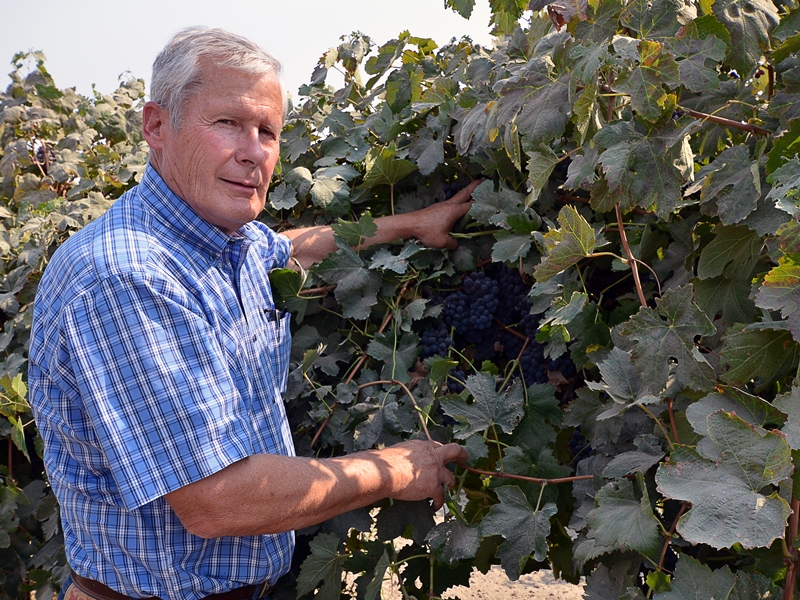 Cameron normally uses efficient drip irrigation. But he was able to use old flood irrigation piping and canals to move the flood water. He also flooded his pistachios and alfalfa. Cameron is convinced of its success so much he’s spending $2 million of his own money to expand the project. He and more than a dozen other nearby farmers plan to flood 16,000 acres.

“I think they’re going to be looking at their fields as not just a revenue source but as a way to increase groundwater in their region," says Cameron.
Restoring groundwater by flooding farmlands can’t be done everywhere. Not all soils are permeable and not all crops can tolerate extra water in the winter. But it shows enough promise to garner the attention of almond growers. The thirsty crop has been villainized in the drought. The Almond Board of California is funding a study with UC Davis to see if flooding orchards can work.

“Almonds are a very interesting test case because the almond acreage is huge and a lot of them are in areas that are...the soils are good for groundwater recharge,” says Ken Shackel, with the Department of Plant Sciences at UC Davis.

One drawback is that most almond growers no longer have the piping and canals once used to flood irrigate. But Don Cameron says every effort should be made to see if it’s possible to restore groundwater.

“This is something that can be done now, in a relatively short amount of time and the benefit is immense. You’re essentially putting money in the bank for a rainy day,” says Cameron.

Or, in this case, for a dry day. State law will soon require local water agencies or irrigation districts to have plans to manage groundwater sustainably. That may make deliberately flooding a crop to recharge groundwater not so crazy after all.