Interview: Saxophonist Mindi Abair In Her Own Words 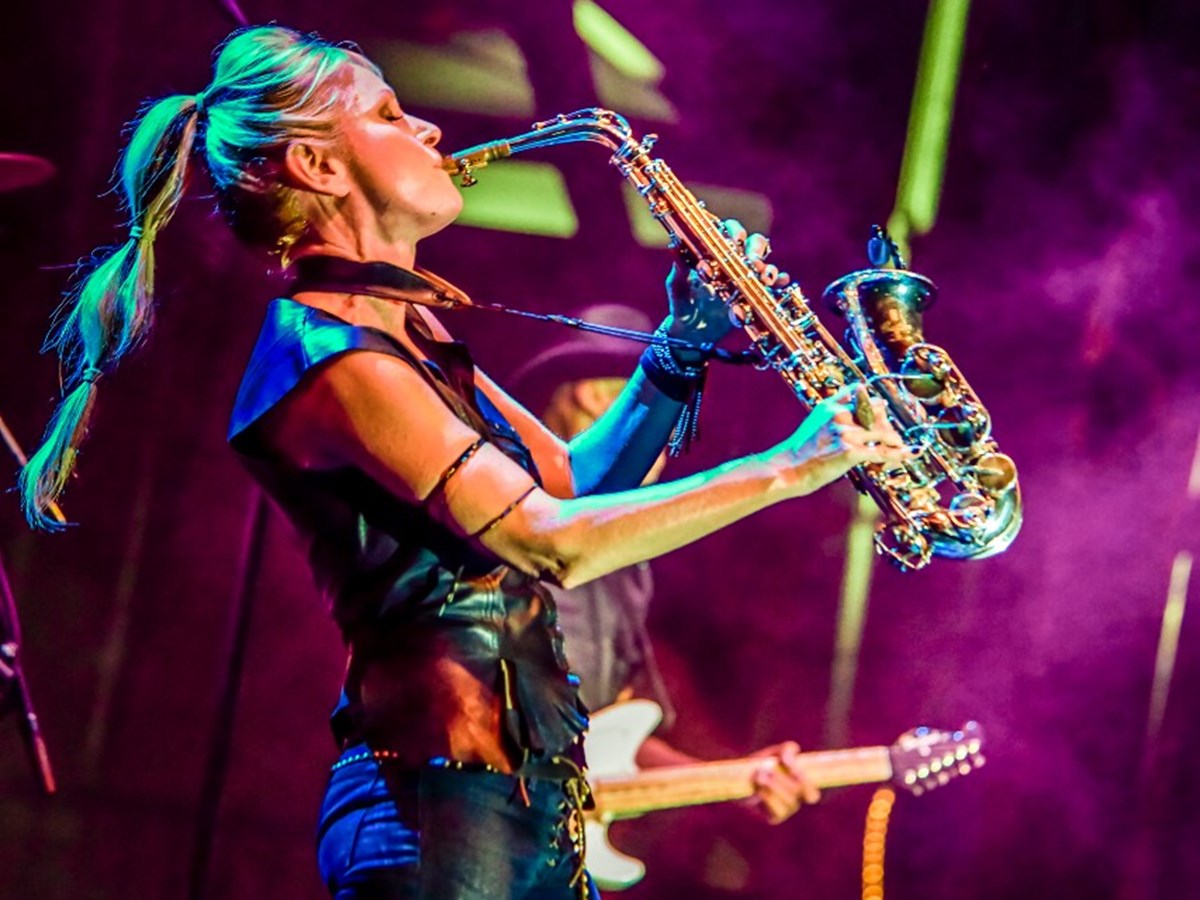 Since her recording debut in 1999, Mindi Abair has garnered 12 No. 1 radio hits on the smooth jazz and blues charts. This two-time Grammy nominee has worked with artists as diverse as Duran Duran, Lalah Hathaway, the Backstreet Boys and Aerosmith. Abair served 10 years as a governor and president of the Los Angeles chapter of the Recording Academy and was the featured saxophonist on American Idol.

CapRadio’s Jazz Music Director spoke with Abair on her background, getting started in the industry and more.

Mindi In Her Own Words

On growing up in Florida

I grew up with music all around me. I basically was born and they took me out of the hospital to a band truck. So, I grew up on the road with my dad's band. It was this high energy, blue eyed soul band. And I, as a super small kid, I would just watch my dad and these guys in the band.  My grandmother was an opera singer and there was just music everywhere. It was kind of a normal, you know, if your father's a firefighter, you think maybe I'll be a firefighter. It was just what's around and it just seemed fun. And I started playing in school band when we settled down. I was 8 years old. I started playing saxophone because I wanted to have as much fun as I saw my dad having. And I chose right. The saxophone is a super fun instrument and I've had a blast.

On attending the Berklee College of Music in Boston

The beauty of Berklee College of Music is that you can really dip your toe in to everything, and I loved that. Actually, the first school I went to was for a year at University of North Florida, and it was really traditionally jazz oriented. I learned so much. It was incredible. You know, I was like a rock girl. I had grown up listening to Tina Turner, Heart, Aerosmith and Springsteen. That's what I knew. And boy, I went into college and I was just like, wow, I want to buy every Miles Davis record and every John Coltrane and Cannonball Adderley.

Then I realized traditional jazz wasn't my calling. I wanted something more pop and more mainstream. And, you know, at Berklee, I could play everything. I would be singing on people's demos at three in the morning for a country song. And I would be playing fusion in another room for the next couple hours and I would be playing funk the next day. And it was so fun. And I think it allowed me to be me. And my saxophone teacher, Joe Viola there, he always, every week he was like, “Did you start your own band yet?” And he was just so cool about having me find myself. And, you know, I did start my own band. And it did turn into this kind of amalgamation of what was around me and what was moving me at the time, which was jazz and pop and rock and soul and blues. And so, my music turned into something that was true to what I was feeling and what I was hearing and thinking.

On performing on the Third Street Promenade in Santa Monica

You know, if you're going to choose your street life, choose it to be warm and sunny! I was raised in Florida and I was used to warmth. Then I went to Berklee College of Music in Boston and I was just shocked that the world could be that cold. I remember calling home and just saying, “Oh, oh, I didn't I didn't know it could be 40 below zero. You didn't tell me that, you know, what am I doing here?” So when I graduated, I moved to Los Angeles because I just thought, wow, it's kind of like New York, but warmer. I thought, I want to be warm. I want it to be sunny!

So, yeah, I literally played on the street on Third Street Promenade and just I paid my rent like that for a while until (pianist) Bobby Lyle came by one day and, you know, listened. I knew who Bobby was. He was standing there watching me play. And he came up and he was just such a gentleman and just said, “Hey, I'm making a record and going on the road. Would you want to record and go with me?” That band is so great. And I of course, I jumped at it. Of course. Yeah. Are you kidding me? The guys in his band really showed me the way of the world and took me under their wing. And they were just so incredible to me, showing me how to be a professional and work in the professional world. I was just out of school. So it was absolutely an incredible thing for me to play with them.

On the loss of Smooth Jazz radio formats in many markets

The world has changed exponentially since I started playing music. We've watched everything change and morph so much and there are so many opportunities now that weren't around. You  can turn on YouTube and listen to anything. You can get on Facebook and see people playing live. I did it every Tuesday from my porch during the pandemic. There are these things that exist now that allow us to reach so many more people than we could have by almost any means 10 or 20 years ago.

But yet, we lost so many smooth jazz stations around the country. And that broke my heart. It broke all of our hearts. But the thing that keeps me smiling and keeps me, you know, just really happy about all of this is that we didn't lose our audience. Our audience are people that absolutely love smooth jazz and contemporary jazz and us as musicians and us as performers. And they're still coming out to every show, you know, dancing, laughing, drinking, having fun, cheering us on. That has not changed a bit. So maybe the medium has changed in ways and how we do it. But boy, to get back out there this year and just see the same smiling faces that have been in our audience for so many years, it was absolutely incredible. And the same people who have listened to me for a million years on radio, tuned in to Facebook when they couldn't enjoy live music for the past 18 months. So, you know, there will always be a way.

Boy, I just had fun with “Imagine,” and I never thought I was, you know, making a record! I was in my friend's living room and we were just jamming and we were playing and we filmed it on an iPhone and put it on YouTube. And here, you know, it has three and a half million views, which is just crazy. I'm kind of old school. I think of hit records as platinum records or, you know, they were a hit on radio that was never that way with “Imagine.” But everyone would ask me, “What record can I get that on? Where can I get that?” And I would just kind of laugh and go, oh, my goodness. But it's such a beautiful song and it's always been a song that's inspired me. So we just put it on “The Best of Mindi Abair,” which just came out in April of this year.

On recording “Pretty Good For a Girl”

I have a lot to say about that! I mean, look, no one told me it was odd for a girl to play the saxophone. Until it was way too late. I just I fell in love with the saxophone the moment I started playing it. I really never thought about, you know, being a woman versus a man, playing, playing anything or doing anything. I was really raised by people that just said, “Hey, go do or be whatever you want to be. Just work hard at it and you'll be fine.” So I had to write this song because, look, I've been in incredible situations and I've seen incredible women take over the world on a daily basis.

But every once in a while after a show I play, I'll have someone come up to me and shake my hand and go, “Wow, you're pretty good for a girl.” I feel like it's kind of my place in the world to change a few misconceptions about maybe what a girl sounds like. So I wrote that song kind of tongue in cheek, and my guitarist Randy Jacobs wrote it along with me. And he and the guys in the band kind of made it this anthem. And it's turned out that people come to my shows now with “Pretty Good for a Girl” t-shirts and bracelets. And, you know, it's become this kind of girl power anthem of just me telling my story in a very tongue and cheek way and just playing and having fun. So, I love it. I love being a voice for women and strong women and capable women. And I love having that in the set every night. It's powerful!

On appearing on American Idol

I did two seasons as their featured saxophonist, and I just got to expand my mind and work in someone else's framework and add to someone else's vision. It was awesome! And of course, at the very end of the two seasons, Steven Tyler asked me to go on the road with Aerosmith. And, you know, you can't say no to Steven Tyler. So, of course, I took my summer vacation with Aerosmith and they were good enough to let me do my shows with my band as well. So what a crazy life to go from American Idol to touring with Aerosmith and my band at the same time!

On Working for the Grammys and “Music Cares”

I love trying to further children’s music education. The fact that the arts have been taken out of the schools is just, I think, one of the most destructive things we can do to our kids. The art of music and the language of music and what they learn from it is incredible from discipline to integrity and teamwork. So it's so important. What I learned after playing a night for “Grammys In the Schools” was that they just do so much more and they have these charitable outreaches that help kids. They have “Music Cares,” that helps musicians in need, that is the safety net for musicians who don't have insurance coverage. So, I became involved and, you know, I kind of delved in and became a governor on the board of governors. And I became the president of the Los Angeles Chapter of the Recording Academy and then became a trustee on a national level for the Recording Academy. And I just really worked to further these charitable outreaches to further the heart of the Grammys and music education and all of it. So, it's something really near and dear to my heart. I wish more people knew that the Grammys is much more than an awards ceremony and television show. I really have had a blast being a part of it!