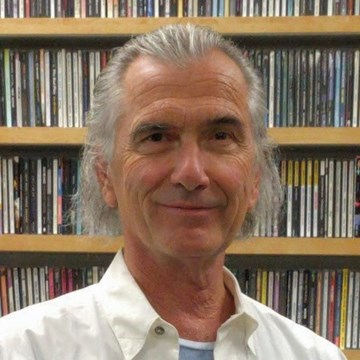 Gary Vercelli knew at an early age that jazz was his passion. "In high school, there was a 24-hour jazz station in Los Angeles, when commercial radio and jazz were not the oxymoron they are today," says Gary.  "I used to listen to that station and think, one day, I'd like to work there." Eventually, he did.  While attending college at the University of California at Santa Barbara, Gary launched his radio career. "After graduating, I worked at KCRW, an NPR affiliate in Santa Monica," he recalls. "While I was there, I coordinated 70 hours of weekly jazz programming and produced a pilot for NPR's Jazz Alive! series."

Gary then accepted a job at KBCA, the commercial jazz station of his high school days. During this time, he also served as the L.A. correspondent for Down Beat magazine and wrote liner notes for leading jazz record labels.

In 1980, Gary moved to Sacramento to serve as Jazz Music Director at KXPR, Capital Public Radio’s original, multi-format station.  For the next 11 years, in addition to supervising the station's jazz programming and concert activity, he produced and hosted Jazz International, a popular nightly jazz program. When CapRadio added its second station, KXJZ, with a jazz and news format in 1991, Gary easily assumed the role of music director. Before the station celebrated its fourth anniversary, Gary was named "Jazz Broadcaster of the Year" by the Gavin Report, a respected, national music industry chart. In 1993, the same publication proclaimed KXJZ "National Jazz Station of the Year."  More recently, Gary was recognized by Jazz Week with the prestigious Duke Dubois Humanitarian Award, acknowledging his lifetime of achievement and service to the community.

CapRadio’s program schedules have changed over the years, meeting the community’s growing demand for more NPR and NPR-style news programming.  The “Excellence in Jazz” sound established by Gary nearly four decades ago – a sound he continues to refine -- is now featured Sunday through Friday evenings, following a full day of classical music on KXPR, KXSR, and KXJS.  Gary continues to host EIJ three nights a week,  along with Acid Jazz, Saturdays on KXJZ.  He also programs CapRadio’s 24-hour digital music service, www.JazzStream.org.

When he's not on the air or previewing music for the station, Gary enjoys visiting the Bay Area, cooking, and teaching Iyengar yoga, which he has studied for more than 30 years. "I also have an interest in fine Italian wines, which is diametrically opposed to my yoga interest," he laments with a grin. "I guess I'm a classic example of east meets west."