Individuals dressed in nearly all black, associated with the antifa and block movements march near the California state Capitol building downtown Sacramento Jan. 20, 2021.

While we continue to monitor events in downtown Sacramento, we don't expect further updates to this story Wednesday.

Individuals dressed in nearly all black marching near California’s Capitol

Antifa-aligned demonstrators from two separate groups dressed in all black ended their day peacefully after marching through the streets of downtown Sacramento.

The demonstrators started at J. Neely and Fremont parks, then joined together at the state Capitol, where they hung an “Abolish ICE” banner on the six-foot chainlink fence set up around the building.

For weeks, the area in front of the Capitol’s west steps has been occupied every Saturday by pro-Trump demonstrators, far-right extremists and militia groups who touted baseless claims that President Joe Biden stole the November election. Outside of the staged rallies, antifa counter-protesters and far-right groups violently clashed.

Despite the preparation for violence, none occurred.

Wednesday's demonstrators left the Capitol without confrontation, stopped at the Federal Building to write “F--k ICE” in chalk on the ground, and then marched back through downtown to J. Neely and Fremont parks where they dispersed around 1:30 p.m. 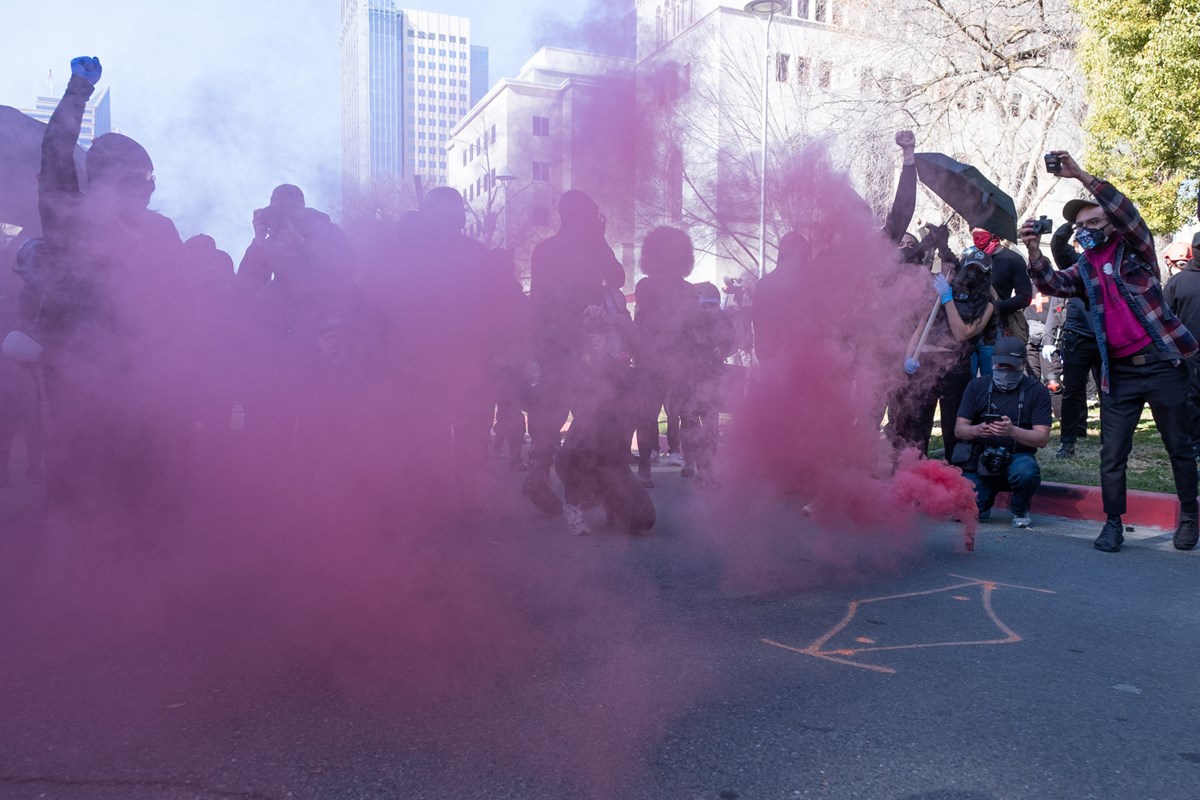 Individuals dressed in nearly all black, associated with the antifa and block movements march near the California state Capitol building with a flare in downtown Sacramento Jan. 20, 2021.
Andrew Nixon / CapRadio 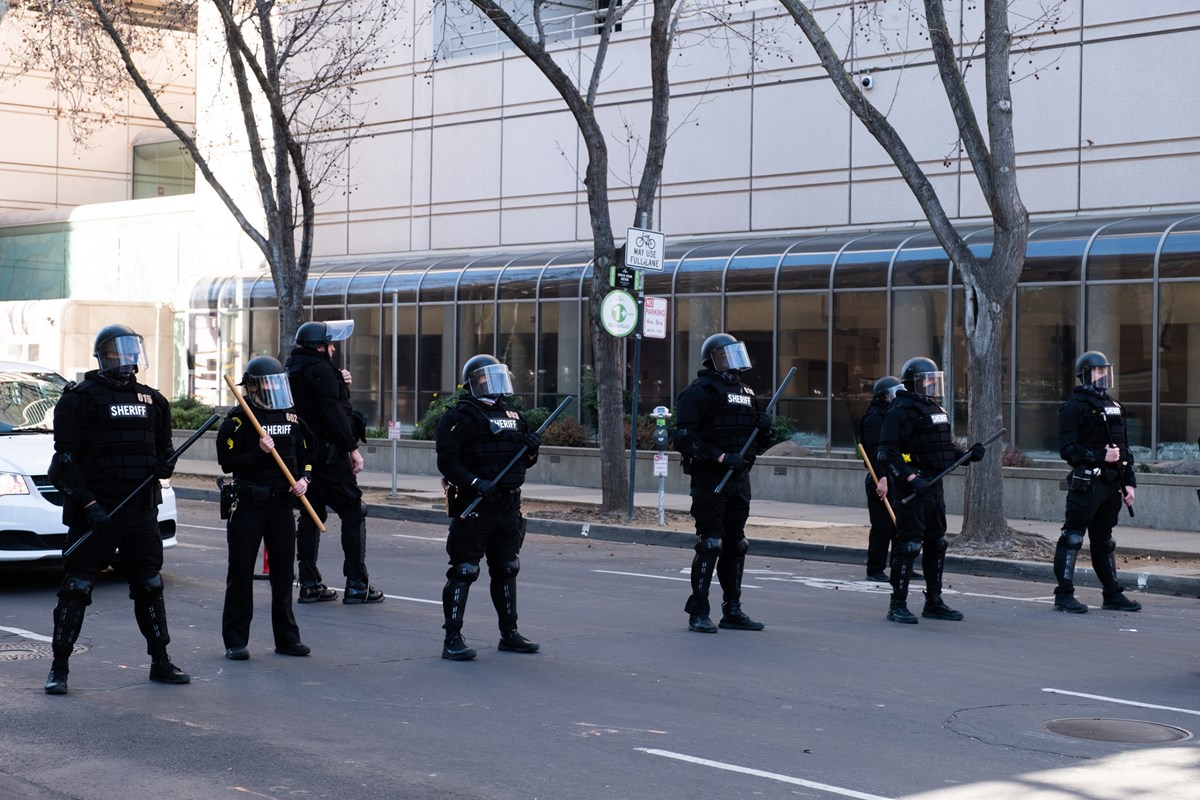 Sacramento police say demonstrators toppled over the fencing at the Sacramento County District Attorney’s Office, and that one person who confronted the demonstrators from their car was cited for illegal possession of pepper spray.

Police officials added that there will be heavy law enforcement presence downtown throughout the night.

Group of ~40 protesters heading out from J Neely Park heading east on F.

“No prisons, no walls—no USA at all”

“All cops are bastards”

CapRadio reporters at J. Neely Johnson Park downtown say nearly 40 people wearing black clothing have showed up in the past hour, and KQED reporters say a similar number was at Fremont Park in Midtown.

The individuals, likely associated with antifa and other block groups, have shown up on recent Saturdays since Election Day to confront Proud Boys and other pro-Trump militia members.

National Guard troops, in addition to state and local law enforcement, are blanketing downtown and also shadowing the marchers.

As President Joe Biden delivered his inaugural address in Washington, D.C., the streets around the California state Capitol remained quiet.

Sacramento Police tweeted at 9:10 a.m. that there were "no active demonstrations downtown," but that a large law enforcement presence would remain around the state Capitol building today.

Ahead of anticipated violence at the state capitol today, Sacramento City Council heard a presentation last night from the city’s police on their response to recent demonstrations downtown.

Sacramento Police say they’ve logged 7,176 hours of overtime and racked up more than $600,000 of taxpayer money covering the weekly pro-Trump rallies at the state capitol. Chief Daniel Hahn says those demonstrations, which have nearly all led to violent clashes between far-right groups and antifa-aligned counter-protesters, have put Sacramento at risk.

"One group, based on what some experts say is a white extremist group seems to desire to return to our past while the other group seems to want to destroy our form of government all together. Regardless of their ideology, they both put our community in danger," Hahn told the council.

The department’s approach recently has been focused on keeping the pro-Trump group and counter-protesters separated in the streets. They say that’s to be even-handed in their response to demonstrations.

But not everyone agrees with that assessment. Some members of the public say officers have given one side preferential treatment.

Maria Elena says she felt the department’s report even highlights racial bias in police response to racial justice protests and those put on by white demonstrators.

These two groups that are predominantly anglo were able to be separated for long periods of time by law enforcement," Elena said. "Our Black and Brown advocates who have been on the streets would not see that length of time and that amount of space between them.

Twenty-seven people have been arrested at recent pro-Trump demonstrations — the majority of which were antifa counterprotesters.

As Joe Biden takes the oath of office in Washington D.C. Wednesday, a large law enforcement presence remains in Sacramento as officials guard against possible violent protests around the California state Capitol building.

Last week the FBI warned of the potential for "armed protests" at all 50 state capitols, though the California state Capitol was quiet Sunday despite reports of planned protests. Around 1,000 National Guard troops remain in Sacramento after being deployed by Gov. Gavin Newsom last week. A fence remains around the Capitol building, as well, and the California Highway Patrol and Sacramento Police will also be in the area Wednesday.

The precautions come after the deadly attack on the U.S. Capitol Jan. 6 by pro-Trump extremists, and a series of weekly protests by far right groups in Sacramento. Those events have attracted members of the Proud Boys — a white supremacist street-fighting gang usually recognizable in their black and yellow attire — and other groups such as the Three Percenters and the California State Militia, another paramilitary group.

Individuals associated with antifa have shared fliers and images on social media that indicate the left-wing group will have a presence on inauguration day in downtown Sacramento.

All this comes as Sacramento City Council discussed violent actions and protests after Election Day, many of which have turned violent.

Despite sometimes violent confrontations by far-right and majority-white demonstrators in Sacramento, local activists have noted that the law enforcement response has been less swift than during racial justice protests this summer.