Supporters of President Donald Trump, conspiracy theorists and members of far right paramilitary movements convened in Carson City for a rally on Saturday. 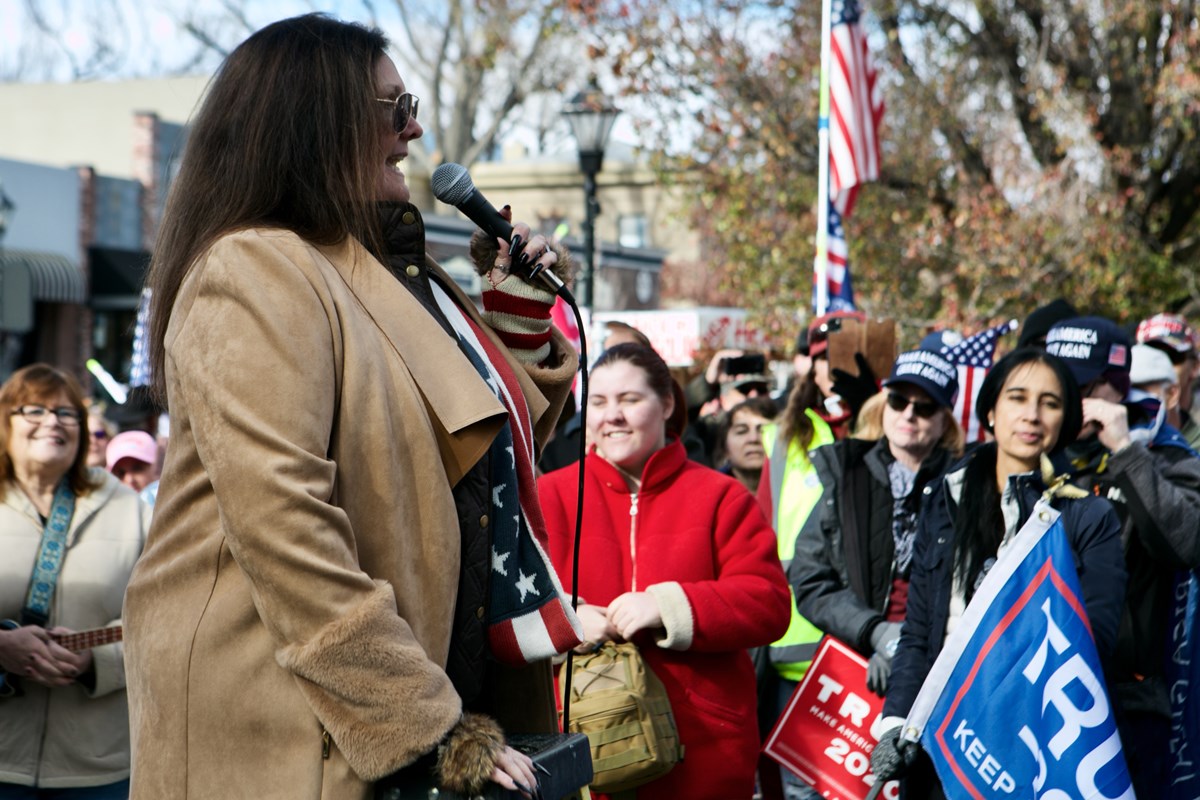 “Joe Biden is not your president-elect,” she said, without providing any evidence.

To become president, a candidate must win at least 270 electoral college votes. Biden won the race with at least 290 and will take office when Trump’s term ends in January.

Jaye also took the opportunity to plug her own political ambitions, announcing she would run against incumbent Republican Congressman Mark Amodei in 2022.

“I’m tired of people not working for we the people,” she said.

Larry Witzig was at the rally to show support for Trump and the far right Three Percent militia network. He’s also a “Boogaloo Boi,” which means he supports an anti-government extremist movement seeking to instigate a second civil war. 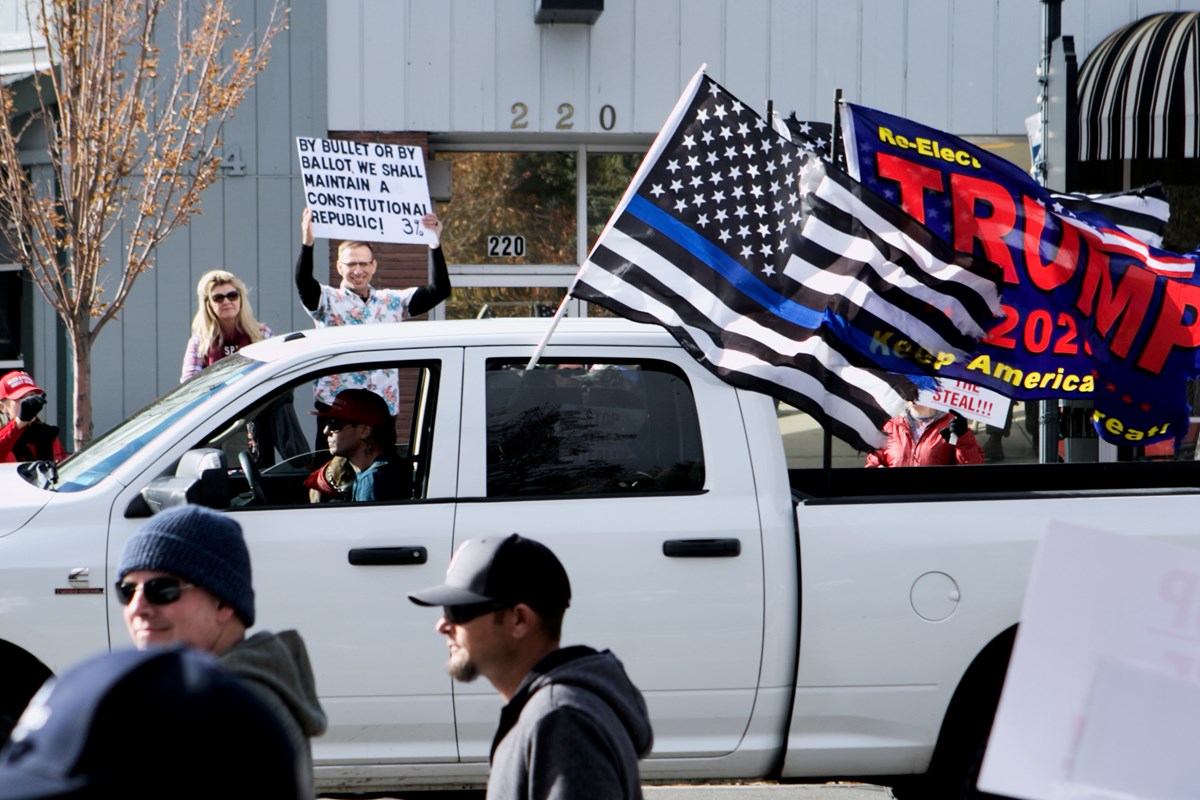 Larry Witzig (with sign) is a supporter of the Three Percenter militia network and the boogaloo ideology, which advocates for a second civil war.Bert Johnson / CapRadio

“If this election fails, it’s time to boogaloo,” he said. “We’re going to fight.”

Two followers of the boogaloo ideology were charged with killing two law enforcement officers in California earlier this year. Another group of boogaloo supporters were arrested in Las Vegas for allegedly planning to attack protesters during Black Lives Matter events.

Last week in Carson City, a gang of Proud Boys threatened to assault Black Lives Matter supporters and others they believed were members of antifascist groups.

Reno resident Nikki is one of the counter-protesters they targeted. She says the Proud Boys, who are members of a white nationalist group that encourages violence, were trying to start a fight.

“They were telling me that they were going to knock my fucking teeth out,” she said. “Same with my kid.”

Nikki declined to give her last name, because she’s concerned local far right groups might try to “doxx” her, or publicly reveal her contact information in order to intimidate her into silence.

She estimates the harassment and threats continued for about an hour, until the Proud Boys left. But she was determined not to back down.

“Most of these people are bark and no bite,” she said.

But Nikki said many activists she knows were planning to avoid the area this time around, to be safe.

“It has struck enough fear to where people are going to let this ride out, at least for a little while,” she said. 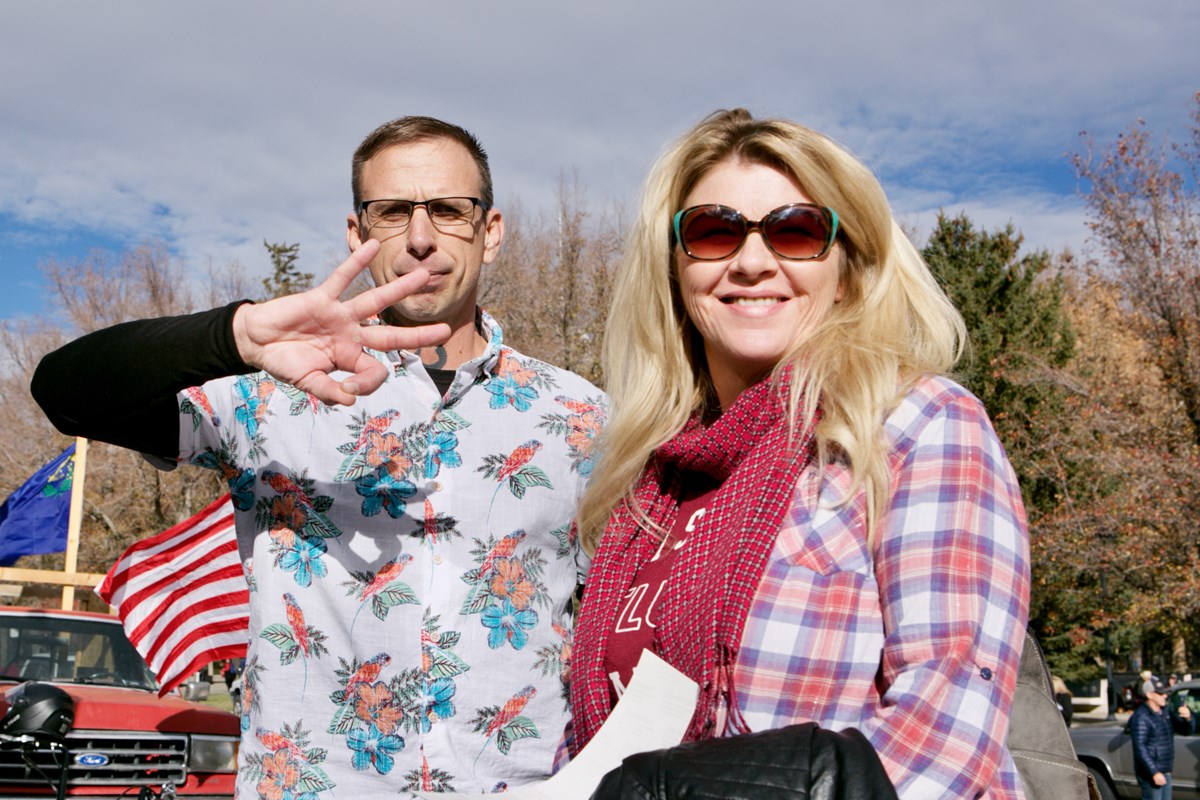 Larry Witzig (left) is a supporter of the Three Percenter militia network and the boogaloo ideology, which advocates for a second civil war.Bert Johnson / CapRadio

According to Undersheriff Jerome Tushbant of the Carson City Sheriff’s Department, this week’s protest ended up being relatively quiet.

“There wasn’t anything particular about this week except for the amount of people,” he said.

Tushbant estimates the crowd numbered about 200. Most attendees were not wearing face coverings, in defiance of a statewide mask mandate meant to curb COVID-19.

New case numbers and test positivity rates have been rising sharply since September, reflecting a new spike in a state that has already been hit hard by the pandemic and its economic fallout. On Friday, Gov. Steve Sisolak confirmed he tested positive for the novel coronavirus.

But according to Tushbant, the Sheriff’s Department generally doesn’t enforce those public health orders.

“We allow the enforcement to be done by the vendors or the people who are owning the businesses, as well as the health departments,” he said.

The demonstration against the election results comes as officials have said the votes in Nevada are safe from tampering and the 2020 election was the most secure in American history. 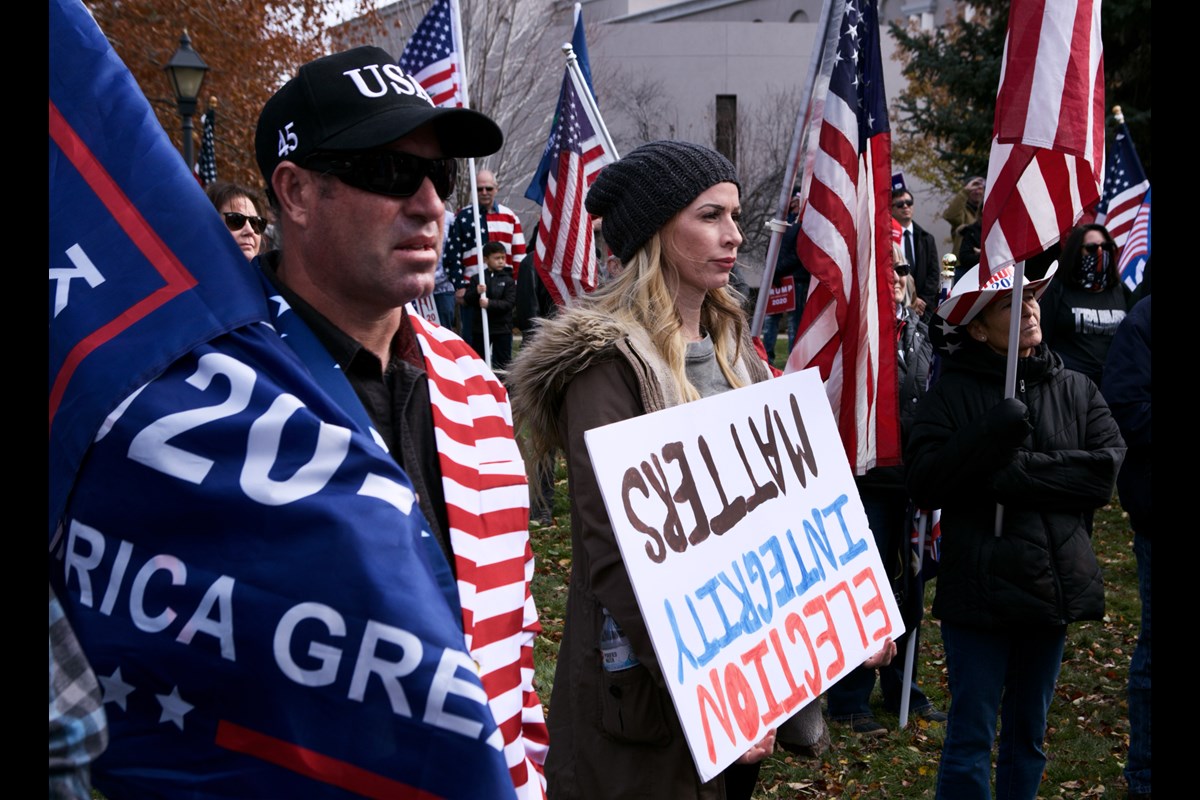 Most attendees of the pro-Trump rally held in Carson City on Nov. 14 were not wearing face coverings, in defiance of a statewide mask mandate meant to curb COVID-19.Bert Johnson / CapRadio

But Trump has refused to concede, helping fuel a constellation of conspiracy theories. Monica Jaye made reference to one of those during her remarks.

“I want to give you just a little bit of hope. And some people will understand this here today: Trust the plan,” she said, repeating a slogan popularized by believers of the QAnon conspiracy theory.

QAnon supporters think Trump is secretly fighting a cabal of devil-worshipping, cannibalistic child molesters in the highest levels of government — falsehoods that draw in part from centuries-old antisemitic myths like the blood libels of the Middle Ages. And in 2018, a QAnon believer from Henderson, Nevada pleaded guilty to making a terrorist threat after he blocked traffic on the Hoover Dam. 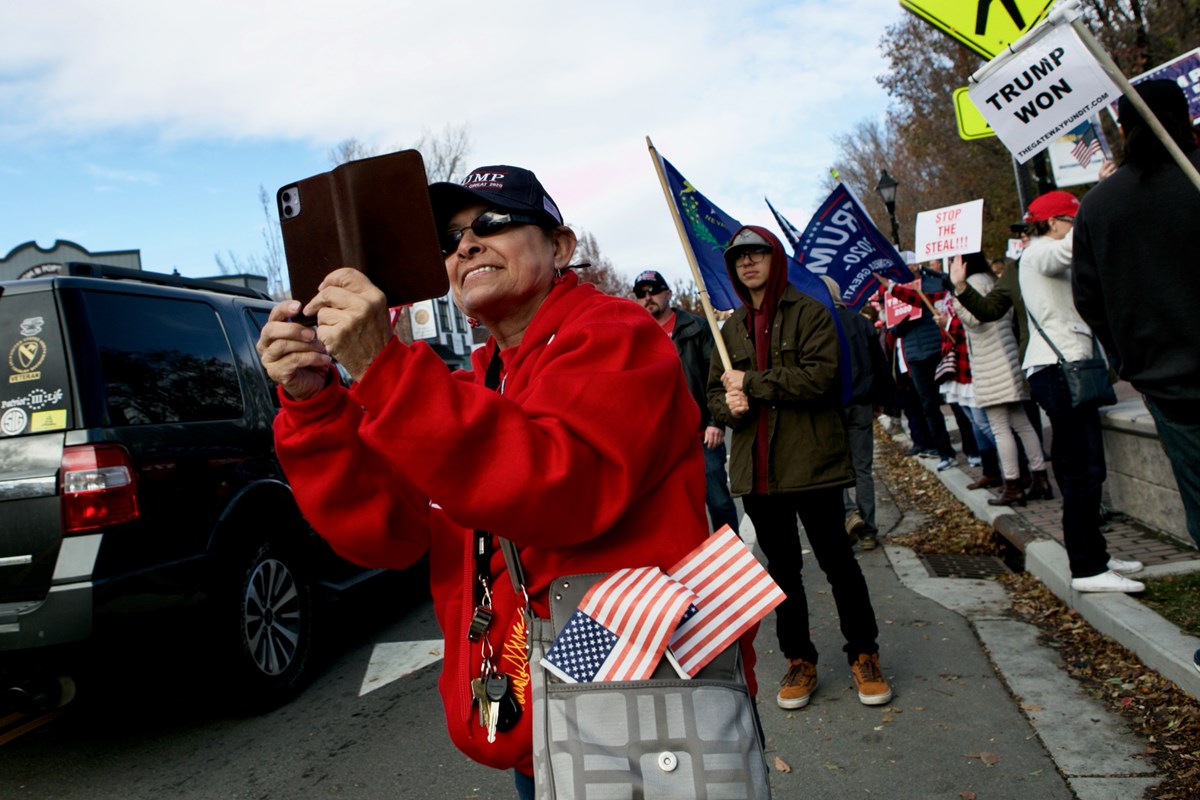 Most attendees of the pro-Trump rally held in Carson City on Nov. 14 were not wearing face coverings, in defiance of a statewide mask mandate meant to curb COVID-19.Bert Johnson / CapRadio

Demonstrator Larry Witzig won’t accept any outcome other than a Trump win, but also expressed optimism about the Trump campaign’s strategy of filing lawsuits to obstruct ballot counting in battleground states.

“We feel pretty good about the way things are going with the courts and the recounts,” he said.

But he told CapRadio if that fails, he’s ready to engage in violence on behalf of Trump and the far right ideology he follows.

In the event of armed domestic conflict, he also said government agencies like the National Guard should stay out of the way.

“We’re imploring you to stand down,” Witzig said. “When we come through, don’t square up with us.”