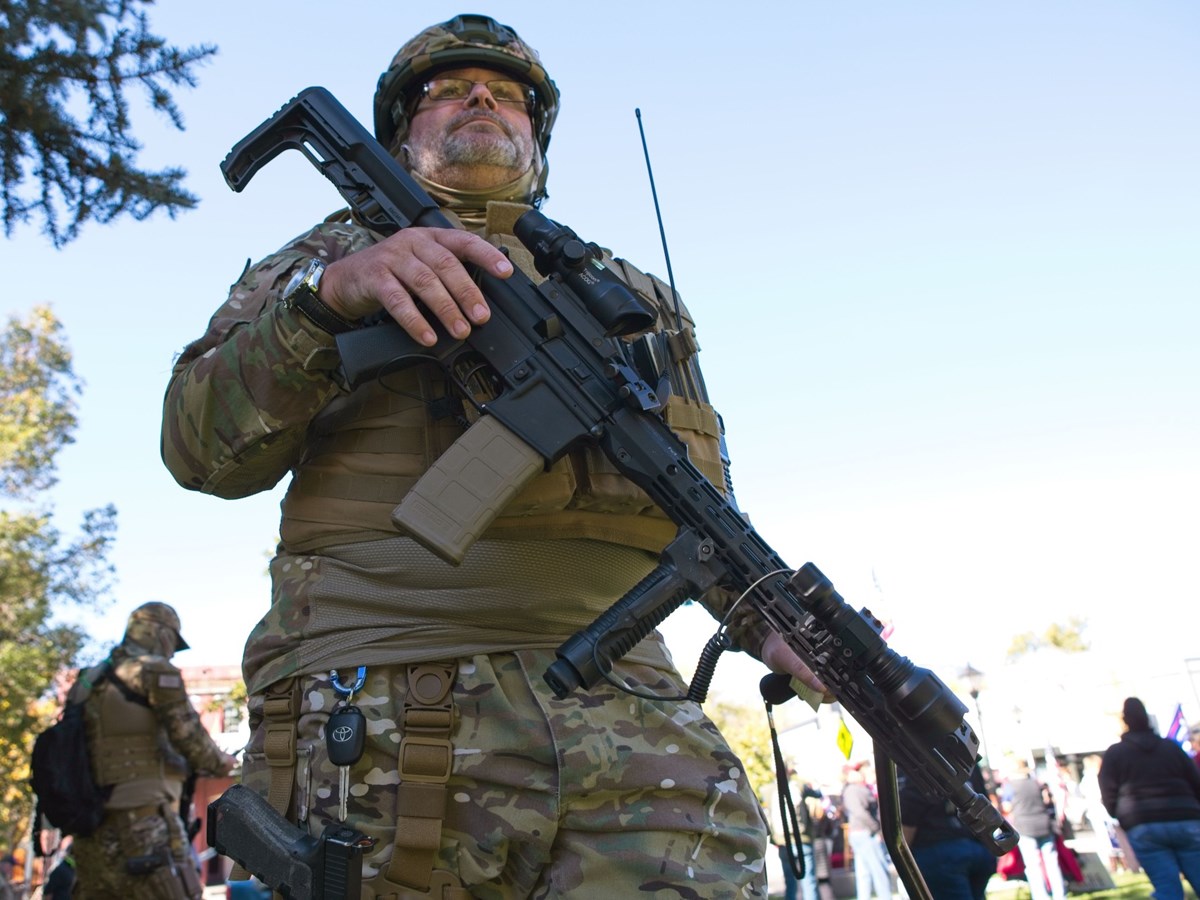 Adam Moore of Carson City is the founder of the Battle Born Patriots militia. He spoke to a crowd of Trump supporters on Oct. 24, 2020 at an event with lawmakers and members of a group seeking to impeach Gov. Steve Sisolak.

The Minden-area lawmakers shared a stage with the leader of a local paramilitary group and an organizer singing Merle Haggard covers.

During his two visits to northern Nevada since September, the president urged supporters to go to the polls and watch for electoral fraud on Election Day. So will Lequieu take action?

“Probably, because I got a feeling that BLM and antifa are going to be out here doing voter intimidation,” he said.

Nevada has been a hub for far-right extremist groups since the Sagebrush Rebellion, which was an anti-government movement that began in the late ‘70s. But in an election year where the sitting president refuses to commit to a peaceful transfer of power, experts warn their violent ideology could be a threat to the community — and the democratic process.

Lequieu’s a member of the Three Percenters, one of the largest militia networks in the country. So when he shows up to counter-protest against racial justice demonstrations, he comes wearing tactical gear — and he’s usually joined by heavily armed cohorts carrying assault weapons.

Lequieu can’t carry his own gun, though, because he was sentenced to two and a half years in prison for his role in the 2016 standoff against federal agents at the Malheur National Wildlife Refuge, where he stood shoulder-to-shoulder with Ammon Bundy.

He says militias will need to mobilize again after Election Day, because he expects antifascist activists and Black Lives Matter supporters to go on the offensive if Joe Biden is defeated.

According to The Armed Conflict Location & Event Data Project, about 95% of recent Black Lives Matter demonstrations have been peaceful.

“I think Trump is going to win real big,” he said. “They're gonna lose their minds and want to start some more rioting and looting.” 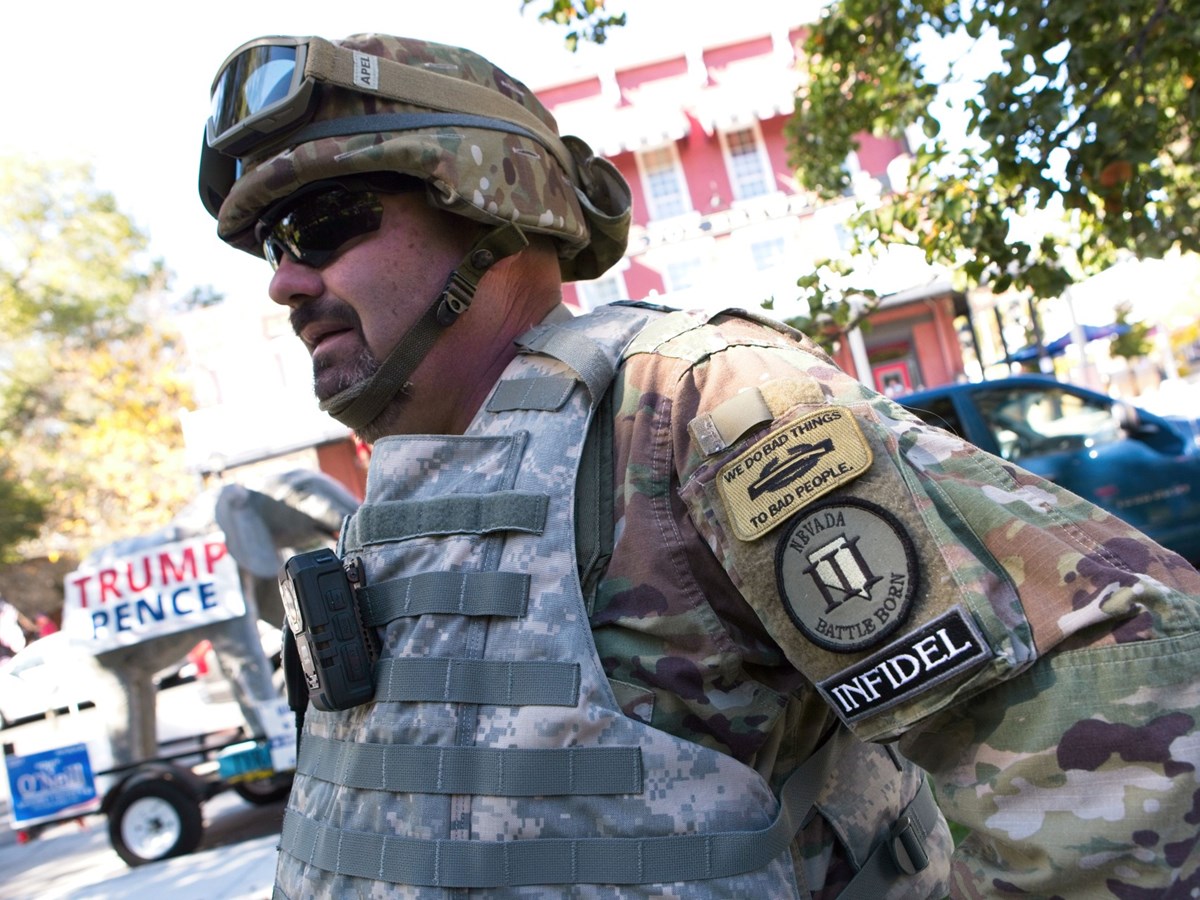 The far-right movement has deep roots in Nevada.

Bob Fulkerson with the Progressive Leadership Alliance of Nevada (PLAN) has been tracking the movement since the ‘90s. He says back then, right-wing extremists kept a low profile. But now they’re organizing in plain sight.

“The identitarians, the Proud Boys, the Boogaloos, the Three Percenters, the white nationalists, they don't care. They're right up front,” he said. “Kind of a mainstreaming of white terrorism and hatred.”

According to an analysis of state statutes by the Institute for Constitutional Advocacy and Protection at Georgetown Law, private militias are prohibited under Nevada law.

“I would like to see that happen,” Fulkers said. “That is not happening, at least from what I can see. Maybe there’s things behind the scenes.”

He also hopes the report will put Patriot groups on notice.

Fulkerson first became aware of the movement thanks to a rash of anti-government and hate-motivated attacks around Reno.

“Back then, there were anti-public sector, anti-choice, anti-LGBT, anti-immigrant. And then it started getting violent, with the bombings,” he said.

An attempted bombing in 1995 targeted the IRS building in Reno. While the device in that plot failed to explode, there were other, more sinister attacks linked to the far right — including the murder of William Metz by a white supremacist.

Two decades later, in 2014, Cliven Bundy made headlines for a standoff with Bureau of Land Management agents near his ranch in Bunkerville, Nevada.

The dispute started when Bundy, who grazes cattle on federal land, refused to pay the fees he owed. When federal agents showed up to confiscate his herd, Patriots from around the country showed up and surrounded them.

No shots were fired, but the feds decided to back down in order to avoid a shootout with the heavily-armed crowd.

Two years later, Bundy’s son, Ammon Bundy, led a standoff in Oregon that lasted more than a month. One person was killed in a shootout with federal agents, and 27 people were arrested and charged in connection with the standoff. 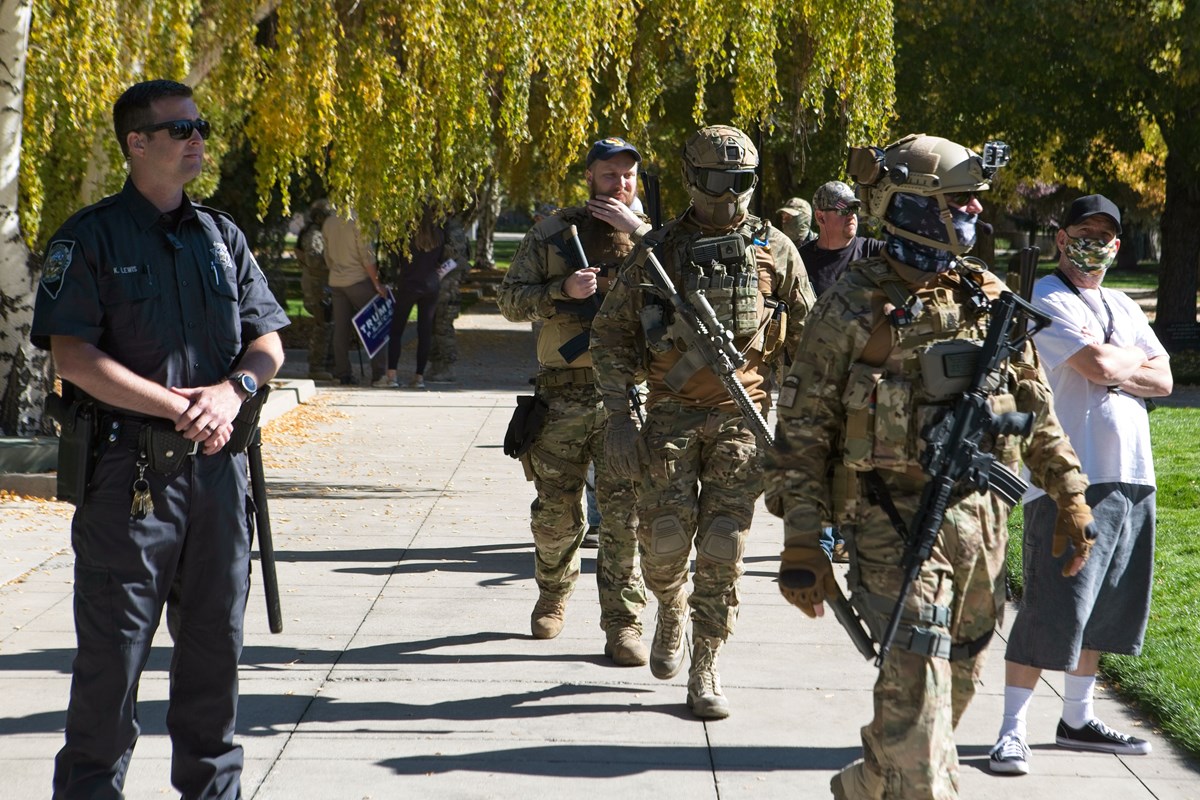 Members of the Battle Born Patriots at an event in Carson City on Oct. 24, 2020.Bert Johnson / CapRadio

Cloee Cooper is not surprised to hear conspiratorial claims coming from the far right. She’s a researcher with Political Research Associates who follows groups like the Three Percenters.

Cooper says the president often speaks directly to the Patriot movement, which in turn has largely allied itself with his administration.

“When Trump uses statements around, for example, antifa and inflaming the idea that antifa is a domestic terrorist threat, you also are seeing within the Patriot movement groups that they really run with that type of rhetoric,” Cooper said.

Antifa, which is short for antifascist, is an umbrella term that includes leftist and anarchist groups. There is no antifa organization, but there are antifascist groups in many cities across the United States — although not all of them engage in direct action or protests.

But since Trump took office, antifa has become one of his favorite punching bags.

Three Percenters are part of the wider Patriot movement, along with the Oathkeepers and other paramilitary groups. They all share a broad interpretation of the Second Amendment, an opposition to racial justice reforms and a disdain for government regulation.

Many Patriots also think the movement for Black lives is actually a front for a secret Marxist takeover. According to “The Terrorist Next Door,” a seminal book on the Patriot movement by Daniel Levitas, that’s a racist belief that has its roots in the segregation-era South.

The far-right movement is also growing, thanks to anxieties around the COVID-19 pandemic and a fraught political climate.

Frederick Rofer says his group has seen a spike in new members lately. He’s an organizer with the Northern Nevada Minutemen, a Patriot group based in Minden. He told CapRadio they had at least 246 active members in September.

“I believe by now it's grown even more,” he said. “It's like, I don't know, people sticking up for what they believe in and [wanting] to protect what we have, not have it taken away. So the more the merrier.”

According to Cooper, Patriot groups represent the fastest-growing branch of the far right.

“Today, we're really seeing that the Patriot movement is having some of the most influence in the streets, but also kind of as a dynamic force,” she said. “Not surprisingly, Nevada plays a very critical role.”

Samantha Kutner says when it comes to the far right, Trump’s speech has consequences — like the political violence that has played out since he took office. The pandemic and the economic crisis that followed have only added to the risk, she believes.

“We have all of these enormous challenges and a rhetoric that has not only persisted, but has been exacerbated and resulted in further violence,” she said.

Kutner is an independent researcher who’s been following the far right since 2017. She fears this time around, the election could be a dangerous flashpoint in an already difficult year.

“When you factor in the Patriot militias who are loyal to Trump, there is a high likelihood that more violence can occur,” she said. “It's important to account for how bad things can get and prepare for the worst.”

In October, more than a dozen members of the Patriot movement were charged with trying to kidnap Michigan Governor Gretchen Whitmer. And in 2017, Three Percenters marched in the streets of Charlottesville alongside neonazis, klansmen and white nationalists.

Government officials have been sounding the alarm over racially-motivated extremism, too. In February, FBI Director Christopher Wray told Congress it was the “primary source of ideologically motivated lethal incidents” in the country. 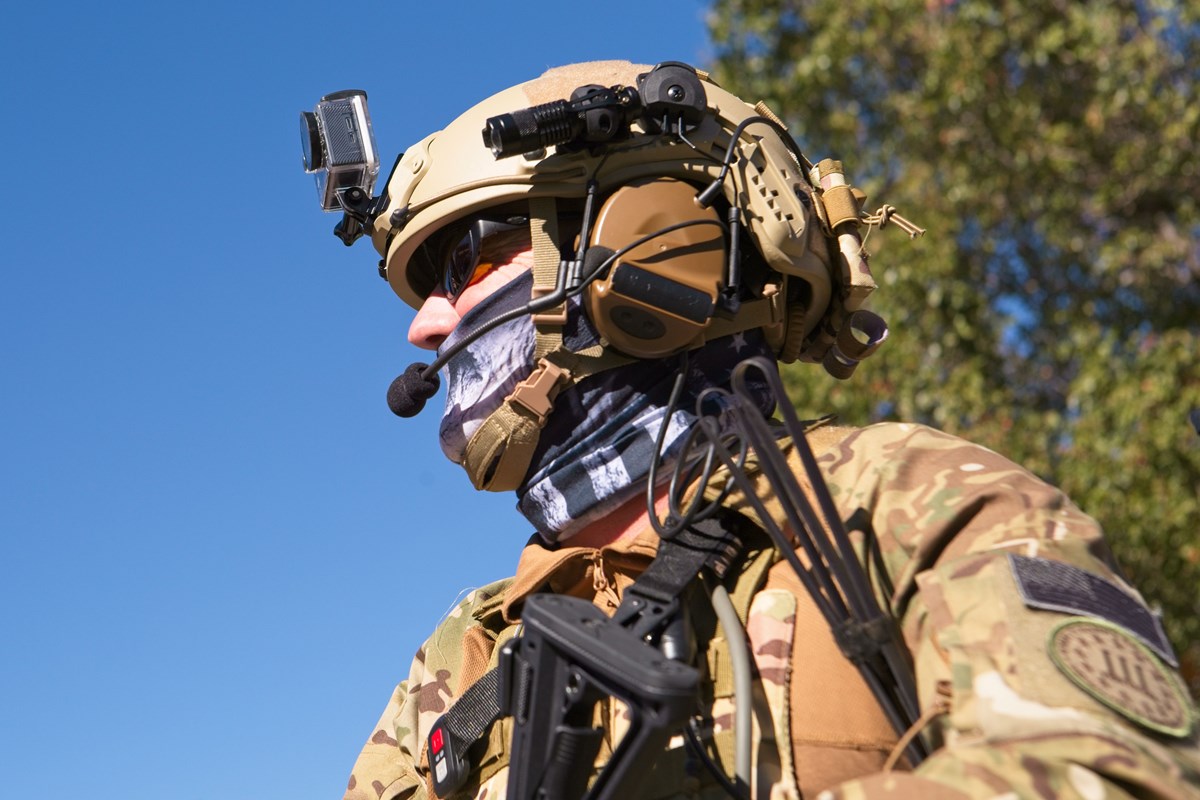 A member of the Battle Born Patriots at an event in Carson City on Oct. 24, 2020.Bert Johnson / CapRadio

Adam Moore says he’s not motivated by hate. He’s the founder of the Battle Born Patriots — another one of the many Three Percenter groups in Northern Nevada.

They also bring guns to protests and potentially to the ballot box. But Moore says they don’t want to intimidate anyone.

“None of us ever hope that we have to use our weapon. That is the last thing any of us want,” he told CapRadio at a recent Carson City protest. “We don’t like to hear that people are intimidated by it.”

So far, election officials are reporting a record number of vote-by-mail ballots pouring in.

But with Trump’s baseless allegations of electoral fraud ringing in Nevadans’ ears — and the possibility of guns appearing at polling places thanks to the state’s open-carry laws — experts are concerned the Patriot movement could pose a real threat on Election Day and the days that follow.

Kutner said the risk isn’t restricted to organized groups, either. As the conditions for violence get worse, she said it becomes more likely that seemingly random violence will occur.

To Engageante Jackson, the presence of weapons at protests feels like a threat, no matter how the Patriot movement tries to explain it.

“It's like this: You're ready for a war,” she said. “Am I not supposed to be threatened by that?”

Jackson has been organizing weekly Black Lives Matter protests in Carson City since June following the police killing of George Floyd. She says at each demonstration, armed militiamen are there, too.

And while she’s not anti-gun, Jackson says they’re using their rights to suppress hers.

“I support the Second Amendment, but I don't support it when people are using it to put fear into other people's hearts.”