California election officials are hoping to clear up confusion among some voters registered as No Party Preference about which party they can support in the state’s March 3 presidential primary.

Unlike other elections, a voter’s party makes a big difference in the presidential primary.

Sam Mahood, a spokesperson for the California Secretary of State’s Office, said questions came up after No Party Preference voters received postcards asking which party ballot they want. The cards have just three options: The Democratic Party, Libertarian Party and the American Independent Party.

Mahood said the choices are limited not because election officials are withholding them, but due to the political parties themselves. 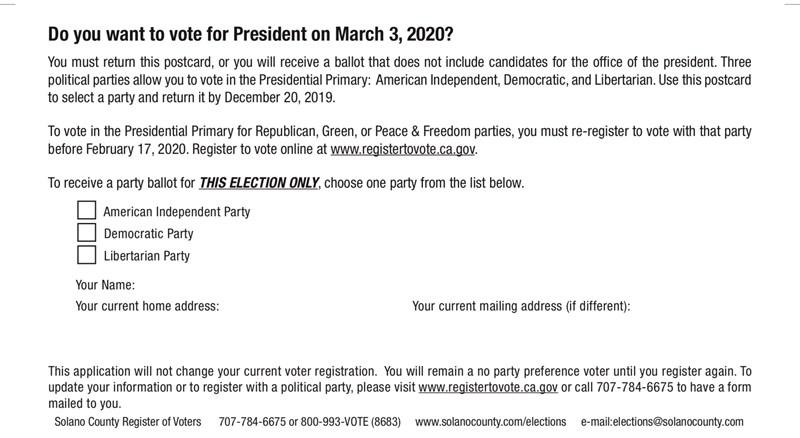 This is the postcard sent to those in Solano County who have registered as No Party Preference.

The Peace and Freedom Party, along with the Green Party, also opted against allowing so-called ‘crossover’ voting.

One frustrated No Party Preference voter emailed CapRadio a photo of the postcard she received and asked: “I got this in the mail. Where is the option for Republican????!”

The answer? Election officials say she’ll need to re-register as a Republican to request a ballot for that party.

Californians can re-register to vote at registertovote.ca.gov. The deadline is  Feb. 18. After that, “you may need to register to vote in person at a polling place, vote center, or your county elections office,” according to the Secretary of State’s website.

No Party Preference voters who do not return the post cards to their county elections office will receive a non-partisan ballot without any presidential candidates listed, according to the state.

Even then, voters will still have options to change. They can request a crossover ballot — one that allows them to vote for the American Independent, Democratic, or Libertarian candidates — from their county elections office or re-register if needed.

They can also take their non-partisan ballot to their polling place or any vote center and exchange it for one of those ballots. Information for all county elections offices is available here.

Last month, the Secretary of State’s Office emailed 1.7 million NPP voters who had email addresses on file to inform them of their options.

As of early 2019, there were more than 5.6 million No Party Preference voters in California, surpassing registered Republicans in the state. That was up 35 percent from the last presidential election.

More information is at HowToVoteForPresident.sos.ca.gov