Watch A Replay Of The Inauguration:

Inauguration Day Is Over, And The Newsom Era Has Begun

The events of inauguration day have concluded, and the Gavin Newsom era of California has officially begun.

We’re done with updates for today, but you can look back through the blog below to see the sights and stories from the Capitol ceremony, and find continuing coverage of state government here.

Thanks for following along!

Schwarzenegger Looks Back At His Own Inauguration 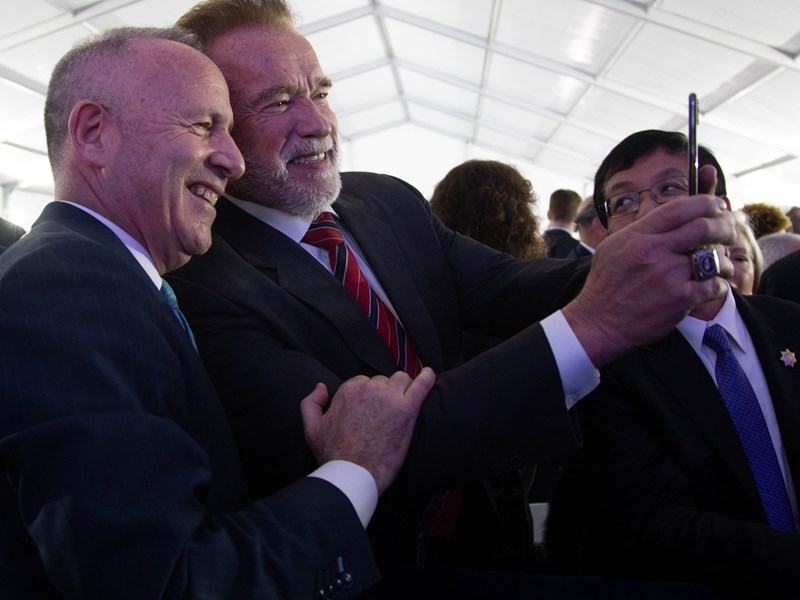 Arnold Schwarzenegger had an inauguration unlike any other California governor.

Taking over after the recall of Democrat Gray Davis, California's most recent Republican governor was inaugurated Nov. 17, 2003, the only governor to be sworn in during that month.

"'Why do you say that?' And they say, 'Because it's gonna be the only day when you're really going to be happy. From now on, it goes downhill,’" he told CapRadio's Ben Adler Monday.

"But it's true enough, and I got into office, and I realized what they were talking about, because you do step into this office and the overwhelming amount of problems and challenges — challenges from the past, challenges in the present, challenges that are coming up in the future, and stuff like that," he said. " And to me I always looked at those challenges in a very enthusiastic way because I felt like anything is possible."

Hear more of Adler's interview with Schwarzenegger here, including his thoughts on Gov. Newsom.

California Republicans discussed working with Democratic Gov. Gavin Newsom following his inauguration Monday, a reflection of the party's recent difficulties in the state.

While this will be the first time since 1887 with back-to-back Democratic governors, Republicans don't currently hold a statewide office, and control barely a quarter of the seats in the state Legislature.

"California is facing some very serious issues as we move into 2019," Waldron said. "And we look forward to working with the governor in a bipartisan way to solve many of those issues. We feel we can support a lot of the goals and work on some of the others and make things happen for our citizens."

Republican Rep. Doug LaMalfa of Oroville said while there was much from Newsom's address he didn't agree with, he was also encouraged to hear Newsom bring up rural issues in his address.

"For me, to serve my constituents, you build on the things you can find as common ground, the low-hanging fruit, and take those issues and work forward," LaMalfa said. "There's going to be a ton of stuff we'll never agree on that he outlined in his speech today but I have to — to serve my constituents the best I can — find those common ground things and be successful, and we'll work around it."

While the attention was expected to be on Gavin Newsom and his vision for California during his inaugural address, another Newsom stole the show.

Newsom’s 2-year-old son, Dutch, escaped his mother’s arms and wandered his way onto the stage a few times during the speech, drawing laughs and cheers from the crowd.

Newsom, who’s focused on education throughout his campaign, picked up his son and kept talking.

During the inaugural address, Newsom touched on his commitment to providing support for parents and families.

“My wife Jennifer and I have four children, and there is nothing more important to us than giving them a good and happy life,” he said in his speech. “But all kids – not just the children of a governor and a filmmaker – should have a good life in California…. Not ripped away from their parents at the border…  Not left hungry while politicians seek to pour billions into a wall that should never be built.”

Read a full transcript of the inaugural address as prepared here.

Gavin Newsom Sworn In As Governor Of California

Gavin Newsom is officially governor of California. He took the oath of office, administered by California Chief Justice Tani Cantil-Sakauye, just before noon.

Chants of “Gavin!” from the crowd drowned out protesters who were escorted from the ceremony outside the state Capitol.

Newsom’s inaugural address focused on the idea of the California Dream.

“The story of our state is the story of a dream – one that has drawn strivers and seekers here forever,” he said. “It’s what brought my family to California three generations ago – the promise not just of a better life, but a bigger one, with opportunities they couldn’t find anywhere else in the world.”

Those in attendance at the event include San Francisco Mayor London Breed, Los Angeles Mayor Eric Garcetti and Sacramento Mayor Darrell Steinberg, all seen dancing in the crowd of the main event tent.

Spectators Outside Capitol Drawn To Inauguration For Different Reasons 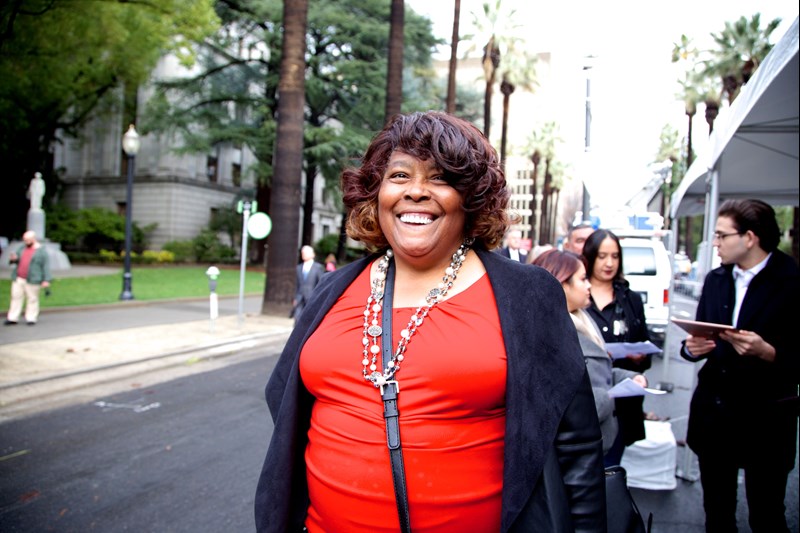 Many of the people waiting outside the Capitol for today's inauguration are with progressive interest groups and unions supportive of Gavin Newsom.

Yvonne Walker, president SIEU Local 1000, said Jerry Brown was supportive of state workers and expected Newsom to be, as well.

"They're two different guys — both of them phenomenal," Walker said. "I think it's an unfair comparison. It's like what kind of chocolate do you like? It's chocolate. Both of them are great."

John Gore, chair of the Sonoma County Board of Supervisors, said Newsom's challenge will be dealing with a powerfully Democratic legislature that will be testing him. Brown has had to be a leader but also hold lawmakers back, Gore said.

He said Newsom will have to do that as well, but Gore thinks he can.

"He's in a place where he has the support of California," he said.

But Chris Ross, 24, was part of a group of about 30 people protesting Newsom.

"The middle class is being taxed out of California," Ross said. "Gavin Newsom plans on raising these taxes to continue breaking the middle class instead of giving us tax breaks and letting us stimulate our own economy." 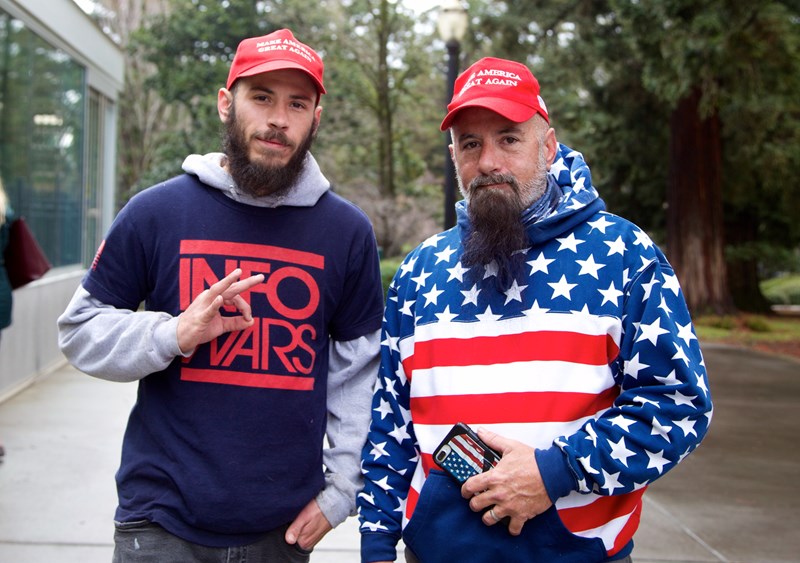 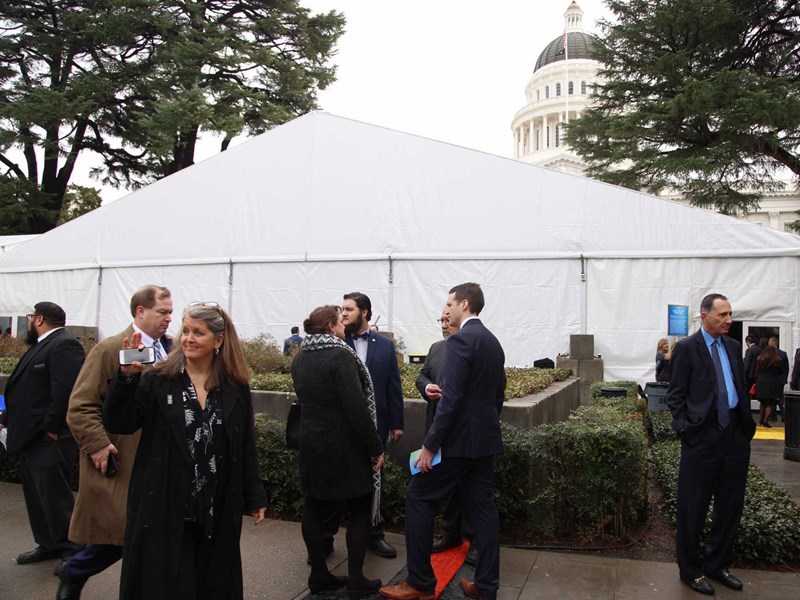 Tents were set up outside the Capitol for Gov. Gavin Newsom's inauguration on Jan. 7, 2019.Andrew Nixon / Capital Public Radio

It’s a rainy inauguration day for Gavin Newsom and those attending the ceremony outside the state Capitol building.

Three tents have been erected for guests — only one of which has a direct line of sight to the stage. The side tents only have video boards because all tents are now fully enclosed due to weather. 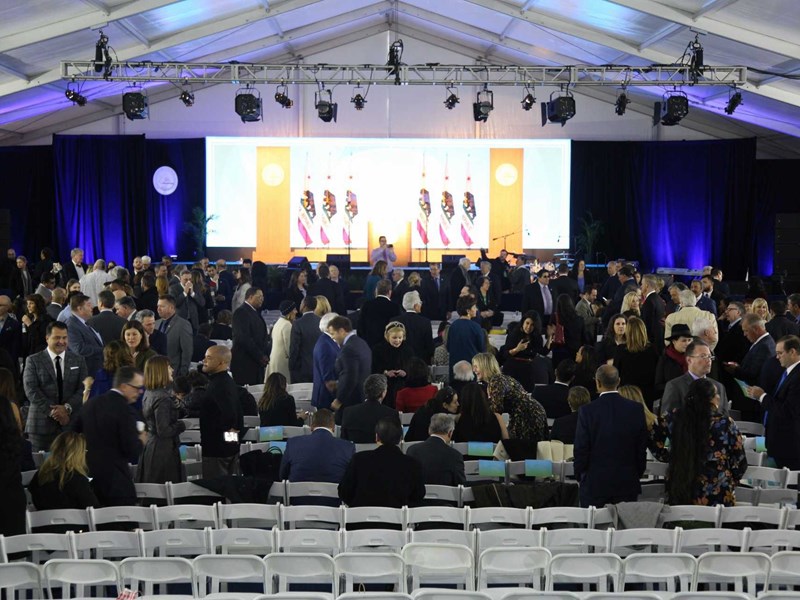 The ceremony is set to begin at 11:15 a.m., with the oath of office taking place about noon.

Newsom's Inauguration Not The Only One Happening In Sacramento Monday

While much attention will be on Gavin Newsom this afternoon as he officially takes over as governor of California, he’s not the only one being sworn in to state office today.

Here’s a list of the other inauguration ceremonies happening throughout Sacramento:

Democrat Gavin Newsom will be sworn in as California’s next governor today. On the campaign trail, he made bold promises about creating universal healthcare and building millions of new homes.

CapRadio’s PolitiFact reporter Chris Nichols will be following those promises and other as part of the ‘Newsom-Meter,’ a project that will track the governor’s top campaign pledges over the next four years.

In all, the project will follow 12 promises and offer regular updates on their progress, or lack thereof. Ultimately, we’ll rate each as ‘Kept’, ‘Broken’ or ‘Compromise.’

You can follow all the of the promises and read more about the project here.

Davis said that for a time Newsom, who will be sworn in as governor today, couldn’t wait for the top job.

“Several times he was thinking about running against Jerry Brown,” Davis said in an interview on Insight With Beth Ruyak. “And I was trying to tell him I think the world of him and can’t we find a way where you guys aren’t running against each other.

"Happily, I’m sure, many people advised him similarly, Davis said. "So, he spent eight years watching the Brown administration function. He should have all the skill sets and all the experience he needs to be a fantastic governor. Not a good governor, a fantastic governor.”

Davis added that the job requires some luck, such as avoiding a deep recession. He described governing as more art than science.

Listen to the full interview with Davis on Insight today at 9 a.m.

Looking Back On Jerry Brown's Final Term As Governor

Recently we spent time with Brown at his family’s ranch in Colusa County and reflected on his impact on the state.

From the policy decisions he won’t refer to as his “legacy,” to his Latin- and literature-laced “Brown-isms,” you can see all of the stories, interviews, photos and videos here. 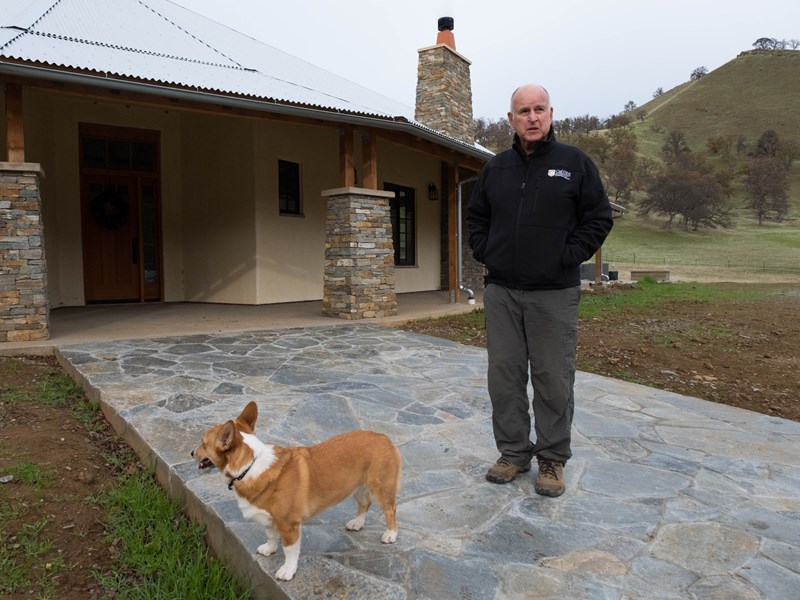 Gov. Jerry Brown stands with his dog in front of his house on his family's land near Williams in Colusa County.Andrew Nixon / Capital Public Radio
back to top

Here's What To Expect From Gavin Newsom's Inaugural Address

“The country is watching us,” the governor-elect is expected to say in his speech, according to excerpts released by his transition team. “The world is waiting on us. The future depends on us. And we will seize this moment.”

Newsom will take the oath of office at noon outside the state Capitol — under a tent because of bad weather.

“We will offer an alternative to the corruption and incompetence in the White House,” his remarks read. “Our government will be progressive, principled, and always on the side of the people.”

Newsom has signaled he will propose taking the first steps toward universal preschool for four-year-olds and more investments in child care programs. He will also call for an expansion of California’s paid family leave program for new parents from six weeks to six months.

“We will prepare for uncertain times ahead,” the governor-elect will say. “We will be prudent stewards of taxpayer dollars, pay down debt, and meet our future obligations. And we will build and safeguard the largest fiscal reserve of any state in American history. But let me be clear: we will be bold.”

Newsom is not expected to get into specific proposals in his inaugural address — or how he will pay for them. But on Thursday he will release his first state budget plan.

On Sunday, the governor-elect held a lunch for major donors at Sacramento’s Crocker Art Museum. He then hosted an event for children and families at the California Railroad Museum. And he ended the evening with a benefit concert for wildfire victims at the Golden 1 Center, home of the Sacramento Kings.

Newsom said the concert raised nearly $5 million. “And that’s after expenses. I know how to do budgets.”

Speaking with reporters during the concert, Newsom said his inaugural address will strike an idealistic tone.

“Let me preview the punditry,” he joked. “People will say, oh, he was short on specifics. Well, of course, I have an inaugural. But I’ll be very detailed in the budget, a few days later, and then we will architect in much more nuance and detail at the State of the State.”

back to top
Correction: A previous version of this post misspelled the name of SEIU Local 1000 President Yvonne Walker. It has been updated.
Follow us for more stories like this