The Oroville spillway scare, flooding and frequent downpours have underscored the need for flood insurance and flood prevention measures in California. Some of those measures are inconvenient and expensive. But some people will go to great lengths to live near water.

Not long ago, Sutter County produced a documentary about the 1955 flood that killed 38 people. Norma Bartlett describes being in her car as it was inundated with water from the Feather River.

"The wall of water, about four feet high, hit me and drowned the car out,” says Bartlett. “I realized immediately that I had to get out of the car because I had my little boy that was two years old and he was sitting in the seat and the water was almost over his head."

She and her son got out and stood on top of the car. A helicopter rescued them the next day. Her husband, Robert, was swept away by the water and drowned.

The flood is one of six that has hit the county since 1900. It's the primary reason Sutter County participates in the National Flood Insurance Program.

But it comes with inconveniences for residents like Marge Daddow, who lives near the Feather River about 17 miles south of where the levee broke in 1955.

Daddow’s "ground floor" is nowhere near the ground. It’s built on 17 feet of stone blocks to put it above the Federal Emergency Management Agency's 100-year flood level. But that was not the original construction plan.

"We had a very nice contractor,” she says. “He said, 'Alright. We'll make it two-story," 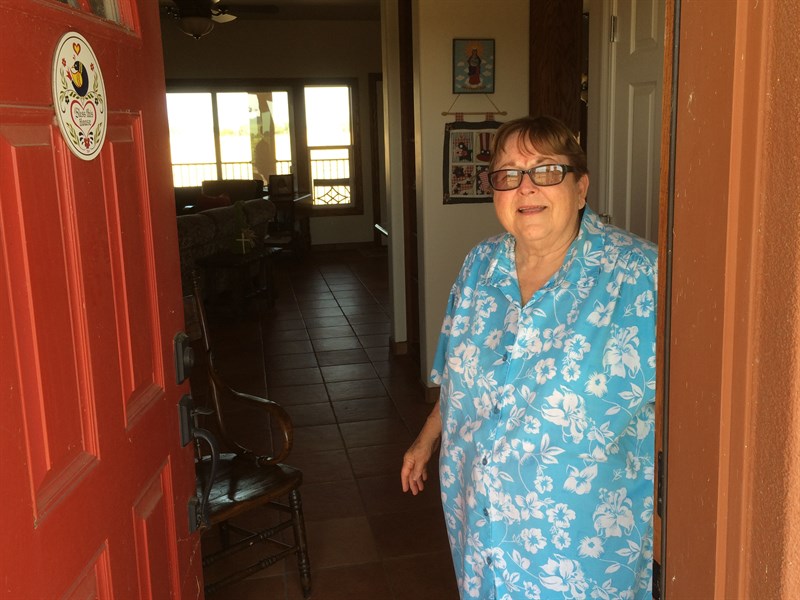 Sutter County resident Marge Daddow poses for a picture in her home near the Feather River. Her home was constructed to be above the Federal Emergency Management Agency's 100-year flood level. Bob Moffitt / Capital Public Radio

She already had two knee replacements, two hip replacements, and three back surgeries. Her doctor insisted she needed an elevator. Daddow says the elevator came at the price tag of $28,000.

"But, the elevator wasn't FEMA's fault,” she says. “The doctor said, 'I am not putting that lady back together again.'"

Insurance for the Daddows’ farm equipment required that the machines be elevated too.

"They just added another floor and added a ramp to run the harvesters up in there," she says. 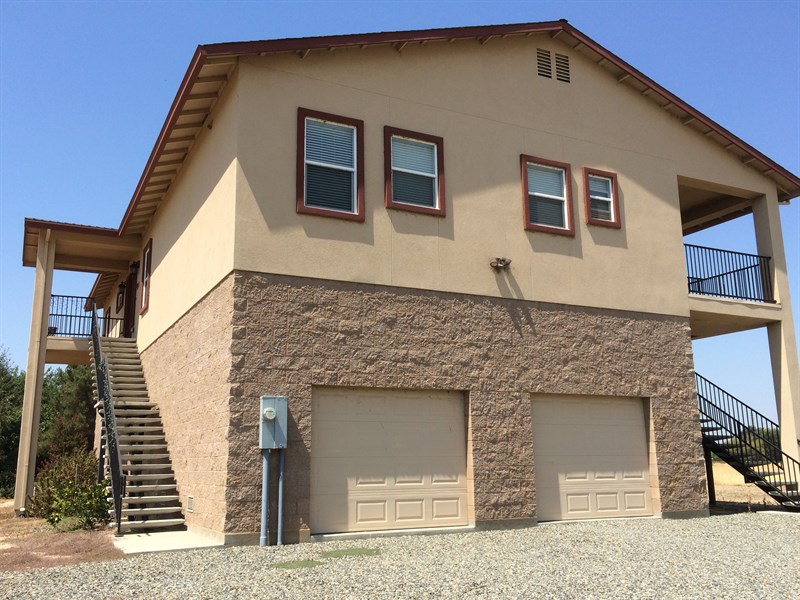 Picture of Sutter County resident Marge Daddow's house. Following multiple surgeries, her doctor insisted that she install an elevator so that she can get up the stairs. Bob Moffitt / Capital Public Radio

She doesn't know if she needs the 17 feet of clearance. But she remembers the flood of 1955, which happened on the opposite side of the river.

"This only got nine inches deep here,” she says. “My father was up here working on the hole in the levee and he finally just left ... the equipment. He couldn't get it out of the hole and these levees, if you go down a foot, are white, fluffy sand."

The levee failure allowed a 21-foot wall of water into the southern part of Yuba City and 12 feet of water into downtown. The water pushed homes onto railroad tracks and wiped out a bridge not far from her home.

She's also seen flooding from levee breaks east of the Feather River, on the Marysville side.

The Federal Emergency Management Agency (FEMA) says the inconvenience of having a home on a 17-foot foundation is the price to pay for building in a floodplain.

Frank Mansell, a Natural Hazards Program Specialist with the agency, says the flood insurance program is offered in communities that take steps to prevent flood damage.

"As much as we don't like to see building in the flood zones that are mapped, it requires those communities enforce on their residents building codes that are safe," says Mansell.

In January, the State of California adopted international building standards.

The new rules mean 4,000 people in the Sutter County floodplain will be looking even higher — as high as 25 feet — if they want to build.

"There's actually someone who sells dirt out here because they know there's gonna be a need based on new construction and stuff like that. So we got the surplus dirt,” says Johl. “That came at a cost of about $25,000 and including shipping and stuff like that, was about 120 truckloads.” 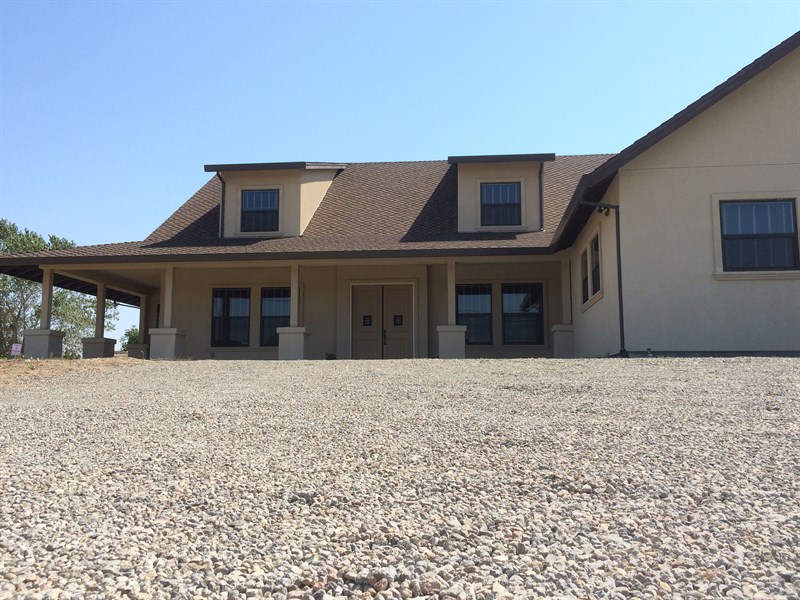 He doesn't know if people will try 25 feet.

"I know people were planning on building in that area because they were landowners or bought a little property,” Johl says. “You know, 25 feet's gonna be hard to do."

The rules also affect other construction. Dave Hyatt and his employees were hired to build a shop just down the street.

"The only thing (Sutter County) made (the proper owner) do, instead of having to raise up way above the road, is they made him change the height of the outlets and the panel box to get that above the flood area,” says Hyatt. “Other than that, they really took it easy on him."

Hyatt says a friend who lives nearby was not so lucky.

"Instead of just putting the vents in the walls, (Sutter County) actually made him put hydraulic doors so the whole walls would open up and the water could flow through,” he says. “They hit him for quite a bit." 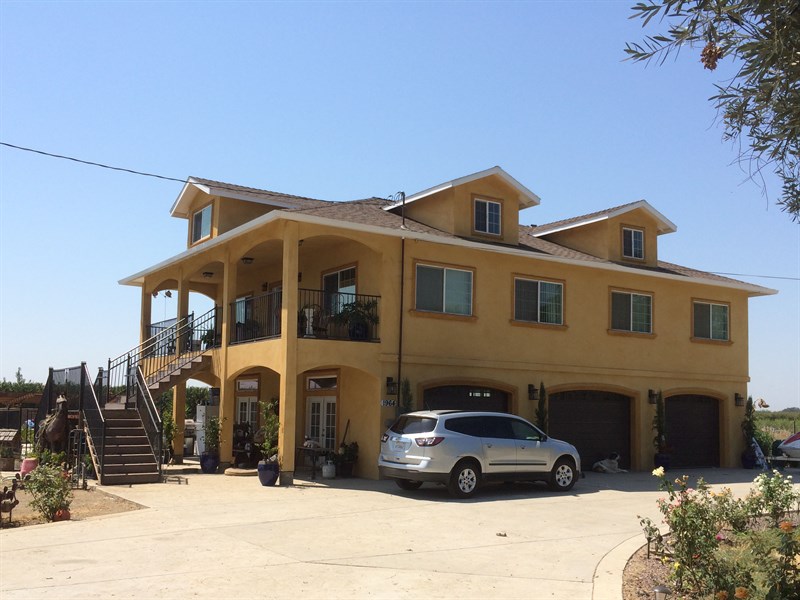 Building standards in the Sutter County floodplains must be met for people to be eligible for disaster aid. This shop had to install hydraulic doors that could open up on the ground floor in case of a flood. Bob Moffitt / Capital Public Radio

Participation in the national flood insurance program is required for people in the county's floodplain to be eligible for disaster aid or federally-backed mortgages.

Even with its flooding history, Sutter County has one of the best flood protection ratings in part because of a series of local, state and federal levee projects. Homeowners pay less for insurance because of the rating.

Sutter County has received $2.4 million in damage claims from FEMA since 1978. That’s a fraction of a percent of what FEMA paid California, at $522.5 million.

The average claim in California is a little less than $17,000. The nationwide average is $33,000, in part because of the flooding caused by Hurricane Katrina in Louisiana and Mississippi in 2005. Of the $56.7 billion in claims paid, $19.29 billion was paid in Louisiana.