A Riverboat That’s Not Afloat: The Old Spirit Of Sacramento

Drivers cruising along Garden Highway north of Sacramento may notice a giant white three-story paddleboat high and dry on the shore next to the river.

Caution tape and “keep out, private property” signs adorn the great vessel. The only passengers this boat has seen in years are the dragonflies that flit in and out of the broken windows.

Where did this massive watercraft come from? How did it get on the shore? What’s going to happen to it? 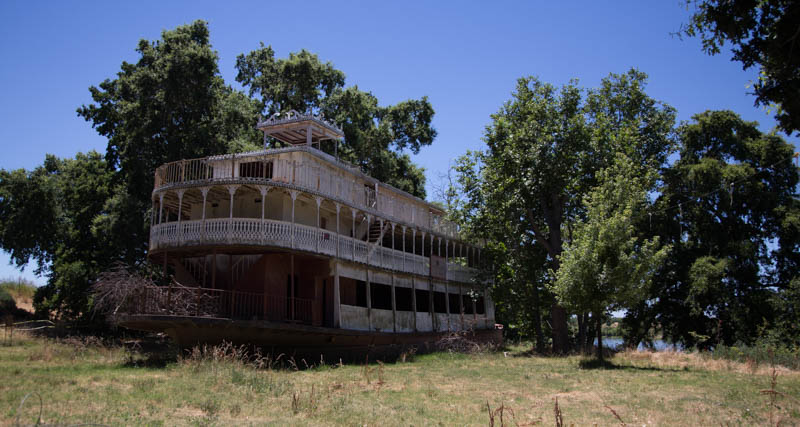 “Well, it's at the marina in Northern Sacramento, Rio Ramaza. I was going to actually do a partnership with the owner of the marina and we were going to make it into a floating restaurant and he ended up dying about two years ago,” Barker says. “The new owner didn't want to make it into a restaurant so it's kind of just doing nothing right now, just floating.”

That’s when we broke the news to Captain Barker. “It’s on the shore right now. It’s been beached for a while, from what I can tell.”

“Oh, I didn't even know that,” says Barker. “I haven’t been up there for a while. How could it be on the shore?” 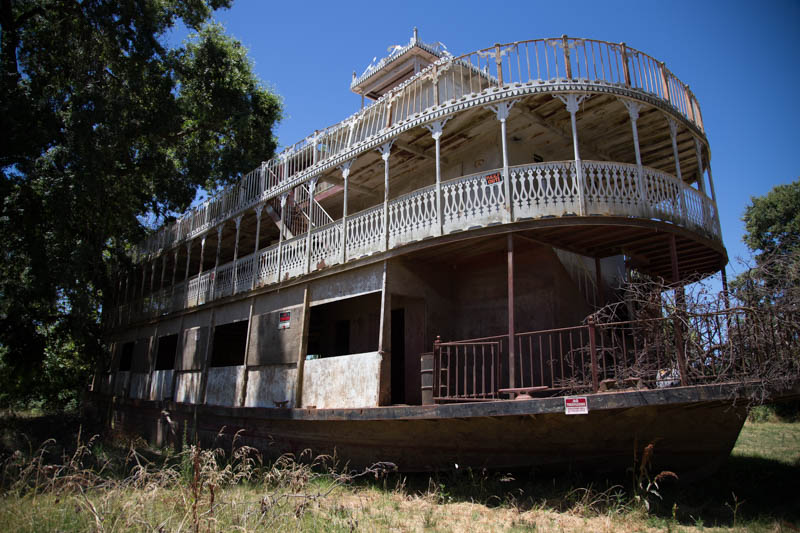 We repeatedly called the marina and left many messages over the course of three months. But we never heard back about the Spirit of Sacramento.

The boat was originally an Army Corps of Engineers snag boat called the Putah. It was built in 1942 by the Berkeley Steel Construction Company. Snag boats would go up and down the river removing obstructions from the river bottom to clear the way for other vessels.

In 1950 John Wayne (yes THE John Wayne) bought the Putah and fixed it up for the 1955 movie Blood Alley, starring Wayne and Lauren Bacall. After the movie Wayne sold the boat to a Sacramento businessman, Frank Parisi, who renamed it the Mansion Belle and ran river cruises throughout the 1960s.

In 1991 the boat was once again purchased, this time by Channel Star Excursions and renamed the Spirit of Sacramento. The company ran five years of successful dinner cruise until a fire destroyed most of the ship. 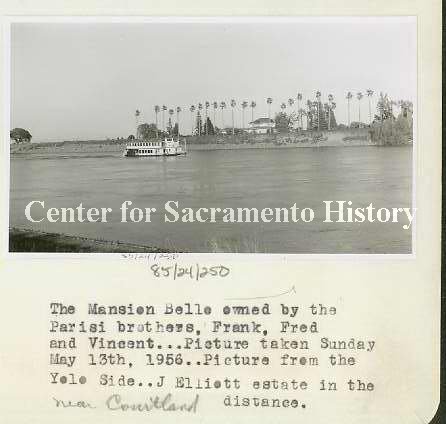 That’s when Barker came into the picture. He purchased the Spirit of Sacramento in 1996 for about $120,000. He says it was really just the hull at that point and he had to rebuild the three decks. His plan was to run dinner cruises. He has a few other dinner cruise ships in Long Beach. But a series of permitting issues, vandalism and other unfortunate events set him back every time he got close to opening for business.

“I had a lot of vandalism over the years, every time I’d get it almost finished, I had it close to 90 percent at one point, and it all got vandalised. Stole all the wiring, broke all the windows,” says Barker. “And then it sunk, it was sunk for a while.”

At one point the state of California had to sue Barker to get him to move the boat as it was docked precariously upstream from other people’s boats and there was fear of it breaking loose and smashing up the neighbors’ watercrafts.

This is when California State Maritime Lawyer Peter Pelkofer got involved. He sued Barker to move the boat. That’s when Barker moved the ship up river to the Rio Ramaza Marina.

“As long as the vessel was legally moored in Rio Ramaza… I’m not concerned. We were concerned of course when it was in the Sacramento River periodically sinking and so on,” said Pelkofer. “As soon as somebody puts it back in the river we’re going to be concerned again - and that seems to be the likeliest scenario, although how they get it back in the river I’m not sure.”

Since the boat is out of the water it’s out of the State’s jurisdiction. And it’s not threatening other boats on the river or in a marina.

We spoke to Barker again when the other Spirit of Sacramento sank, he’s still not sure what he’s going to do next. He says he’s dumped about half a million dollars into the boat and never turned a profit.
Follow us for more stories like this