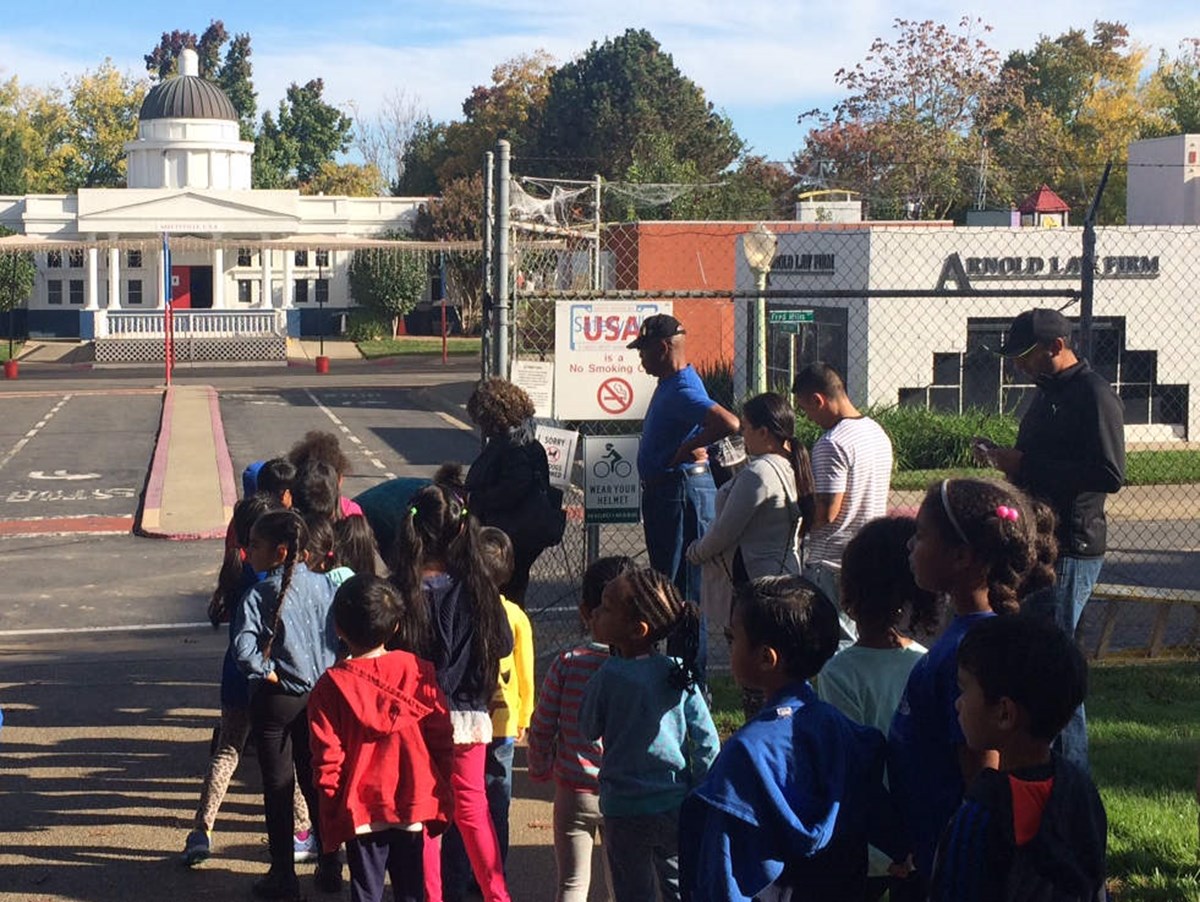 Have you seen the Safety Center/Safetyville USA sign on Highway 50 in Rancho Cordova? Maybe you’ve seen the miniature buildings while cruising down Bradshaw Road. But unless you were a Sacramento-area elementary school kid within the past 32 years you might not know what this little town is all about.

Safetyville is a tiny town, built in 1984, with 17 buildings that are about one-third the scale of a real city, complete with working traffic lights and a train crossing.

Safety experts would lead kindergarteners and first graders from the Sacramento region on tours inside the tiny town. Kids learn about fire safety, how to cross the street, what to do if approached by a stranger and how to call 911.

Elizabeth McClatchy is the president and CEO of Safety Center. She says the idea came from the Sacramento Women’s Club, whose safety-conscious female members wanted to build a space where children would learn in a realistic setting.

“I think the original vision was to have cardboard cutouts of a village and they’d take them around to schools, but our board thought perhaps we could get a campus and build a little miniature village,” McClatchy says.

So they formed an educational non-profit organization called the Safety Center. According to a 1984 article in the Sacramento Bee, the project cost between $1.2 million and $1.3 million, and was paid for by donations.

McClatchy says having a physical space to practice safety without any real danger is really important for cementing the concepts in young minds.

“There are lot of studies that document that actually going through things, and physically doing things, is a more valuable approach to safety. In our docent-led tours, there are a lot of hands-on lessons,” says McClatchy.

One of those docents is Brittnee Nelson, who’s training as a firefighter paramedic. On a recent sunny morning, she leads a group of first graders from Elk Grove through the little city. She explains how to safely cross the small road.

“Who has seen one of these before?” she asks referring to the crosswalk light. “So when there’s a red hand, like this, should I cross the street?”

“What if there’s no cars coming?”

“Yes!” one girl calls out excitedly.

“Nooooo,” Nelson and the other children  say in unison.

Then the children practice crossing the street one by one.

“Is that McDonald’s and Taco Bell real?” a girl with long brown pigtails asks.

“They’re real buildings but there’s no food inside,” Nelson says to the visibly disappointed child. “I know, it’s a bummer.”

One of the ways the city is funded is through “tenants,” such as Raley’s, McDonald’s and Shriner’s Hospital. 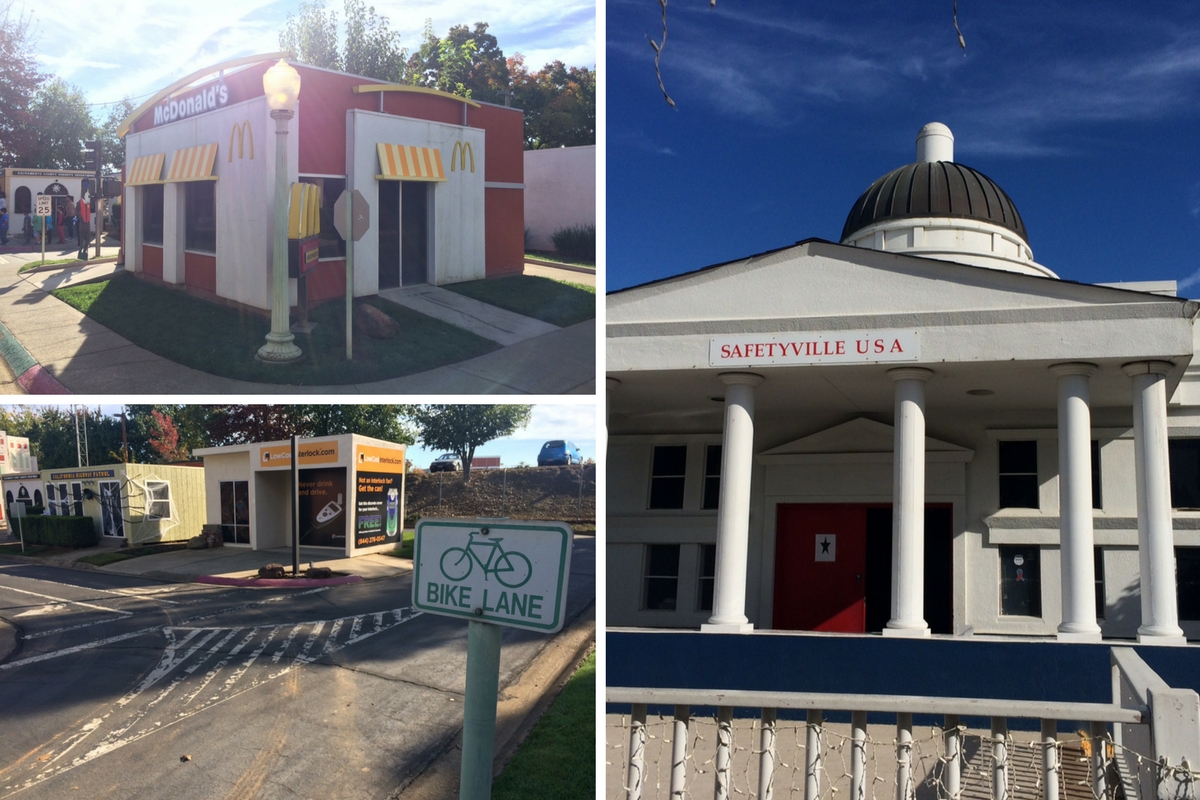 “Companies lease these buildings for anywhere from $1,500 a year to $2,500 a year, depending on the size of the building,” says McClatchy.

Safetyville is now one of many safety villages across the country. McClatchy says when Safetyville was first completed it was very unique, possibly the first of its kind in the US, although safety villages are common in Europe. According to the Bee article, children who participate in these safety programs had 89 percent fewer injuries than kids who don’t.

Mashable created a video about a safety village in Ashville, New York.

Salen Singh grew up in the Fiji Islands and he says he learned safety lessons at a similar small safety city. He’s chaperoning his daughter’s field trip to Safetyville. 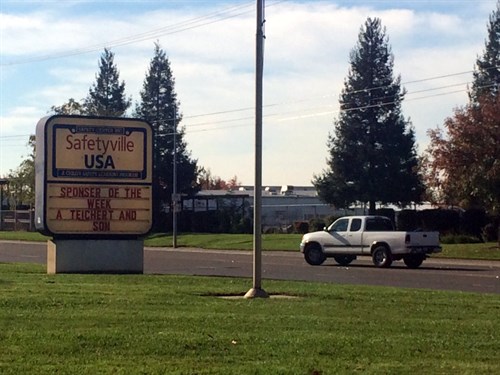 “It’s an awesome opportunity to teach children about safety tips and things parents don’t think about,” says Nelson. “This is a great way to actually save a life.”

After the tour the children unpack sack lunches and run around on a grassy patch at the entrance to the tiny city.

“I learned about fire stations and about safety,” she says through bites of a peanut butter sandwich. Her big takeaway? “If you’re not safe you can get in danger and you could get hurt.”

“At the end of the tour, I recap everything I went over and they all know it - they’re screaming it out, they’re excited… I think that’s just awesome because I know for sure I’m saving a life,” she says.