Fewer Wildfires In 2016 On National Forest Lands In California

Federal, state and local firefighting agencies in California have been battling wildfires this year from the Mexican border to the Oregon border. But there are fewer fires on national forest lands in the state so far in 2016, compared to 2015.

The 18 U.S. national forests in California cover nearly 21 million acres, or about 20 percent of the state.

From January 1, 2016 through August 3, 2016, there were 478 fires on national forest land in the state, compared to 1,225 fires at the same time last year, according to Stanton Florea, Public Information Officer with the U.S. Forest Service in Vallejo, California.

"The lack of total number of fires is mainly driven by the lack of lightning fires, we've only had 79 lightning-caused fires so far this year," says Florea, who is based at the U.S. Forest Service Pacific Southwest Region (Region 5) office.

He says with dry forests, and the cumulative effects of more than four years of drought in California, lightning fires can grow rapidly into large, destructive wildfires.

"So that we've had only 79 lightning fires is really what's dictated our fire season," says Florea. "By this time last year we'd had hundreds and hundreds of lightning fires started, and those tend to occur in remote areas."

Florea says the Sierra, Stanislaus and Sequoia National Forests are of "great concern" to the agency because of millions of dead trees.

In June, the U.S. Forest Service announced it had identified an additional 26 million dead trees in California since October 2015.

"The 26 million dead trees are located in six counties across 760,000 acres in the southern Sierra Nevada, and, are in addition to the 40 million trees that died statewide from 2010 to October 2015, bringing the total to at least 66 million dead trees," according to the agency. "Four consecutive years of severe drought in California, a dramatic rise in bark beetle infestation and warmer temperatures are leading to historic levels of tree die-off."

One of the largest wildfires in California history, the Rough Fire, was caused by lightning.

The fire started on July 31, 2015, and before it was contained, it burned 151,623 acres of timber (litter and understory). Most of those acres in the Sierra National Forest (58,541) and Sequoia National Forest (82,573). It is the 13th largest wildfire in California's recorded history.

The view from the Donner Memorial State Park Visitor Center in winter 2015-16. Northern California received near-normal snowfall over the winter.  El Niño favored the north, not the south, and the drought in California is now in its fifth consecutive year.  Ed Joyce / Capital Public Radio

Federal and state fire agency officials have said the "fire season" in Southern California is year-round.

California is in the fifth consecutive year of drought, and dry conditions are one reason that fires have started earlier than normal in other areas of the state.

"Fire season in Southern California, I do think it is a 12-month enterprise now," says Scott Stephens, Professor of Fire Science at UC Berkeley. "Even in parts of Northern California, where we had traditionally very wet periods, we're seeing fires burning in January, December sometimes, which are just unfathomable 15 years ago.

"And climate change is also making this tougher because it's warming things up and making fuels dryer, and droughts are maybe a little bit more frequent."

The drought has improved year over year to date in California, with a reduction in moderate, severe, extreme and exceptional drought. But dry conditions persist for a fifth consecutive year.  National Drought Mitigation Center University of Nebraska-Lincoln / Courtesy 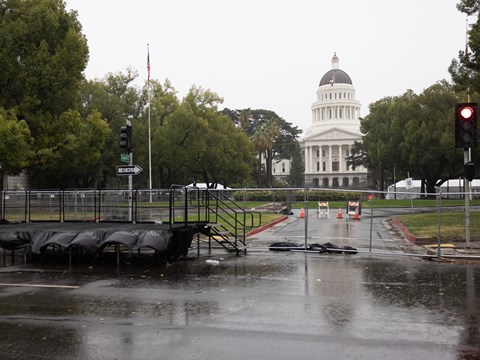