More than three years of drought has reduced reservoir storage in California and groundwater supply. Some wine grape growers in Amador County are worried the limited resource could make this season more challenging.

The National Oceanic and Atmospheric Administration said that, barring "epic rain and snowfall," the drought will continue through at least the spring and likely linger into the summer in California. That's a worry for wine grape growers that rely on groundwater.

"There's a lot of concern out there amongst growers that I work with in the four counties in the Central Sierra," said Lynn Wunderlich, a Farm Advisor with UC Cooperative Extension. She works with growers in El Dorado, Amador, Calaveras and Tuolumne counties.

Wunderlich said the rainfall in each of those counties varies significantly.

"As we move from north to south we see less rainfall generally," explained Wunderlich. "There's also a lot of difference across the foothills in soil and soil water holding capacity. And that's really key for any farmer, the soil depth and the soil texture. Generally in the foothills we have a shorter depth in the soil from the surface to the bedrock, so that all impacts the available water that a grower has."

Because of the drought, Wunderlich said some growers are extending their wells or digging new wells to increase groundwater supply.

"I even had an email from a small grape grower who said he's collected rainwater this season," said Wunderlich. "So people are getting quite creative in their attempts to conserve water, knowing that we're going to have potentially a tough season." 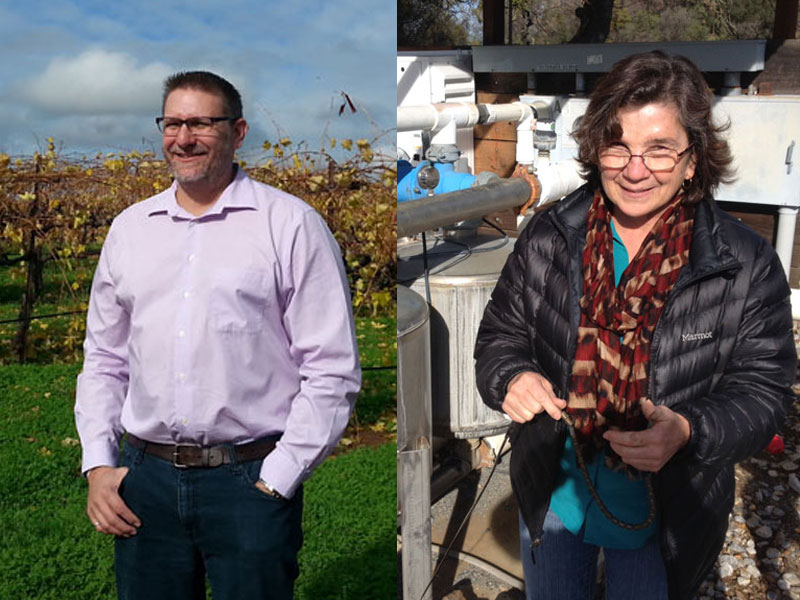 Chris Leamy (left), the winemaker at Terra d’Oro vineyard in Plymouth, said the vineyard is being “thrifty” with water as the drought in California stretched to a fourth year in 2015. At the Shake Ridge Vineyard near Sutter Creek, manager Ann Kraemer (right) uses a "sounder" to measure the water level in one of her wells. Photos by: Woranuch Joyce and Ed Joyce / Capital Public Radio

MORE STRAWS DIPPING INTO THE LAKE DOWN BELOW

Along the rolling hills in rural Amador County, there are more than 40 vineyards. The grapes grown at the 500 acre Terra d'Oro vineyard rely on groundwater, pumped from wells on the property.

"So we're being as thrifty with our water as we possibly can me," said Chris Leamy, winemaker at the Terra d'Oro winery in Plymouth. "And we actually practice what's called "deficit irrigation" where we give the vines a little less water than they need or than they would like."

Leamy wrapped up his 15th harvest as the Terra d'Oro winemaker in 2014. The UC Davis graduate studied biological science and microbiology, but never took a single wine class at the college.

He said the water supply and the grape harvest, has been OK the past two seasons.

The vineyard harvest started earlier than normal last season - the first week of August - and ended earlier too, in October.

"So it was a short, fast compressed harvest, which low water would tend to lend itself toward because the grapes are all going to get riper faster," said Leamy, "because there's no more water out there for them so the vines go into intense ripening mode."

Looking ahead to the 2015 season, Leamy said another drought year is worrisome.

"We've also been trying very hard to use less water in everything that we do, because we do realize that's one of our very finite resources," said Leamy. "We have more neighbors out here in the Valley, which is a good thing: that means we have more interest in our wine region and more growth and that's great. But that also means more straws dipping into that lake down below. It seems infinite, but we all know it's finite."

Like most of the vineyards in Amador County, Terra d'Oro uses a drip irrigation system. 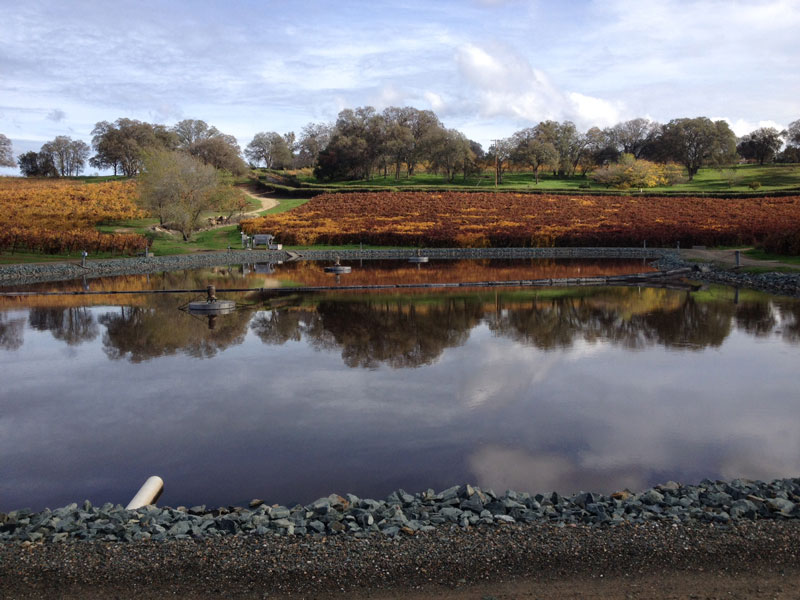 Leamy says after the fruit is picked at harvest, the grape vines are given a "big, long drink of water" before going dormant over the winter months.

He said the drought has helped to spur change and innovation.

"Wineries that once used 50 gallons to do one process, now find a way to do it with 25 gallons," said Leamy. "And just ways to try to save every little bit of water that we can, which in the long run is going to help everybody."

About nine miles south of Terra d'Oro and just off Highway 49 is Shake Ridge Vineyards in Sutter Creek. Like its neighbor to the north, Shake Ridge uses a drip irrigation system to water nearly 50 acres of vines.

"We are on a well, quite deep aquifer, that has been slowly producing less water every year," said Ann Kraemer, manager of Shake Ridge Vineyards, which grows some of its grapes for its Yorba Wines label. "We have a sounder to know what the water level is. Once we turn on the pump, we check the water level, then adjust our irrigation to not lower the level. That way we are assuming at least that amount of water is coming into the well's aquifer, and our pumping will have a minimal effect. But all summer long, that amount of water is less and less."

Kraemer said there are four wells on the 216 acre property. Water is pumped from two of those wells to irrigate the wine grapes.

She uses a 'sounder" - a device that measures the water level in the wells. Kraemer said the amount of water in one well has been dropping since summer. Not "huge, but we have to watch it."

Kraemer said she uses a pruning technique to "fool the grape vines" which conserves water.

"Normally in the Spring I have to like 'trick them by leaving extra buds to use up the spring moisture," explained Kraemer. "And then we'll take those extra shoots away once the vines start slowing down. So then, what we end up with is a smaller vine that doesn't need that much water to get through the rest of the season." 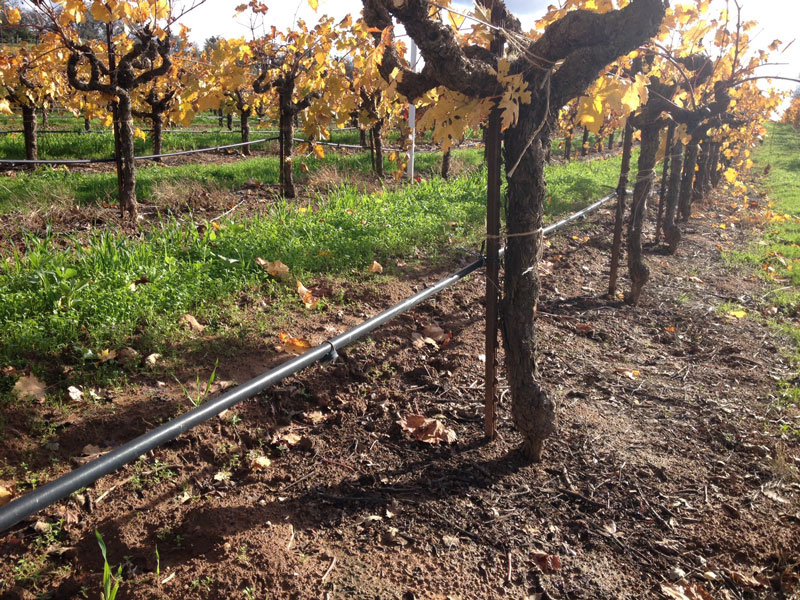 Kraemer said the December 2014 rains didn't add to her groundwater supply. She's hoping for a good snowpack to slowly recharge the aquifer that feeds the vineyard wells.

"We've had 13 inches so far and that's enough to wet the soil profile probably down about three-to-four feet, but that's not going to recharge the groundwater," said Kraemer.

Kraemer said she is hoping for a better snowpack to slowly recharge the aquifer that feeds her wells. So far, that's not happening.

She said grapes are "probably the best crop to be growing in a drought."

"Very little water use, and easy to manage, depending on your soil type. I can, and have, adjusted our irrigation regime yearly to minimize water use, which works well as the vines mature," said Kraemer.

And minimizing that groundwater use will be critical for all California growers this season, not just vineyards.

Reports from U.S. government agencies and academic researchers have said California's groundwater has been drained at a rapid rate. A UC Davis study last summer showed that as the drought continues, and there is less rain and surface water supply, growers use more groundwater.

Whether that groundwater is replenished by snowmelt and rain is up to Mother Nature. The latest federal forecast shows the drought will "persist and intensify" through April 30 and likely linger into the summer. 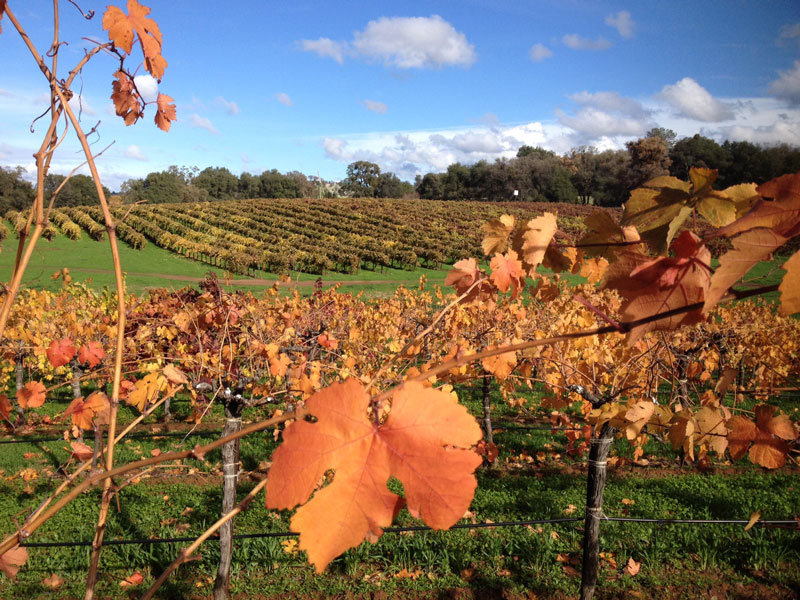 Until late in 2014, California was the only western state without groundwater regulations. In September, three bills were signed by Governor Jerry Brown to “create a framework for sustainable, local groundwater management.”

In a July 2014 UC Davis report, “Economic Analysis of the 2014 Drought for California Agriculture,” researchers said that continued drought in 2015 and 2016 “would lead to additional overdraft of aquifers and lower groundwater levels, thereby escalating pumping costs, land subsidence and drying up of wells.”

One of the report's conclusions was that "groundwater availability and use is the key to agricultural prosperity in the 2014 drought and future droughts.” 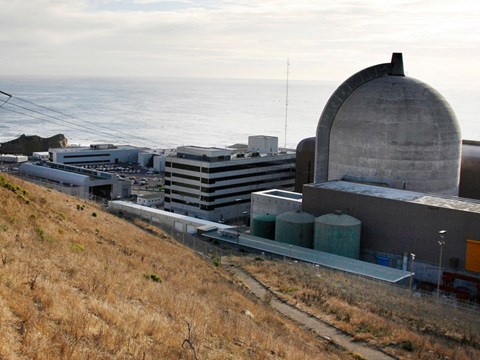