Sacramento animal managers say there are as many as 1,000 colonies of stray cats in the county. If you take a walk at sunset in Discovery Park, you might run into one. Cats lounge around near a picnic table with a great view of the Jibboom Street bridge. These furry animals may be cute, but they pose a threat to humans and wildlife.

About a dozen cats laze around a grassy spot near the two river confluence north of Sacramento. It’s dinner time. A van pulls up. The cats run to it. A man pulls kibble and canned food out of his trunk. 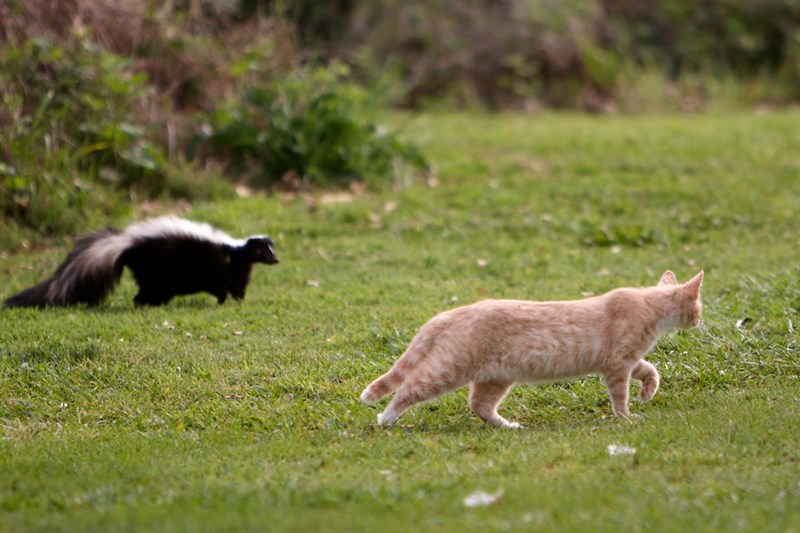 John Havicon is a Sacramento County ranger of 30 years and says the cats have been here as long as he has. There are about 75-100 of them in the parkway. He says they go after song birds and native birds near the ground. Cats eat the food of other animals, too.

“The hawks, the owls, fox, raccoons they’re all dependent on the same food sources. And the cat is taking those food sources, and so the [wildlife] will tend to go away," says Havacon. "So we will see less of the wildlife and more cats, or here, more skunks.”

Havicon says the cats here may not have had veterinary care, and they can pass diseases onto raccoons, fox, and other wild mammals. The cats stay where people feed them. Havicon says you can get a ticket for feeding ducks and geese, but not for feeding the cats.

“It’s in [the cat feeders'] heart[s], they just have to take care of these animals," he says. 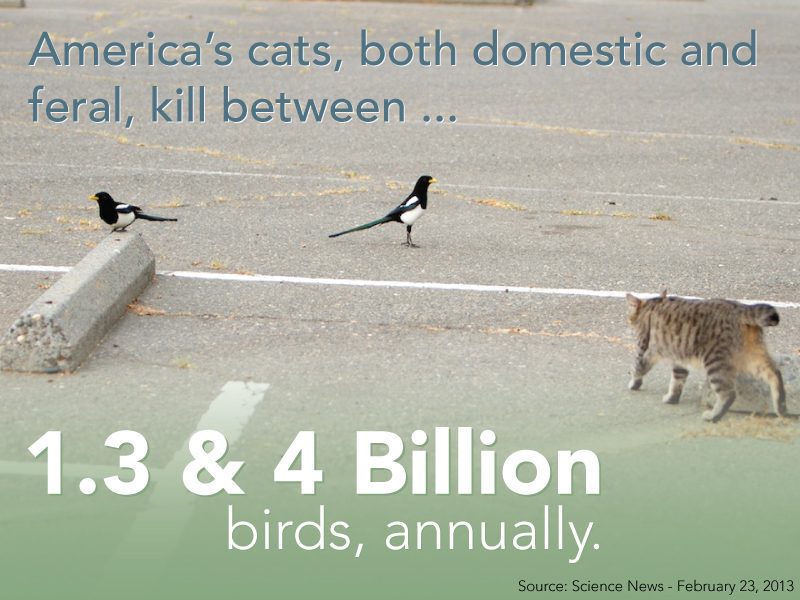 Karen Shapiro is with the UC Davis School of Veterinary Medicine.

"[It’s] a natural human emotion and reaction, but unfortunately we don’t often think about the broad ecological impact that that can have," she says.

Shapiro says not only do outdoor cats devastate bird and rodent populations, their feces carry dangerous parasites, like toxoplasma. When a cat is infected for the first time, it can shed hundreds of millions of parasite eggs, which persist in the environment for years. 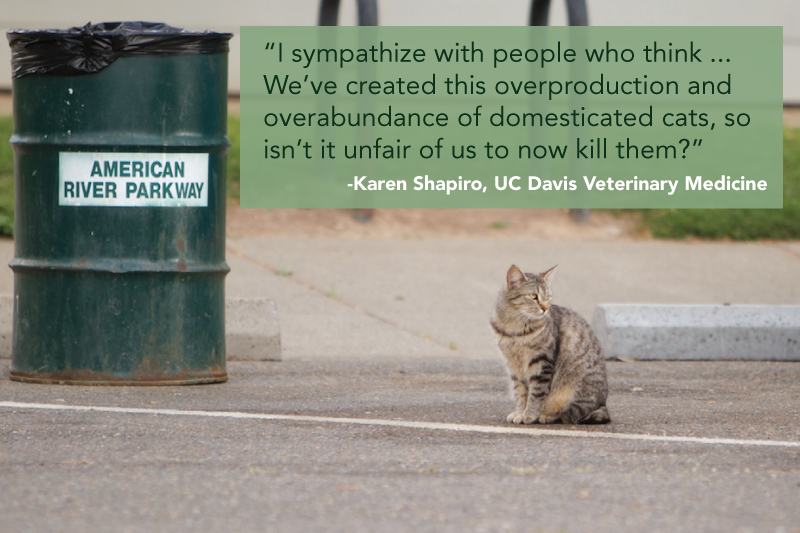 Most people who have toxoplasmosis show no symptoms. But the parasite can be fatal to people with compromised immune systems. Toxoplasma has also been linked to schizophrenia and behavior change. And Shapiro says it doesn’t just affect humans.

“So in California, Toxoplasma makes its way into the ocean through freshwater run-off where it infects a large proportion of sea otters. Sea otters are classified as threatened and infectious diseases are an important cause of death in these animals," Shapiro says.

Contaminated cat poop can wind up in our gardens, our storm drains, and eventually, in our drinking water. Shapiro says the cat population can be managed through neutering and relocation to barns, but cats will still kill other critters and shed pathogens. Shapiro likes cats, but she says feral cats are a problem.

"There is no easy solution. I think as much as possible, we should aim to reduce and eventually eliminate such cat colonies," Shapiro says. 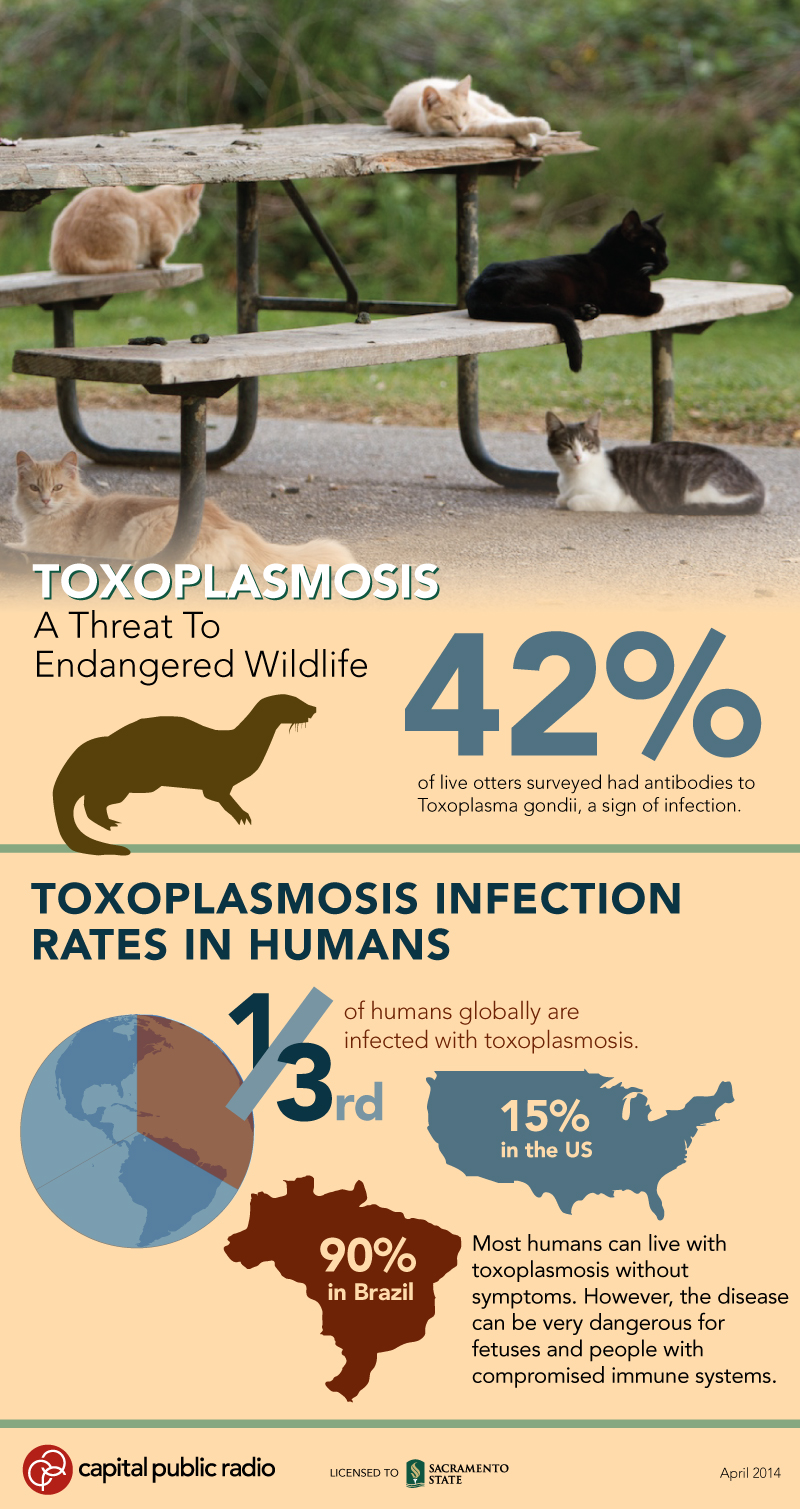 Discovery Park’s ecosystem was not on Doug’s mind when he shared his sandwich with a cat one evening.

“I was bored, I was really fishing. And the cats ran over to me, so I said, 'Well I’ll share some food with them!” says Doug, who didn’t want us to use his last name.

The cats attracted a small crowd of walkers around sundown, who for the most part, didn’t have a problem with cat feeding.

“I think it’s their home now, there are so many, I think we have to accept it probably,” says Tom Marr from Sacramento.

"I don’t think the feral cats are a problem as long as they’re spayed and neutered," says Shannon Brinkley. "I like them actually. They’re the river cats, that’s who we are, the river cats.”

Rumors have it a woman regularly feeds the cats, and has at least some of them neutered. Coyotes have been coming around the park -- they keep the population down. The county wishes people would take the cats home. But it’s hard to tell when a cat is feral, and when it’s actually someone’s pet.