Twenty-five million Californians and 750-thousand acres of farmland rely on water delivered through the State Water Project. But reservoirs that supply that water are dangerously low. The Department of Water Resources says it must take action to protect public health.

“Failing to take this action could result in our reservoirs running out of water later in the year which means no available water to prevent saltwater intrusion in the Delta,” said Water Resources Department Direcot Mark Cowin.

He says that would result in ruined water supplies for people in the Delta, central and southern California. California Fish and Wildlife Director Chuck Bonham said the Department will closely monitor migrating endangered fish that are likely to be affected by the move.

“It’s not about picking between fish and farms and people and the environment, it is about making really hard decisions on a real time basis where we may have to accept some impact now, to avoid much greater impact laterm,” Bonham said.

DWR says it would need to rain and snow every other day from now until May for the state to get back to average precipitation.

Agriculture will likely be affected the most by the move. Southern California urban water users still have a good supply of water in reservoirs.

All areas served by the State Water Project have access to other sources of water, such as groundwater and local reservoirs. 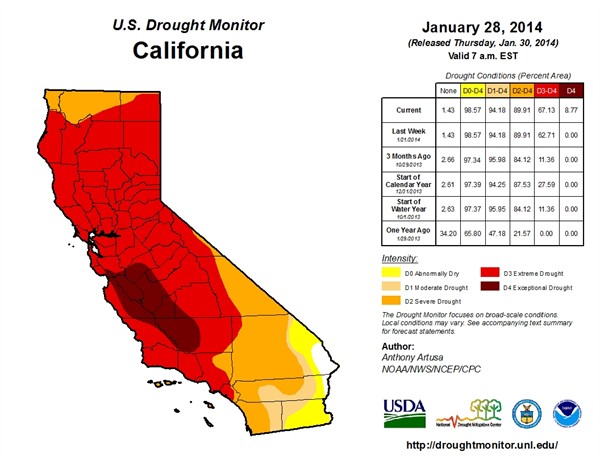 QUINTON: It is, in fact never in the state water project’s 54 year history has the Department of Water Resources announced a zero allocation to the 29 water agencies that buy water. This includes urban and agricultural users. The reduction will affect 25 million Californians and about 750,000 acres of farmland. But this drought is also unprecedented. That’s one of the things DWR stressed today, water reservoir levels are at historic lows. Officials fear that if they don’t slowdown the release of water in major reservoirs, public health and safety is at risk.

RAY: So what are the options for the water agencies?

QUINTON: There is a small amount of carryover water from 2013. All areas served by the State Water Project have access to other sources of water, such as groundwater and local reservoirs. In Southern California for example, the Metropolitan Water District has a good supply of water in its reservoirs. But this is going to hurt and people are going to be called on to conserve.

RAY: What other actions is the state taking with regards to this announcement?

QUINTON: As part of this, water quality rules will have to be adjusted. That means salinity could increase in the Sacramento-San Joaquin Delta, fish and wildlife could be affected…it could affect endangered fish. Drinking water standards however will remain the same.

RAY: How much is this going to help with water supplies?

QUINTON: As a result of this both the state and federal water projects will save 150,000 acre feet of water in upstream reservoirs in February. An acre foot is about two average California household’s water use for two years.

And this is temporary…at least we hope, they typically update allocations on a monthly basis. Assuming weather changes, it could mean more allocations later on. There will also be a public meeting February 18th and 19th to talk about these actions and what it will mean for California.