In Los Angeles, people have been hearing about the dangers of drought for decades. But in this land of infinity pools and backyard putting greens — better suited for rattlesnakes and scrub — water never seems to run out.

Yet little Redwood Valley in Mendocino County, which gets a bountiful 38 inches of rain in an average year and sits near the headwaters of the Russian River, has been devastated by this year’s drought. Each resident has been told to use no more than 55 gallons per day — enough to fill a bathtub and flush a toilet six times.

And in San Jose, where less than half of its usual rain has fallen this year, people have been asked to cut water use by 15% — a target that could become mandatory if locals fail to comply.

When it comes to the impact of drought, location is key. Rain and snow vary greatly across California’s myriad microclimates, leaving some towns, mostly in the north, accustomed to yearly refills of their rivers, reservoirs and aquifers. Others farther south have fewer natural supplies of their own, and in parts of the Central Valley, the drought never really left.

But drought resilience is manufactured, too. Decades of planning and extraordinary engineering and technology keep the water flowing to arid places.

“There is, of course, no single Northern California or Southern California when it comes to water,” said Peter Gleick, founder of the Pacific Institute, a global water think tank. “Water is a very local phenomenon. And every region and every water district has a different mix of water supply options and water demands.

During the last drought, in 2015, Californians were ordered to cut their water use by an average of 25% statewide. This time, there is no statewide emergency, no universal mandate and no standardized water waste rules.

Instead, residents are facing a patchwork of restrictions. Bracing for a crisis, towns relying on the hard-hit Russian River have imposed stringent mandates on residents and coastal communities may have to truck in water to make it through the year. At the same time, most of California’s urban hubs are prepared to weather the summer with only voluntary cuts and limited restrictions that in many cases are holdovers from previous droughts.

A CalMatters survey of the state’s 10 largest water agencies found only one — in San Jose — has issued new limits on watering yards, washing cars and other outdoor uses. Eight, including Sacramento, already had rules curbing irrigation and water waste on the books. And four, including water agencies in the East Bay and Riverside, have asked people to voluntarily cut back between 10% and 25%.

Even though Southern California is more arid, it’s better hydrated, too: That’s because it has largely relied on water transported from elsewhere, dating back more than 100 years in Los Angeles and 50 years in neighboring cities and counties. About half of the water that flows from taps in the region is imported, while half comes from carefully nurtured groundwater reserves and recycled sewage.

As a result, Los Angeles residents are unlikely to face new water restrictions this summer. After a soggy 2019 plus declines in water use since the last drought, the Metropolitan Water District, which supplies imported water to 19 million people in six counties, entered 2021 with record levels of water in storage.

The grip of drought even varies within single counties. For instance, one Mendocino County town is flush with recycled water and groundwater stores, but in another, residents are ordered to reduce use.

“We have a patchwork in part because (water) is managed locally,” said Felicia Marcus, who led the state’s response to the 2012-2016 drought under former Gov. Jerry Brown.

“The situation is dire in some places, and those places are making calls for higher levels of conservation,” Marcus said. “In other places, they may be prepared, or they may be dreaming.”

Southern California goes to extraordinary lengths to take water from elsewhere. This nature-defying engineering keeps the region replete with water even when little falls from the sky. (Downtown Los Angeles averages about 14 inches per year, about a third as much as Mendocino.)

First came the city of Los Angeles’ aqueduct — backed by San Fernando Valley investors and approved by voters in 1905 — sucking up mountain-fed streams and lakes in the Owens Valley and transporting it 137 miles.

But it wasn’t enough.

Then came the Metropolitan Water District’s aqueduct, drawing from California’s share of the Colorado River, snaking through the desert and tunneling through mountains to deliver water to the Los Angeles basin in 1941.

But that wasn’t enough, either.

Finally, the state in the 1960s began building a massive system to carry river water from Northern California, pumping it over the Tehachapi Mountains and through 700 miles of pipelines and channels to deliver it to San Joaquin Valley farmland and 27 million people, mostly in Southern California.

And that is enough — for now.

These three extraordinary engineering feats have made much of Southern California able to pull water from a variety of places all at once, transforming its landscape and satisfying the region’s thirst.

Los Angeles County also pioneered recycled water, building the nation’s first reclamation plant in 1962 to treat sewage and use it to replenish its aquifers. Neighboring Orange County has been a world leader in recycling water, purifying its own sewage and capturing the Inland Empire’s to feed its groundwater.

San Diego, too, has built up its resilience since the last drought. For decades it was almost totally reliant on Metropolitan Water District’s imported water. But since the 1990s, the San Diego County Water Authority has added desalinated and recycled water, built one dam and raised another, pumped groundwater and cut a deal to get Colorado River water from Imperial County. The water authority announced the region is “drought-safe this summer” with “no shortages or mandates in the forecast.”

“It’s really the growth machine of Southern California … by providing all this water to inland places, and allowing the sense that there’s unlimited water and the sense that you can build as far as the eye can see,” Pincetl said.

Still, she said, “You can point fingers a lot, but you can also be reassured that you can actually turn the tap on and have water come out of it, most of the time.”

But is it enough to weather droughts aggravated by climate change?

This year, California regulators announced that they would deliver only 5% of the State Water Project’s supplies because of extreme drought conditions.

Metropolitan, flush with funds from the cities and agencies it supplies, has spent billions to store water, nearly doubling its reservoir capacity with the completion of the $1.9 billion reservoir at Diamond Valley Lake in 2000.

Between stowing water in reservoirs, pouring it into aquifers and banking it in Lake Mead, Metropolitan Water District’s storage has increased 13-fold since 1980, shoring up supplies for residents from Ventura to San Diego to San Bernardino.

“We don’t see any need right now, because storage levels are still very good,” said Delon Kwan, the Los Angeles Department of Water and Power’s assistant director of water resources. “If you still have water in storage, why are you asking customers to do more?”

But water experts caution about the potential for more dry days ahead, exacerbated by climate change, so a gallon of water used now is one less saved for later.

“Maybe Southern California is happy this year and jumping up and down. But if this drought continues for two more years, what will happen? Would they be as happy in two years?” said Newsha Ajami, director of urban water policy at Stanford University’s Water in the West program.

Deven Upadhyay, Metropolitan’s chief operating officer, said that it could take several dry years in a row before the district imposes mandatory reductions in Southern California. “If we just continue to get dry year after dry year after dry year, there’s going to come a time where we’re going to be wrapping up messaging and asking for mandatory reductions. But that’s not where we are right now,” he said. 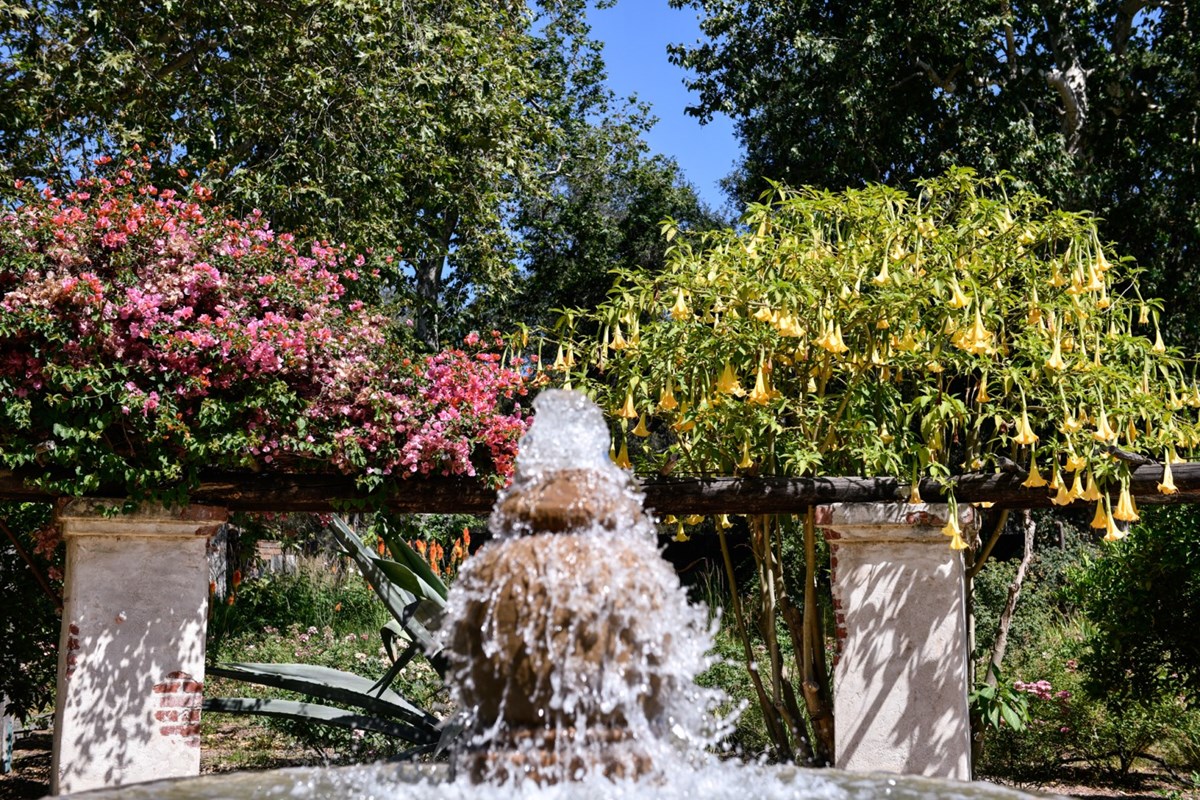 Still, some parts of Los Angeles County are already struggling.

Palmdale, an aerospace hub in the Mojave Desert north of Los Angeles, draws water from snowmelt off the San Gabriel Mountains, taps into the State Water Project directly and pumps groundwater to supply more than 120,000 people.

The Palmdale Water District doesn’t have enough storage to bank water during wet years or enough money to easily increase its supply.

“We’re not as financially nimble as some of the really big players,” said Peter Thompson, Palmdale’s director of resource and analytics. “We’re just getting to the point where we can start investing in those projects that have already benefited places like Metropolitan.”

Residents of this desert city, where less than an inch of rain has fallen this year, were asked in the spring to voluntarily cut water use by 15%. In July, the water district’s board may consider making it mandatory.

“Out in the desert, you need more water to keep things alive. So when we experience drought, then you also experience increased demand,” Thompson said. “That’s one of those double-edged swords that we deal with out here.”

Water is much more precarious in Mendocino County, which is isolated from state and federal aqueducts. Instead, residents rely on patchy aquifers and water that’s stored in Lake Mendocino and released into the Russian River.

Properties for sale along the oak-lined roads of Redwood Valley boast their water sources in the listings. One $675,000 home touts a water district hook-up and a seasonal spring. Another $699,000 listing flaunts its “elaborately designed 22,000 gallon water storage system.”

Known for its wine, weed and wild coast, Mendocino County was one of the first places where California Gov. Gavin Newsom declared a drought emergency.

In other parts of the state, “when there’s a problem, there’s a pipe and there’s a canal, and you can connect one water system to the next,” said Mendocino County Supervisor Glenn McGourty in a June meeting of the county’s drought task force. “We don’t have things like that in Mendocino County, so we’re going to have to be really creative in our solutions.”

This year’s drought is the most dire situation they’ve faced in decades. At the end of May, Lake Mendocino hit a record low of just 40% capacity. Earlier this month, the county faced projections that the reservoir could be dry by the end of the year. In response, the state adopted emergency regulations that could stop 2,400 water right holders from diverting water from the Russian River as early as July 5. 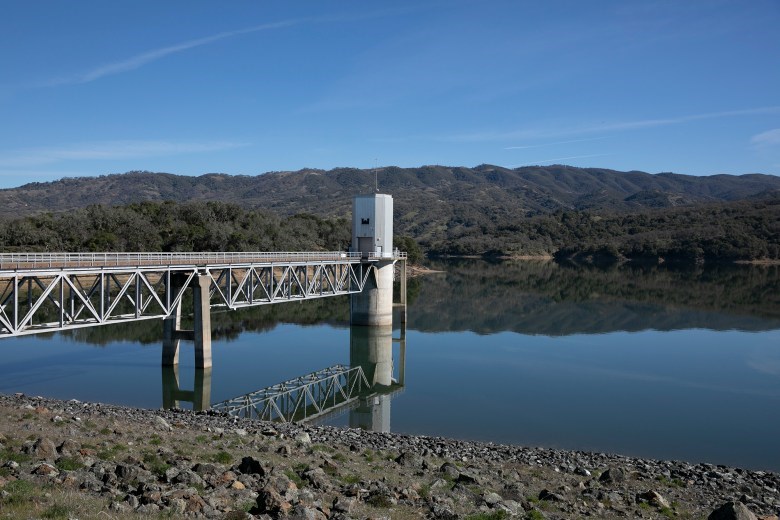