Rain In The Region Breaks A 52-Day Dry Spell

According to the National Weather Service a weather system is pushing into the area bringing rain in the valley and snow in the Sierra. The Weather Service is warning of slippery roads, possible debris flows and generally dangerous conditions between 5 p.m. Wednesday and 5 a.m. Thursday. Scattered showers are expected to continue through Thursday afternoon.
While this rain is greatly needed it estimated it won't be enough to end the drought, we'll need many more storms like this to make up for the months of below average rain fall.

Impacts Of The Storm 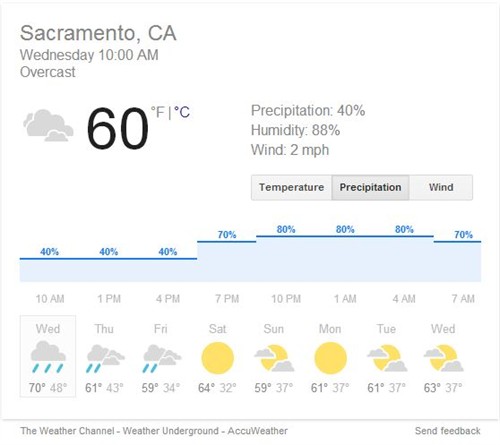 This screen shot was taken from Google.com Wednesday at 10 a.m.

Weather Tweets From Around The Region

It's raining in Galt! (I'm not driving) pic.twitter.com/rggxyg9Oef

Not exactly a nor'easter but better than nothing On Capitol mall in @thecityofsac pic.twitter.com/k0t8UO0duS

Shot of the traffic backing up downtown on I-5 near Garden pic.twitter.com/SkoVrs05KB

#bringit RT @comstocksmag: The rain is a welcome stranger on the streets of #downtown – our view from Comstock's HQ pic.twitter.com/paQocpC4fe

Here's the latest precip totals for the last 12-hrs over the region... how much have you gotten so far? #CAWX #Sacwx pic.twitter.com/mdVuT3TTOi