Brown Lays Out Agenda In Annual State Of The State Speech

Pressed for time and can't listen to Gov. Brown's full speech? Here's an abbreviated version with some of the highlights:

Extra Analysis and Commentary On The State Of The State

5:19 P.M. Our panelists - Steve Swatt, Beth Miller and Jason Kinney - stayed with us a for a few more minutes after the live broadcast ended. This is what they had to say about the relevance of the State of the State.
back to the top

2:30 P.M. Click on the image below and drill down to parts of the governor's speech that interest you the most with our special tag cloud. 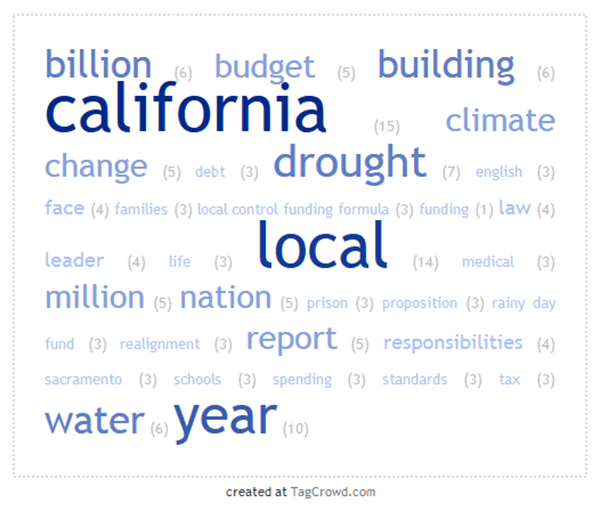 Reporters from KQED, Capital Public Radio, & KPCC have analyzed the speech, leaving their notes highlighted in the document below.

Health care wasn’t a focus of Brown’s speech. But the governor did mention health care in terms of costs to the state, and how California is a leader in medical technology and bioscience.

Brown said “tens of billions [of dollars are] needed to cover retiree health care” and he sees this as a long term budget liability. New health care coverage under the Affordable Care Act, such as the Medicaid expansion, are a “future risk” to state spending, Brown said.

The Governor highlighted the stem cell and biotech industry in California – citing that six of the nation’s top twelve metropolitan research areas are in the Golden State.

Brown said the state recently introduced a tax credit to foster medical technology innovation, an industry he says can help “cure disease and lower costs.” He says medical advances being developed in California will help “treat individual patients, instead of broad populations.”

California Gov. Jerry Brown has delivered another message of fiscal prudence in his 2014 State of the State address.

"We can’t go back to 'business as usual,'" Brown told lawmakers at a joint session of the California legislature in Sacramento.

"Boom and bust is our lot and we must follow the ancient advice, recounted in the Book of Genesis, that Joseph gave to the Pharaoh: Put away your surplus during the years of great plenty so you will be ready for the lean years which are sure to follow," he said. "Most governors and legislatures – in modern times – have forgotten this advice. This time we won’t do that."

He also called on Californians in every part of the state to conserve water to deal with the drought he declared last Friday.

"It is imperative that we do everything possible to mitigate the effects of the drought," Brown said, adding that it would be "a tall order" to do so.  In addition to water conservation, he said regulators must quickly move to voluntarily transfer water to where it's needed the most.

However, he only obliquely referred to his controversial proposal to build two tunnels underneath the Sacramento-San Joaquin Delta to transfer water to Central and Southern California.

Brown tied the drought to global warming, saying that even though it's unclear how much the current lack of rain stems from climate change, "we can take this drought as a stark warning of things to come.

Absent from the governor's speech this year was a major policy proposal such as last year's overhaul of California's school funding formula.  But he did put forth a big defense of that formula, which has come under criticism from some education groups as its regulations are implemented for lacking strict enough accountability measures for each school district.

"With six million students, there is no way the state can micromanage teaching and learning in all the schools from El Centro to Eureka – and we should not even try," he said.

Full view of the govenor's speech: 2014 State of the State Speech

State Of The State Pre-Speech Coverage

6:45 A.M.: One political writer thinks the State of the State address tradition is outdated and irrelevant in as state as large as California.

Joe Mathews is an editro with Zocalo Public Square. He says it's misleading to try to sum up all of California in one big speech.

"The issues and problems of the Inland Empire, with Detroit level unemployment, are different than the issues of the Bay Area, with a surging economy and relatively low unemployment," he says.

He says state and local officials could attend and ask citizens what their opinions are about the state of the state.

6:34 A.M.: The budget looks good, but the weather looks bad. California Gov. Jerry Brown will likelyaddress both topics in his annual state of the State address today.
Assembly Republican leader Connie Conway says she wants some straight talk from Brown.

“I really hope that the governor is a little tough and really gets to the point of where we’re at," Conway says. "We have a drought. We have money, but that’s because we tax people more. There’s so many questions.”

“It will be interesting what he has to say because, I think, we’re all very concerned that if we don’t see rain in the next two months, it may be a year before we do," says Leno. "And that will really, dramatically, impact the state economically.”

Leno says the state is facing uncertaintines due to the drought including fires an dother challenges.

"We need to put ever more money into our reserves and to restrain the legislature from making reinvestments in programs that have been cut in recent years," says Leno.

Brown will address a joint session of the legislature at 9 am.