The man suspected of being the Golden State Killer has pleaded guilty to a series of brutal crimes committed throughout California in the 1970s and ‘80s.

The 74-year-old Joseph DeAngelo entered the hearing room in a wheelchair, wearing an orange jumpsuit and a clear plastic face shield.

The judge read off a litany of counts against DeAngelo and asked him to answer for each crime. He pleaded guilty to all charges, including 13 counts of first-degree murder.

DeAngelo will receive more than two dozen life sentences, but the state of California will not pursue the death penalty. Final sentencing for the case will take place in August. There is no chance for parole.

The former police officer was the only suspect arrested in a violent crime spree that lasted more than a decade in California. The attacker was also known as the East Area Rapist in the Sacramento region.

He was arrested in 2018 after evading law enforcement for decades. Investigators used genealogy websites and DNA samples gathered at crimes scenes to solve the case.

"Forty-four years I've waited to hear him plead guilty," said Jane Carson-Sanders, who was raped by DeAngelo in 1976. "That's a long time, 44 years. But I went from being a victim to a survivor to a thriver.”

“It's the best outcome we could have hoped for under the circumstances," said Gay Hardwick, a survivor of a 1978 sexual assault. "But there isn't any justice, because all of us here today who are survivors, we've already served a full life sentence of over 40 years, which DeAngelo will never serve because of his age.” 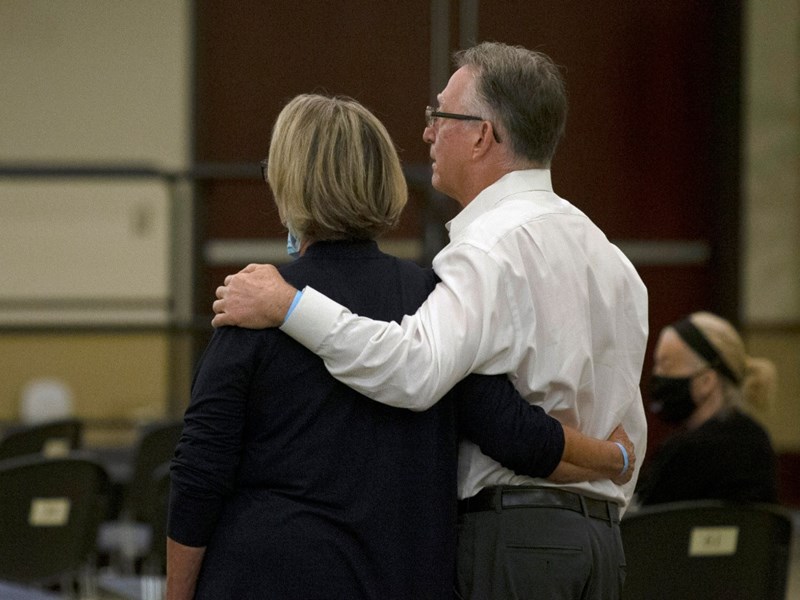 Gay and Bob Hardwick who were attacked in their Stockton home in 1978 by Golden State Killer, Joseph James DeAngelo, stand as the charges are read against DeAngelo during a hearing in Sacramento Superior Court in Sacramento, Calif. Monday June 29.Rich Pedroncelli / AP Photo

Earlier this month, survivor Margaret Wardlow told CapRadio Insight host Beth Ruyak that she wanted to see him spend a lot of time in prison, and not just at the end of his life.

“Speaking for the other victims, a number of victims wanted to know: ‘Why me? Why was I chosen?” said Warlow. “I think I know why I was chosen. I think I was very active in the community. I was out and about with the kids. ... So, the question could be why did you pick me and more over, how did he get away with it for so long?”

NPR interviewed comedian Patton Oswalt about his wife Michelle McNamara and her book about the Golden State Killer, “I'll Be Gone in the Dark.” He said he wanted to ask DeAngelo about questions McNamara had from him at the end of her book.

“You know, I would love it if I could just sit down and convey her question to him and see if he answers or not,” Oswalt said. “I mean, one of the good things has come out of this is that the survivors have gone to every one of his court hearings, and he cannot meet their gaze. They all look at him, and he can't raise his head and look at them. He's so reduced.”